I only eat sushi, pizza, pho, steamed chicken, and cookies. Yes, I own a super cute smart doll!

Latest posts made by Xaiyeon

RE: The new scratch sucks, and still no content.

Yea, for myself, I personally don't like any of the fashion in this AC... As for the content... New world beta launched and new world is coming out next month!! ngs is still my go-to casual game though ^^

Summer Heat bump!! We have a few slots open if anyone is interested in joining. 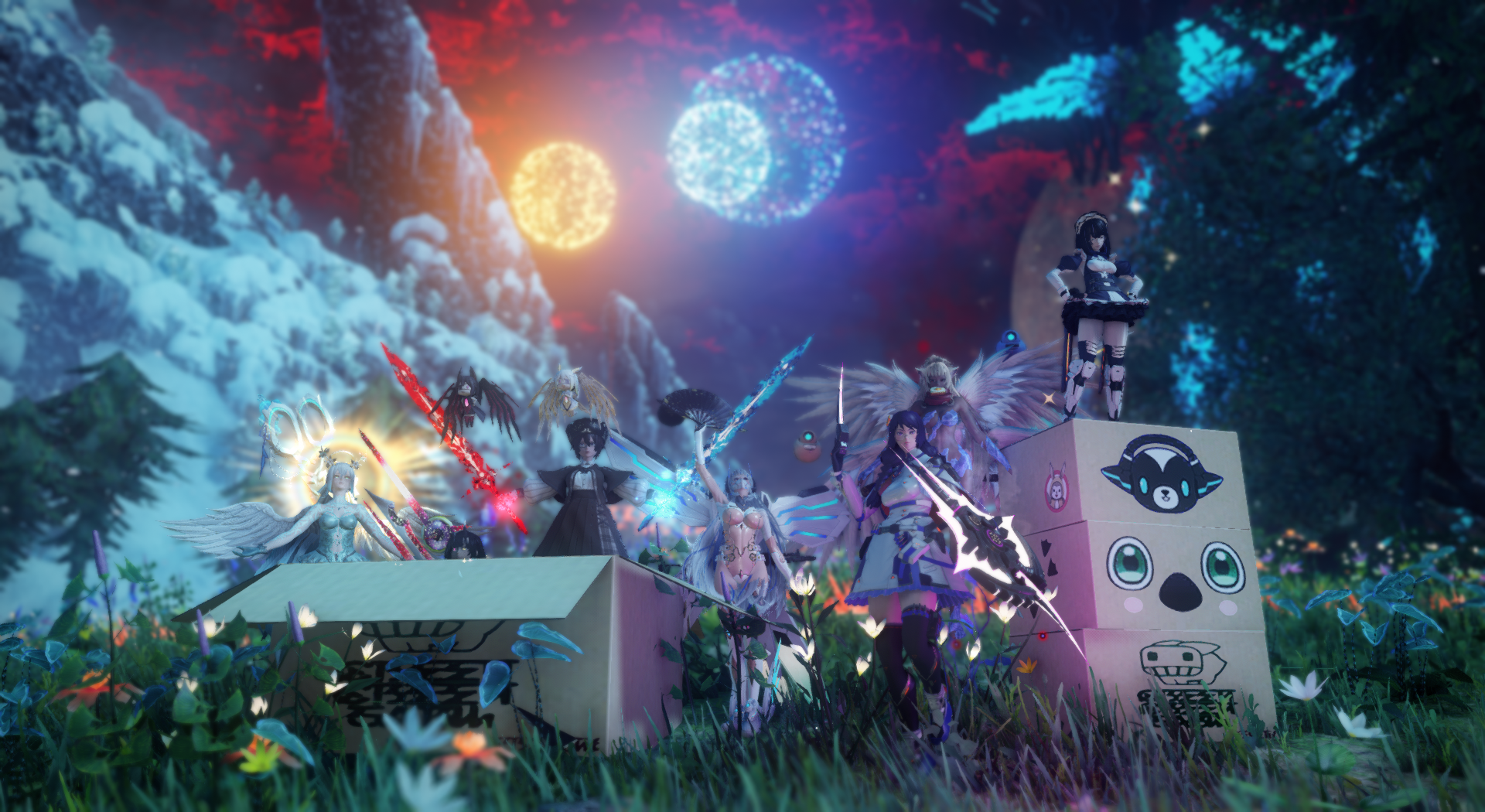 After looking, I also think the emotes one is the worth for me lol. I played base pso2 obviously, and don't really have anything I like in the other 3 revivals q_q/; it's much catered to those that did not play base pso2, which is perfectly fine ^^.

posted in General Discussion •
RE: The AC item reselling in Market problem

Yea, for your first paragraph I can see that happening, but that cautiousness and regret is a good thing. It would make the player more cautious on spending their N-Meseta; it would also affect scalpers, b/c scalpers mostly make their N-Meseta on high-popular selling items. When you buy something, you should know if you want it or not, so it's not the game's fault.

For your second paragraph, I agree.

For the third paragraph, yes, it is quite strange, but by taking the player's buying power of N-Meseta (and of course rewarding them a week later); it gives many players that legitimately want some items, a chance to get them in the short term; of course, long term holders may either make a profit or risk holding that AC item to a new better popular item/version or similar (or such as a revival). The idea I wrote was only a brainstorm outline, but it can certainly be much more in-depth on how to make it work properly. It's solely an idea though, for taking buying power away, which is important. Of course, what about the bots that might RMT N-Meseta? It would be difficult for them, b/c even if the total N-Meseta supply of a ship goes exponentially higher, the reward % for all players would also increase; so it basically keeps the economy in relative check, and people may not see the immediate need to buy N-Meseta (which you should not do), maybe b/c of FOMO of an AC item, because they wouldn't really see a difference if they do the math correctly by putting some N-Meseta in the N-Meseta Trust Fund and earning some back (I guess it's like a savings account lol, but better). The % is a direct reflection of the ship's economy; so it would work fine. What do you think?

Thanks for the reply.

posted in General Discussion •
RE: The AC item reselling in Market problem

Ten Square linked me here. I see lots of comment on binding as well. This was my take on it:

Yep, the only thing I can think that will regulate the auction house is; AC items can only have 1 transaction. That way, people that want to buy the AC item, will use it. For example, I buy AC, scratch once, and list the item, once someone buys it, it's bounded to that account. As for non-AC items (for upgraded gear) if a player enhances or affixes or both, etc. then the item should become character bound. This way SEGA can also allow transactions for those items to have 1 transaction count, but you can purchase a Gear-Unbound Tag (maybe for 200 AC), to be able to list those enhanced/modified player gear to the auction house.

As a new addition, the player shop/auction house should be accessible to all. F2P players can list up to 10 items, but will then get unlisted after 48 hours if no one buys it; and premium players can list up to 30 items (actually makes premium seem more enticing? lol), but have no time expiry until their premium expires. However, a lvl limit should also be implemented; maybe your character level should be lvl 10 or lvl 20 in order to list/buy items, so it prevents or discourages, not all, but most, meseta farmers from listing/buying own items.

On the other hand, SEGA should implement an N-Meseta Trust fund. It's pretty straightforward. Let's say I have lots of N-Meseta... You can donate 1M N-Meseta to an NPC, and this feature will then give you an ROI or a weekly/monthly (should be WEEKLY) allowance based on the total N-Meseta earned throughout the entire ship base (if you transfer ships, you don't get an allowance on old ship;). So, the more you donate, the bigger your allowance is. It's kind of like a mining pool in cryptocurrency or providing liquidity to banks, etc. This will also discourage scalping/flipping, as it would be much better to donate excess N-Meseta to the NPC (it's basically like burning your N-Meseta); Then maybe, you cannot withdraw any N-Meseta unless you buy and use an N-Meseta-Loan-Withdrawal pass (1 time only) for maybe 1000 AC. Now you might think that, won't this hasten inflation? No, it won't because then that N-Meseta is basically being recycled in the short term and rewarded a week later with adjusted inflation + some ROI depending on the player's % donated, which the player would most likely spend. How about if the player donates so much N-Meseta that their % is huge? Well, it should be up against the % of the total N-Meseta of the ship, and of course, that's okay, because at least it would prevent scalping when a new scratch comes out as well, because the player's funds are held captive.

Those are all my old and newly added solutions...

There are many creative solutions, but those are some I thought... Are there better ways? or what do other people suggest?

wow, looking for those hidden goodies in hereeeee x3

Yea these methods for making meseta have always been standard for base pso2 as well, but you may eventually get burnt out quicker, than enjoying the game or playing another game... or exercising, hobbies, etc.

Yep, the only thing I can think that will regulate the auction house is; AC items can only have 1 transaction. That way, people that want to buy the AC item, will use it. For example, I buy AC, scratch once, and list the item, once someone buys it, it's bounded to that account. As for non-AC items (for upgraded gear) if a player enhances or affixes or both, etc. then the item should become character bound. This way SEGA can also allow transactions for those items to have 1 transaction count, but you can purchase a Gear-Unbound Tag (maybe for 200 AC), to be able to list those enhanced/modified player gear to the auction house. There are many creative solutions, but those are some I thought... Are there better ways? or what do other people suggest?

Hello, we have a few more spots left o/; come hunt some Gigantix together

posted in Alliances and Discord Channels •
RE: Gigantix Issues

at least groups got progressively better through the day IME, just need the emergency maint -3- to fix the weather duration or make hunter's warcry useful for keeping aggroed monsters on the field, despite weather conditions...

posted in General Discussion •
RE: 90$ scratch bonuses seem to be the new norm.

To put into perspective and level with myself... Well, that's how it is... Instead of buying coffee and junk food/bad snacks for $90 a month... Sure, $90 bonus is a lot, but once you get a decent job, knowing how to budget, and understand your finances; the least you should worry about, is how much money you want to spend on an online game. In comparison, lots of AAA games are $60 and collectors edition are like $80, then there are mobile gacha games -cough- where you can YouTube search people spending into the thousands XD... again, imo, spending money on a game should be the least of your concerns in life ;A; I only go for bonuses or scratch if I like 70% of the items in the scratch or whatnot >w<.

EDIT: So I decided to try my luck on the new Wedding Scratch... But, with this current revamped AC pull algorithm, I feel like the rates are worse now than base pso2 was before NGS... Also, the prize list thing should be a bit lower like; 10, 15, 20, 25, 30, 35 ; 35 for the Glide. 45 is a bit much, I literally only got 1 featured pull from like 45 pulls... If any1 gets more than 2 featured items in one pull, then I wouldn't be sceptical, but I think the gachapon algorithm is heavily rigged :v, and not using true randomness q_q. This is just only an opinion though.