Latest posts made by Shebbie

I was so so sad to see that I wasn't able to get Phul's voice in the recent SG scratch and then it finally hit me, where even are the voice tickets in NA? Is there a particular reason why there aren't any voice tickets? Not even to sound sweaty or anything, I'm genuinely curious to why we can't get them. Is it licensing? Will we be getting them in the future? Do you all even care about voice tickets? If so, which voice do you hope to get?

Absolutely agreed. I didn't even know this was a thing, having never played on JP before—until a friend told me very recently and shared an example screenshot of exactly how they were laid out. It'd obviously help a ton with populating more of the ad-hoc content with likeminded people, such as the Casino games (ESPECIALLY Blacknyack or Mesetan Shooter), recruiting additional members for trigger parties, or Rideroid quests without having to sit at the Quest Counder tediously refreshing the party search menu or start one fr

This is the aforementioned screenshot my buddy showed me. For the record, he told me that most of these are quite simply designations, they're just normal blocks with a recommendation catering to a specific piece of content in its name—as the poster above me stated as well, with the exception of Expert, which was also very clearly pointed out in the OP. 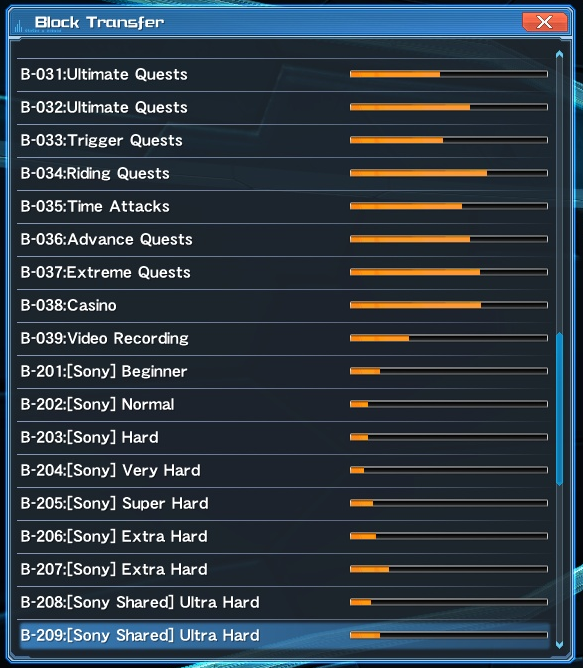 Thanks for sharing this! I think I didn't describe it well enough and people are misunderstanding what I'm saying LOL

Designated blocks on JP DO work though, when the content specific to them is actually relevant and worth running. Whenever there was a ult quest boost, the ultimate quests block would be full from people wanting to run ult quests, for example. Even just designating by difficulty, something incredibly basic, would go a long way to help.

Still hurts the current population who made block X their home, and if Block 1,2,3,7,8,10,17, 34 or 50 of Ship 1 was designated for 'anything' useful, it'd never be able to get people for that content since those are where stragglers usually end up and communicate filling the block with no purpose other than to socialize in mind or get people for random groups XD.

I dont think that it hurts ppl who make certain blocks there home. I only want the blocks to have better names. People can still go wherever they want but they might have a better chance in finding a party for a certain difficulty if blocks were renamed. I guess I should have said it like that LOL. Youre not gonna be jailed into certain blocks because of your level, but you can go to blocks where ppl in your level range would hangout or do quests.

I'd much rather have a designated block that you're able to log into if it's not full each time you sign into the game.

@Ephemiel thanks for your thoughts. I dont think it will separate the playerbase bc people can still go into whatever block they want to do. I just thought labeling would just make it better than just having all of the blocks say the same thing. In JP, getting into expert block wasn't even difficult, all you had to do was beat the Heaven and Earth Extreme quest. Again, clearing that gives you access to a block that bots wont be able to get into. Just my thoughts tho. Questing with people within expert block would just mean they have decent gear for good runs instead of doing slow runs with people with a wide range of gear. I liked how it worked in JP bc it didnt feel as restrictive as the way I'm making it sound I suppose.

Hey! So I used to play on JP and one thing that I really liked about it was how the blocks were really organized. If I remember correctly, The first 10ish blocks were for people doing "normal" quests, the next few were for "hard", then "very hard" etc. etc. There were also designated blocks for people who were just hanging around in the casino or people who were recording videos.A block I especially liked was "Expert Block". To get into this block, players needed to clear the "Heaven and Earth" extreme quest. This essentially forced players to get better weapons and units so they could clear it. This made XH EQ runs much more efficient as well.

If this were implemented again, it would make players (especially low level players) have an easier time finding a group for Urgent/Emergency Quests. Having expert block back would also be a great escape from bots spamming chat since they wouldn't be able to get into them. This is just a small quality of life thing, but I do think it would be a great thing to include in a future update.

TLDR; Change block names to difficulties and bring back expert block to: