Latest posts made by SamuraiCrazy

my question is do you have to buy both packs to get the rewards or can you buy a 90day and get both?

Based on the rewards for each, it seems likely that you would have to buy both packs to get both sets of rewards, since both sets can be claimed once each..

You need to get 90days worth of premium. I bought a 90day premium pass and instantly got the sword emote.

Items on the fresh shop won't be there tomorrow. Get them now, or wait till they show up again some day.

Is there a particular reason we are getting randomly kicked from the server? If I get booted off my wifi, it's one thing.... but being kicked from server during an advance quests and not being able to rejoin my party is quite annoying. It would be nice, especially after paying costs to enter the quests. This includes and is not limited to, advance quests, Dark Falz triggers bought with SG.... This is the only MMO I have ever played that I could not rejoin the instance within a time limit since the disconnect. Why this hasn't been fixed I'm this games 8yr lifespan, I do not know. ...but surely, it is time.

posted in Technical Issues •
RE: New Recruits! Have a question? Post it here!

@GM-Deynger any update on the fresh finds shop?

posted in General Discussion •
RE: Client Order not working at all

Having issue with other orders after that one. Many say to do on Hard or higher. While the symbol is there next to the expidition difficulty, it will only count on super hard.

posted in General Discussion •
RE: Complaint about the Xbox live gold requirement

You could be playing on the jp servers for free, on pc. But here you are.

posted in General Discussion •
RE: Client Order not working at all

I had the same issue with the Braver order. I think it's probably messed up for all classes.

posted in General Discussion •
RE: Crafting option not available

Crafting is not an active function at this time. @GM-Deynger any idea when it might be added?

posted in General Discussion •
RE: Crafting option not available

Crafting is not an active function at this time. @GM-Deynger any idea when it might be added?

posted in General Discussion •
RE: Mags

You have to forgive me for not being well versed in the localization of PSO2NA yet. But I assume Excubes still being named Excubes in the NA version, check the Excube Shop on the 2nd floor in the Shop Area. There should be a girl similarly named to the person in the picture below (Nysa) I believe she is named Nisa or Neesa in PSO2NA. (At least her appearance is the same, so go with that.) Look for the item highlighted in the picture, or at least identical to. If it's not there, then I assume the item isn't released yet in the OBT. 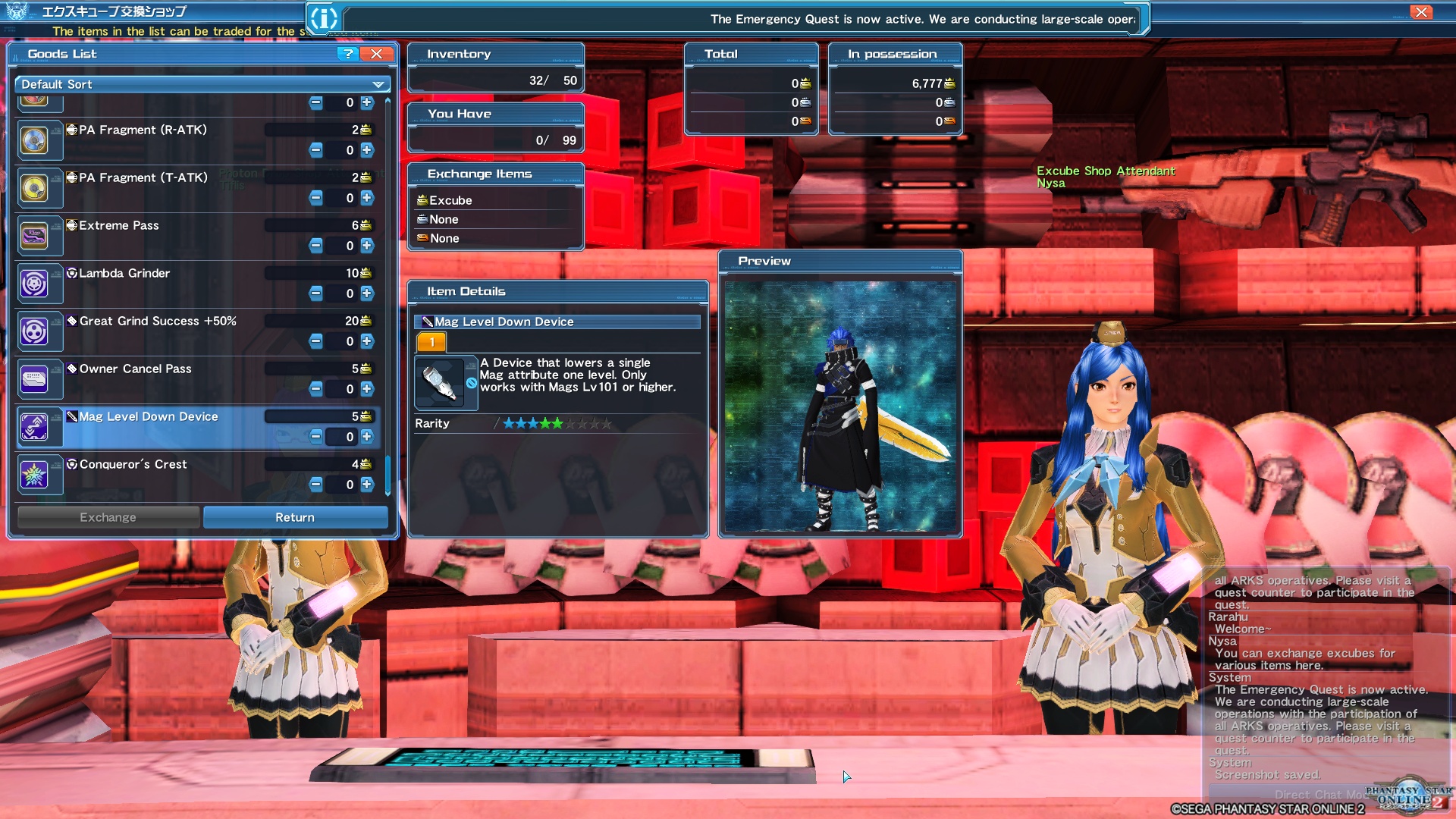 Yeah found it. Seems they have to be level 101 or above to use it. Thanks!