I played on the Japanese servers for PSO 2 for a while. It's good to be back!

Latest posts made by Home Dog

RE: Severe underestimation of the immense amount of players joining Ship 02

@Zarozian said in Severe underestimation of the immense amount of players joining Ship 02:

@Pawrubs447 said in Severe underestimation of the immense amount of players joining Ship 02:

@Home-Dog said in Severe underestimation of the immense amount of players joining Ship 02:

I think this is a severe overestimation of the influx of players that the PC release will bring. As Ragnawind stated, there will be room.

Yeah this didn't age well lol. But to be honest, I am glad there is a HUGE influx. Only not the part where nobody can play right now because everything is broken on ship 2.

@radiofr33 yeah no updates. But I just heard that there was one this morning and that's not on the schedule. So that's kind of annoying. I missed it. T_T It was very early in the morning.

Especially considering this is the event one... I was really excited for this and was disappointed it wasn't the event one in the end.

Yeah it's really unlucky. Hopefully we get the event mission tomorrow.

Unless this is actually a bug , the current Urgent Quest schedule was incorrect. Perhaps the color coding was goofed up? Here it says the Urgent Quest: "Gone With the Wind and Rain" is scheduled to be after the concert at 7:30pm PDT and Wed the 27th. However, after the concert it was announced that Dark Falz is approaching the ARKS fleet. 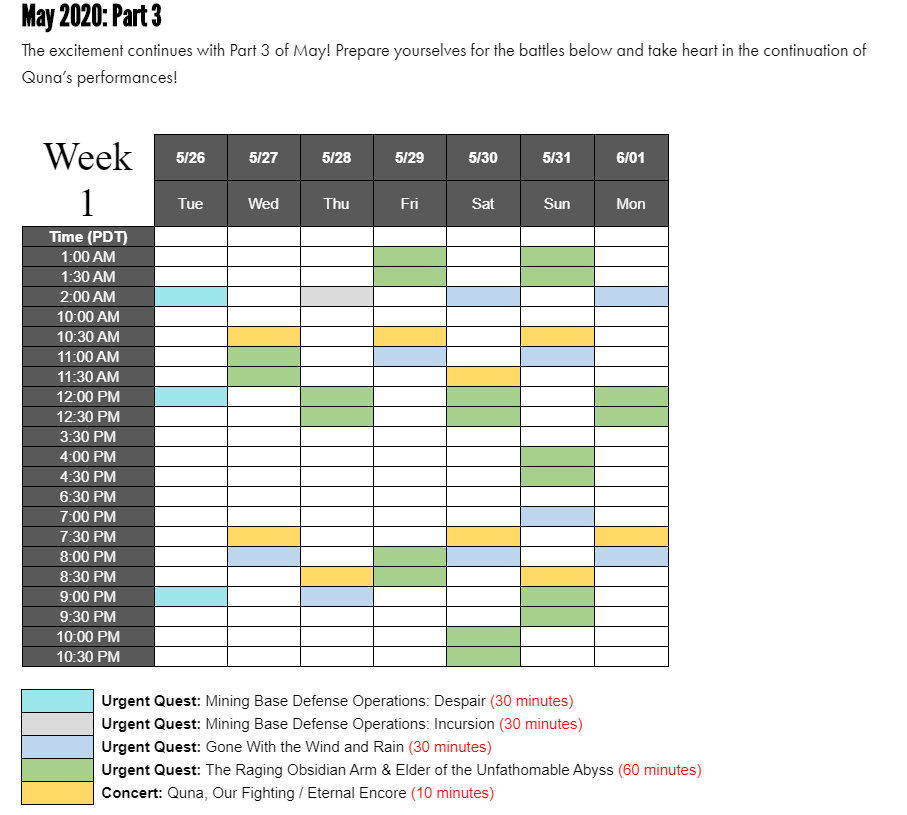 This is somewhat bothersome for alliances that form large MPAs. This isn't the first schedule mistake either. Please double check the schedule to make sure that the future Urgent Quests are correct!

posted in Bug Report •
RE: Regarding Mission Pass Season 3 and PC Players

It will expire and not carry over! So if you do get it, make sure to get every gold star you can so you can unlock those tiers. Definitely doable. Having multiple characters can help with that by doing dailies on each of them. And like AndrIch said you can purchase tier's if you don't want to worry about that at all.

posted in General Discussion •
RE: Severe underestimation of the immense amount of players joining Ship 02

I think this is a severe overestimation of the influx of players that the PC release will bring. As Ragnawind stated, there will be room.

posted in General Discussion •
RE: My character name was changed.

From what I was told, GM's are handling players with offensive character names one by one so if you did have a name that somebody would find offensive it may have been changed for that reason. Players can also report this in-game so make sure the name is suitable.

posted in Technical Issues •
RE: SG cosmetic "sales" and the current state of SG.

@Shadowth117 said in SG cosmetic "sales" and the current state of SG.:

@Cathy said in SG cosmetic "sales" and the current state of SG.:

For the benefit of the doubt i'll assume this set was planned before all this criticism in this thread but holy shit this is the worst SG sale so far.

Remove that trigger and useless Tri boost and split it in Male and Female bundles. If not then just make it an AC bundle and be honest that you want people to spend 40$ on two not-resellable costumes.

It was AC scratch stuff originally too. You had to pay a lot for the emote, 25 scratches, but consider that 25 scratches also means you get 25 different AC items with that. This just gives you the emote, 2 outfits, 2 hairs, a trigger, and a crappy ex rdr boost (seriously, why the trigger and the boost?). The value just doesn't seem as good and it's quite a bit, especially for 2 things most won't care about, no to mention the male and female stuff being together.

There's a lot of room related items in that original scratch that I would like they they could have included.

And on top of being so expensive only 1 of each hairstyle and emote so we have to choose which character to use it on.

I think it would be nice if they had an update where they gave everyone 2 of every item ticket they have ever bought from the Fresh Finds shop. And then from there forward, no more x1 of anything. Only x2 since all Fresh Finds item ticket purchases.

posted in General Discussion •
RE: Thank you all for the help

That is your alliance accessory. You can un-equip it in the alliance commands menu.

posted in Technical Issues •
RE: SG cosmetic "sales" and the current state of SG.

@GM-Deynger said in SG cosmetic "sales" and the current state of SG.:

FYI, all of this constructive feedback is being gathered and passed along. So you are heard, just letting you know.

Thank you! Really glad to hear this!