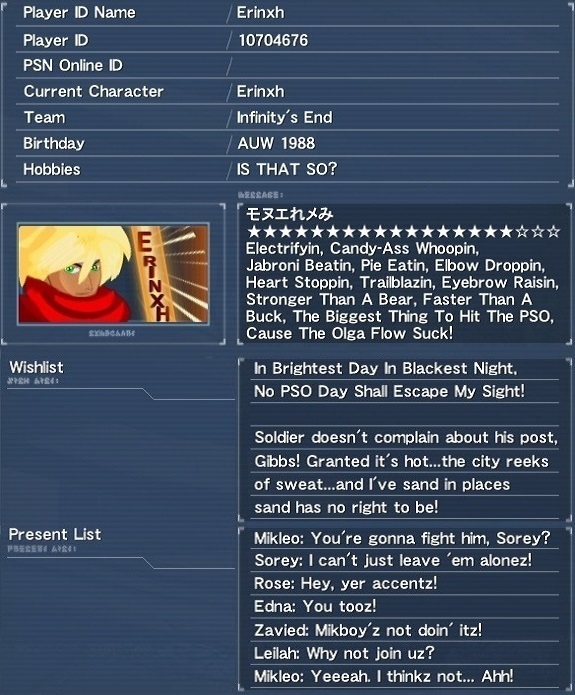 Latest posts made by ErinXh

@HarmlessSyan Totally forgot about that Class, forgive me.

@Riesz (Sorry y'all, gonna use JP terminology for this one.) I feel ya man, but this has been Sega's way for a long time. Leaving behind unfinished business when it comes to releasing classes. It kinda bugs me when they don't finish their 'Trinities'.

This is where weird stuff started to happen with classes and combos got broken. Not getting that R-ATK & T-ATK class triggered my OCD, still hurts.

We all make mistakes, thus thou art forgiven. After seeing the errors of their ways, Sega turned a new leaf and adapted a new trinity approach. 3 weapons per class with one of each ATK type.

Had expected and would liked to have seen a third class with the 3 different ATK type weapons. I thought it was meant to be, as it was written in the Akashic Records and foretold by the ORACLE...

*Disclaimer: I am not sure if Luster is R-ATK based, just an assumption of the class trailer. But it sure ain't S-ATK, R-ATK & T-ATK.

posted in General Discussion •
RE: Can someone tell me what the song is for "Tokyo Silver" bonus mission?

@Brave said in Can someone tell me what the song is for "Tokyo Silver" bonus mission?:

@Jay6x said in Can someone tell me what the song is for "Tokyo Silver" bonus mission?:

The night variant of Tokyo's music is called "Realization". Ep4 does have some dope tracks.

The Ridroid mission for Las Vegas uses a song called "Neon Days" or "Neon Nights" depending on whether you're there in daytime or nighttime.

Do you have any idea if there are any other songs by the singer?

says "haruna," but the only one I saw with that name doesn't sound the same as the one in the pso2 songs.

Which song in particular? Realization is done by Florence McNair. Neon Days and Neon Nights is done by Runblebee.

Florence McNair, Karen Flower & Aimee Blackschleger are the more prominent vocals for songs in the later Episodes of PSO2.

The three only perform one song together, the ending credits for Episode 6 to conclude the full story of PSO2 'Thank You'. The legendary Takenobu Mitsuyoshi lends his voice for it as well. And of course it is composed by Hideaki Kobayashi, quite fitting to end it all.

posted in General Discussion •
RE: Crossplay

Let me propose this. Tell each other in real life on which block you're going to meet, for example Block 12. (Preferably a secluded Block.) Go to the same location in Block 12, for example in front of the weapon shop. And you should see each other in-game.

posted in Technical Issues •
RE: Crossplay

You don't need to do anything special, just make sure you and your friends play on the same SHIP. That's all.

Daily crafts can also reward Naverius and other planet crystals.

In the JP version, the rewards are linked to specific days. On the 4th, 9th, 16th, 19th, 21st and 26th day of the month, the daily crafts can reward you with planet crystals.

Going to assume the monthly rotation to be present in the NA version as well, but I have no idea if the rewards per day matches with JP's.

posted in Guides & Help •
RE: PSO 2 day continues to get worse and worse

The Rappy egg started out as paid exclusive content in 2016, buying the 'PSO2 Episode 4 Deluxe Package' or 'PSO2 The Animation Blu-ray / DVD Volume 6' was the only way to get a Rappy pet. A year later, in 2017 they added the Rappy egg as 'drop' into the game. To finally, after 4 years making its appearance as a CF.

Assuming PSO2NA will have the Rappy Egg only as a 14★ CF as well, it will probably take a while for it to appear.

posted in General Discussion •
RE: Give people the live boost even if they don't attend the concerts

This is partially already implemented. As long as you're anywhere in the Gate Area or Shopping Plaza you get the live boost, so you don't really need to attend the concerts. But I assume you want the live boost to cover Franca's Cafe, Casino Area, Challenge Block, Gateway Ship, Personal- & Alliance quarters as well?

I personally use the Gate Area for getting the live boost when I don't feel like attending the concert, works fine for me. I am not sure if it also works in Franca's Cafe & Casino Area, never bothered to check. (I assume not, due transferring.) I do know that the Challenge Block, Gateway Ship, Personal- & Alliance quarters won't get the live boost.

posted in In-game Suggestions •
RE: What's the biggest mistake you've made so far.

posted in General Discussion •
RE: Ask a veteran ARKS!

@Blackichan08 They are starting to like you, assuming you are talking about this?

If so, it means that their affinity with you has increased. You can get various rewards when you talk to them in the lobby after clearing certain affinity thresholds. (A present box icon above their heads indicates that you met a threshold.)

You can raise their affinity by completing their Client Orders and or bringing them along for quests. Additionally, if you take them along for 10 & 100 quests you'll earn titles too.

Do note, not all of them will have rewards. In particular 'limited/temporary' NPC's won't.

(EDIT: Just noticed this to be post #665 of this thread. The next post is going to get NOL'd.)