Latest posts made by A Silver King

RE: Even Rappy Burst is abandoning PSO2 NGS. lol

Another question to ask is why is a sega employee going into a fan server and leave rude replys to people? And slander Rappy Burst. Is that what sega is paying them for? or were they off the clock? 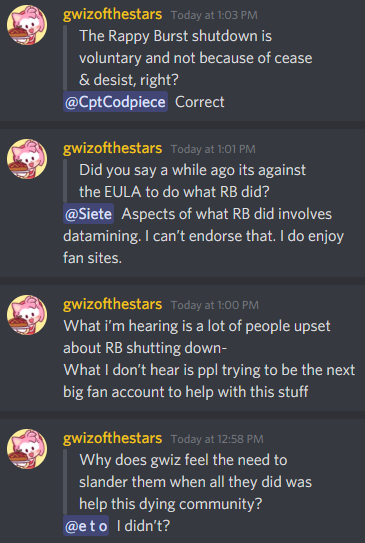 posted in General Discussion •
RE: Even Rappy Burst is abandoning PSO2 NGS. lol

Is there any confirmation they were banned from fleet?

Also looking though there personal twitter they have done similar things before about saying transphobia.

I'd post ss of deleted tweets but you know

posted in General Discussion •
RE: How would you feel about a relaunch?

I mean global got screwed with sg and ac support scratches that they thought would be useful in NGS however they nerfed pso2 gear for ngs and only announced it AFTER the game launched.

posted in General Discussion •
RE: So are NGS forums just not happening anymore?

It's clearly reallocation of sega human capitol after the decline of the forums daily users. they shifted to discord and reddit where community mods handle moderation. I'm guessing sega does not see value in them anymore.

posted in General Discussion •
RE: Why SEGA wants NGS to fail? (my love letter to a dying love one)

@HarmlessSyan said in Why SEGA wants NGS to fail? (my love letter to a dying love one):

@AngryRhombus563 said in Why SEGA wants NGS to fail? (my love letter to a dying love one):

Been playing FFXIV more and there are tons of sprouts (new characters) in roulettes these days on Crystal - the current recommended data center with exp bonus. Whether or not they came from NGS, that game is definitely growing in anticipation for the new expansion despite the current content lull. Can't say the same for NGS.

Ya I started ff14 after playing pso2 for 7 years. Their attitude during the interview about the game made me lose hope for the time being.

posted in General Discussion •
RE: So, in regards to the recent revelations about getting banned for ERP.

Iv'e thought about this and its actually a braindead policy that seems like was put in place because of the streamer. I'm pretty sure some C-level told them to clean it up and get it done however.

Whats to say someone didnt get chat muted/temp banned before and then false reported now. Now the gm looks through there chat history and perma bans them for something they were already punished for.

That with them giving proof will likely result in people who got temp banned getting perma banned if one gm finds something more offensive or a policy has changed since the temp ban. Without them giving the real reason you were banned its pretty much the decision of some support staff that may be having a bad day. I'm pretty sure they don't give the reason so you dont fight the ban.

As far as iv'e seen no one has appealed a ban.

posted in General Discussion •
RE: So, in regards to the recent revelations about getting banned for ERP.

Just be nice to people its that easy.

posted in General Discussion •
RE: My Thoughts on the Recent Bans and the Tweet About Toxic Behaiviour

@Berserk-Nevi said in My Thoughts on the Recent Bans and the Tweet About Toxic Behaiviour:

posted in General Discussion •
RE: My Thoughts on the Recent Bans and the Tweet About Toxic Behaiviour

Dreamweaver has stated that the threads staying up is because of how the forums is set up not because they want them to be.

posted in General Discussion •
Japan has examples of what not to say/do so global should too!

Given all the recent controversies I think it would be good if this was translated/adopted for global since people are wondering what they can and can't do.