As we all know, the ARK in New Genesis are simply the inhabitants of Planet Halpha.

However, our characters are beings known as the Meteorn, mysterious people who crash into the planet, bound in stasis pods, with their memories wiped, but nonetheless fight for what is right.

Now, [Final Spoiler Warning] for those of you who have completed PSO2´s storyline in JP, you know that Shiva/The Profound Darkness asks the hero to join them, warning them that even should they manage to defeat Darkness, society would never accept them and, fearing their power, once there is noone left to fight, they may turn against them.

Could it be that Shiva/The Profound Darkness was right all along, and that an indeterminate amount of time after the story of PSO2, society betrayed us and decided they were better off without us and sealed us away in stasis?

And perhaps, to add to the drama, the mysterious DOLL that are attacking the Arks and planet Halpha are commanded by someone who went rogue after our unjust imprisonment?

Now, this theory is not without flaws, the biggest of which being that the story of NG exactly happens 1000 years after PSO2, and we all know that in the Phantasy Star lore, The Profound Darkness awakens/stirs once every 1000 years, so most likely the Dolls are simply the latest Profound Darkness/Dark Falz move.

This could also mean that we purposefully went into stasis ourselves after discovering that the PD had not been completely eliminated, and our memory loss is simply due to how long we were frozen.

But personally, i would love to have a dark turn in the story and for the betrayal theory to be sound, because it would put the NG story into prespective, with our character having to choose whether to trust once again and whether to ally with PD this time around, considering it had been right about us and them in the past.

Anyway, feel free to share your own ideas and theories.

Found this meme on Reddit, but at least we have an idea of how badly this new storyline can spiral out of control in terms of catastrophe.

My guess is that Xiao was calculating beyond the scope of episodes 6-7, and made Xiera take over from there while he pulls a Xion stunt to set up NGS protag from the past, or our present as of Episode 7.

I mean really, the only ones capable of wiping the minds of an entire crew without crippling effects would be Xiao and Xiera in the first place. 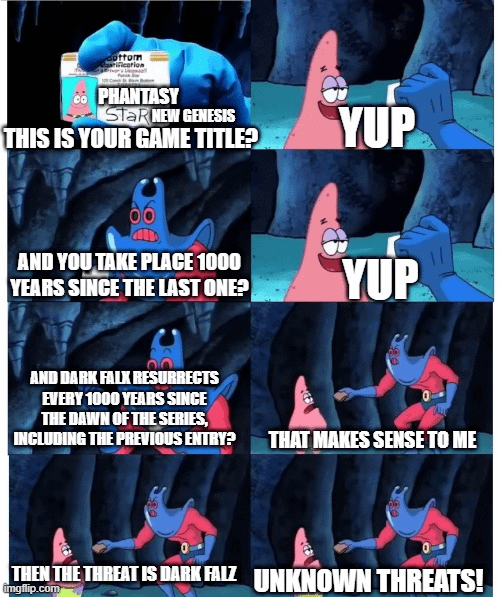 If you think you can make any meanigful choices, you are in for a rude awakening. Your characters comments are, as they always are, just pointless drivel so they don't need to make someone else repeat what your character said as a question every time they say something. It can be summed up like so: "I'm a hero" or "I am THE hero".

The Meteorn makes me think of escape pods. Maybe we'll get an Episode 7 to explain it. well, IDOLA takes place at the same time as NGS so...