There is now a new thread for this being maintained by someone else.

JP has a lot of OT weapons that Global at this point will never get at this rate. However, some of these offer good utility... and even moreso, some of them make for incredible looking camos for people's specific outfit. Even JP would like some camo revivals of some OT weapons that don't drop anymore -- I've seen people paying 350m+ for 10* weapons just because they don't drop and they're THAT rare and they fit their entire outfit perfectly.

I intend to make this a community fueled thread. If anyone has any suggestions to make into NT weapons or for camos, feel free to list them and I'll update this. If there is a reasoning, especially for NT weapon requests, listing it could be helpful as well. Listing the type of weapon can help me have an easier time updating the thread as well.

If you wish to remain anonymous when requesting feel free to PM me on the forums instead.

Resources for searching for weapons can be found via the arks-visiphone website (JP version) or the pso2 swiki.

Mar 11: Another small update.
Feb 19: Slow on updating, but finally got around to it.
Dec 18: Thread updated with more requests from the community
Dec 11: To my surprise, Shut Rounder got a camo in the Photon Booster shop. I dunno if this was after they saw this thread or not, but that was an amazing surprise.
Dec 07: Added formatting that I found by accident. Added suggestions from posts, including a lot of TMGs, as well as a couple harmonizers.

-- Helen Bathina (エレヌバティナ) Katana - Old Type weapon on JP from PSO2es which is a Katana for all classes. The potential restores 15% of PP when you take damage -- but more importantly, it has built in Morning Mistreaver PA on it, giving all classes access to a good movement PA.
In my opinion, this needs to be a high priority. This is fairly important for a lot of classes for mobility, since some of them just simply don't have good fast movement PAs like Ranger -- especially Ranger/Etoile. Even Etoile as a mainclass often uses it for movement, as well as Gunner, Hunter, Fighter, and probably more that I'm forgetting.

-- Noridonique (ノルリドニーク) Assault Rifle - Has Homing Volley built into the rifle for all classes, which would also be nice to see come over to global, but this is purely for people running time attacks. Definitely not a necessity, because the only time it really sees use is for the speedrunners on Lillipa Time Attack that aren't using Swift Ilgrants to hit the first button in order to get a rank 1 time.

-- Rose Skewer (ローズスキュア) Harmonizer - All class harmonizer that enables using a pet on any class. With EP6 around the corner there should be a new 15* harmonizer that can take it's place, but a more easy access one would be nice for newer players to be able to use Summoner as a subclass while leveling other classes. Also makes for a kind of nice camo (which is apparently now available on JP)

-- Storm Shade (ストームシェード) Rod - Requested by PrinceBrightstar. 11 rarity rod from a Beach Wars event that never got an NT variant. It's an all class rod with Anti, which is very useful if you run out of Sol/Star Atomizers.

-- Duel Gaze (デュエルゲイズ) Talis - Requested by AiC-L. There's also a Green and Red colour variant of this talis. Only exists as OT, and has a very, very strange potential which is meant for .... ranger. Side note is that there is a yellow/white/cyan version of this as a camo on JP from the TCG memory exchange called ＊デュエルゲイズＴＣＧ, so this shouldn't be too hard to do since a camo already exists in the files in the first place.

-- Guld Milla (ガルド・ミラ) TMGs - Requested by AIC-L. Iconic PSO weapon which never got an NT version or a camo.

-- H44 Missouri T (H44ミズーリT) TMGs -- OT 10* weapon that have a potential from PSO2es that lowers the recast of Chain Trigger by up to 12.5 seconds based on the Chain Trigger count if used for the first PA of a Chain Finish. While this could be made into NT, I feel like this potential with NT crafting could be a bit too dangerous to safely add... but it also saw use as a camo, so.

-- Cruel series (4 weapons) -- An old 9 star series containing a Gunblade, Twin Daggers, Rod, and Wand. The Gunblade (クルールコフィン) and Twin Daggers (クルエルフローガ) were both requested by IceBlink, but Church10129 noted that we could probably just have a 4 weapon camo that includes the Rod (ヴァイフロース) and the Wand (コルネリア) on top.

-- Hyakka Ryouran (ヒャッカリョウラン) Soaring Blades + Tenimusou (テンイムソウ) Double Saber - A specific request from Church10129 for a camo that can't be colour changed so that the alternate red + blue colour blades exist in their original glory.

-- Phonlieses (フォンリーゼス) Sword + Rimliese (リムリーゼ) Wired Lance - Requested by LightGamer2016. 11 Rarity OT Sword that dropped off Dark Ragne, with the Wired Lance coming from one of the small bug darkers that that has a stunning spin attack. Both of these were weapons that went with the outfit series クインティリーゼス. The Talis (クインロセウム) could probably be added in this too, but it's a different colour scheme.

-- Red Scorpio (レッドスコルピオ) + Guilty Light (ギルティライト) Launchers -- Requested by Ryoga. Part of a series of 3 launchers that were 11 rarity.

-- Haze Series (Partisan, Sword, RIfle) -- 3 Weapons that all dropped from Haze Drahl. Partisan is ヘイズオディオ, Sword is ヘイズヴァイア, Rifle is ヘイズエヴォル. Requested by Ryoga, with additions by Church10129.

-- Firearm-C (ファイアーアームズ) Rifle - Requested by myself. This is already viewable in Global (Challenge: Strike quest in Challenge Mode) but is not available as a camo or as a weapon that can be used outside of Challenge Mode.

-- Flame Visit (フレイムビジット-NT) Launcher - Requested by Ryoga. Mostly for camo purposes, originally requested as OT to Camo but it has an NT version from PSO2es.

-- Yasminkov 8000C (ヤスミノコフ8000C) TMGs - Requested by AiC-L. Mostly for camo purposes, but it does have a 13* NT version that does not exist on global because it's only available from PSO2es.

-- Mercy of Lillipa (＊マーシー・オブ・リリーパ) - Requested by an alliance member. Only a camo and an OT weapon on JP. OT weapon was from an Episode 2 deluxe package (which gave green badges to turn into whatever from the shop), and the camo I think required you to have this OT weapon to get it. This only applies to bow.

-- Chain Belk (＊チェインベルク) - Requested by Ryoga. Sword camo based on the Chainsawd sword but with black and red colouring.

-- Elydorado (＊エリュドラド) - Requested by Ryoga. Wand camo based on the Elysion weapon with different colouring.

-- Magika Fleurir (＊マギカ・フルーリア) -- Requested by Princesse Jen, which is a rod camo. 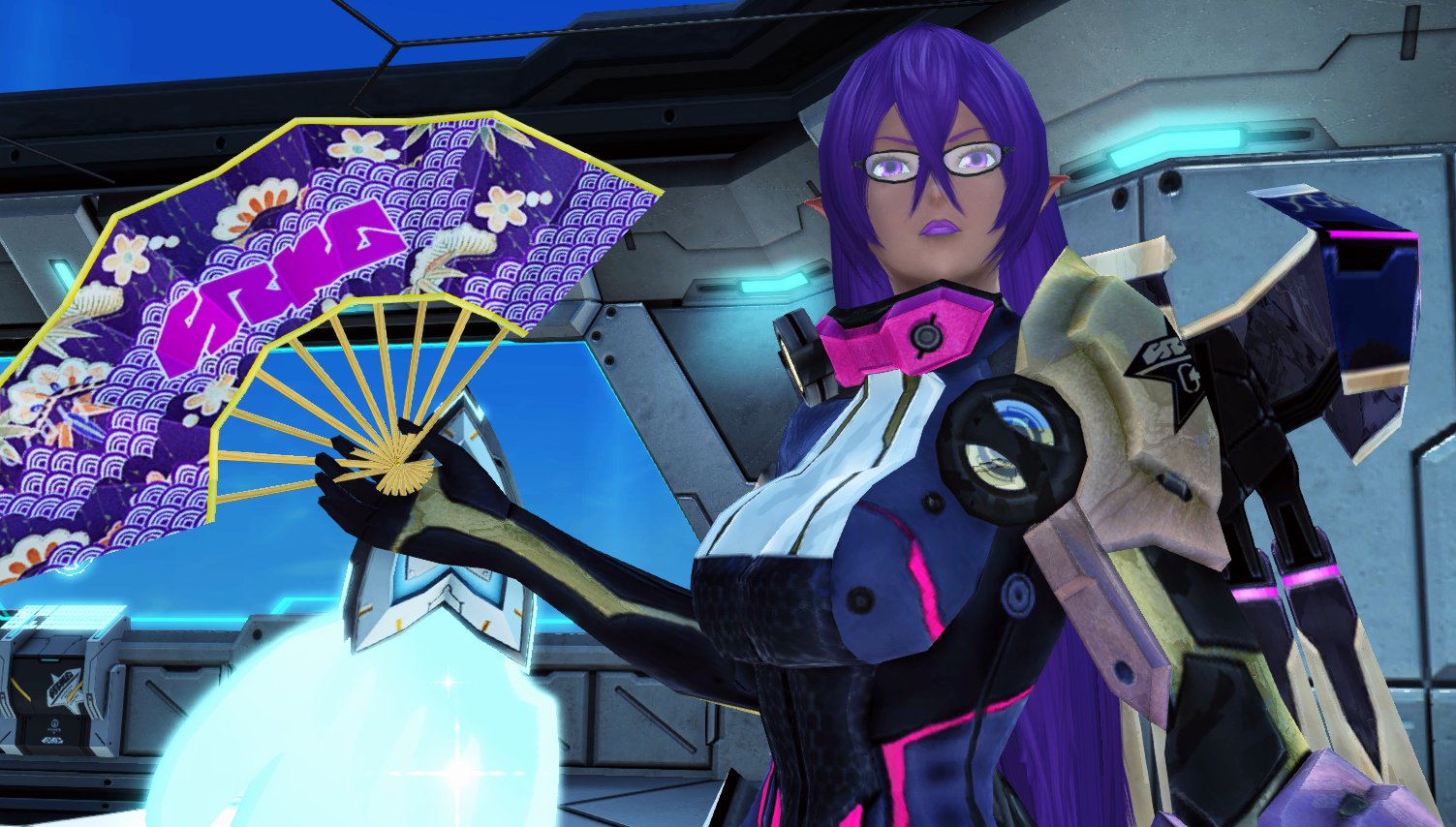 This actually doesn't exist as an OT weapon at all as far as I can tell, only a camo. It's also fairly cheap on JP. SWiki sources it as being from 週刊ファミ通 February 11th, 2016. I actually use this camo on JP myself, lol

Ah yes, I forgot about the H44 Missouri T, or Ｈ４４ミズーリＴ. Scary weapon to bring the PSO2es potential over from, especially as NT, but they look amazing as a camo for sure. Not sure to put that in NT remakes or camos.

Hoping for it to come for the Christmas Event like it originally did in JP. It's one of the only all-class harmonizers. Otherwise we'll have to wait for people to get the other one to drop from Ultra Hard or Tokyo Rainbow.

@Theuberclips The one I'm actually the most annoyed about is the basic Twin Yasminkov 2000H. I used the single in PSO and the twin in Infinity so it feels bad to break the tradition. Especially when I could be firing them full auto on Hero. Requesting Cruel Coffin (クルールコフィン) which is a 9 star gunblade.

While we're at it, put in its cousin, Cruel Flouga (クルエルフローガ), which is a 9 star twin dagger.

To my surprise, Shot Rounder was added as a camo to the photon booster shop! That was unexpected to say the least.

A lot of new camos hit global, including some new ones in the mission badge shop as well.

Honestly I'd suggest rather than just asking for the 2 of the Cruel weapons, maybe ask for all 4 variants in a camo say like * Cruel Laviene, since both the Rouge & Azure were originally upgraded versions of the Cruel series: Cruel Flouga (クルエルフローガ), Cruel Coffin (クルールコフィン), Vifroze (ヴァイフロース), & Cornelia (コルネリア).

As for the Duel Gaze there is a Camo variant that already exists in the files ＊Duel Gaze TCG (＊デュエルゲイズＴＣＧ) it was part of the JP TCG memory exchange. I don't see why they couldn't rename it Duel Gaze or whatever naming scheme & release.

On the point of the Yasminkov 8000C, it was distributed outside of PSO2es as part of the anniversary event in JP through a limited exchange. That aside, the Sigma Series & Occuld Series were PSO2es exclusive series as well as the Bardiche, Arks Fran, Yasminokov 7000V, H10 Missouri Twin, Gravilios, Caduceus, Yasha, & Rikauteri (NT variants), yet they all found their way into Global nonetheless.

And lastly I'll put in a request I'd like to see a camo of Hyakka Ryouran (ヒャッカリョウラン) & Tenimusou (テンイムソウ) I'd prefer if it cannot be colored so it can have its signature red & blue blades in its full glory.

@Church10129 Hyakka Ryouran actually has an existing NT version. No such luck for Tenimusou though.

@AiC-L I'm well aware of the NT variant, however that's why I specified the camo not to be color changeable. Since the NT variant blades can change color. Well both blades change to be the same color, in the exact way the ＊Reppuu Jinrai (＊レップウジンライ) has same color blades (though said camo can't change color)

@Church10129 It's not dual color? Isn't that missing the whole point?

Requesting Storm Shade OT to NT conversion. Rod looking like a beach umbrella that has built in ANTI. Essential for when non-technique users run out of Sol Atomizers.

Thread updated! Sorry I've been grinding a bit hard lately so I might be slow to update things right now.

I was going to add the OT Yamato weapons to this list as someone in my alliance wants the Valkyrie R25 non-silenced version, but it turns out we will be getting them in Divide Quest unless the camo is excluded from the drop table. (I'd spoiler this but Divide has been mentioned on Arks Hour and is viewable in the crafts already, as well as the point rewards, so yeah)

I'd like to put in another request, the Steam Series as a 17-type weapon camo. Similar to the * Bio Cellular & * Live Cellular