12 star weapons should be able to be turned into Excubes. (completed)

EDIT: As of Episode 6 this is now in.

This is already a thing on JP (1 excube for a 12* weapon) so I'm kind of surprised Global doesn't have this yet. I suspect it will happen in Episode 6 on December 9th, but in case it's not, I'm posting this anyways.

Due to Sigma being in the drop pools, our cube supplies on Global have suffered a bit. In place of Deo 10* weapons, sometimes Sigma weapons are dropping instead. This makes certain content really frustrating to run and generally applies to almost everything (there ARE exceptions such as Dark Falz Persona, which rarely drops 12* weapons)

Endless Quests are by FAR the worst in regards to this issue. Due to the ridiculous amount of Sigmas you get per run, it prevents 10* weapons from ever dropping if you get far enough. Getting 1 lap on XH Endless Recollection, you walk out with 0 cubes unless you're cubing the 13* weapons. As an example, I just finished a Recollection run that hit 23m, and the weapons that dropped were nothing but 12* weapons and a single 13* weapon. This is extremely discouraging, especially with one of the most obnoxious yet powerful multi-step affixes coming from this quest -- something that you'd use plenty of cubes on making. Run length doesn't help either, although obviously there's better ways to farm cubes over a long period of time -- I'd just at least like to get some cubes from a run of endless.

Profound Darkness (Barren Blossom) is another example, although far less extreme. Global gets around 10 Sigmas a run, using 250 RDR 100 Tri-Boost, daily bonus, premium + premium drink. I get around 30ish cubes a run, whereas on JP I get around 40 not counting 12* weapons.

While I wonder if this was a conscious decision early on to make sure people wouldn't just cube 12* which would have potentially caused less gold weapon mats for Atlas EX upgrades and 15* weapon series changing to be in the market, Episode 6 makes the materials from a 12* weapon feel like nothing, since 13* weapons desynth for 4 times the amount of a 12* weapon -- and over 6 times as much on Great Success rolls. And as far as I can tell, Silver weapon materials will never have a use in crafting other than to be turned into Gold at this point on Global. And realizing how many more cubes I would have at this point if we could cube 12* weapons... 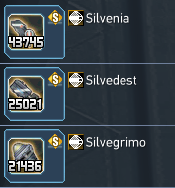 Ouch. That's at least 1000 12* weapons worth of silver. This doesn't even account for the 10k total gold mats that I have either, which a fair bit of are from converted silver materials in the craft shop...

On top, Gold mats can't be traded up into Plam mats, so having absolutely insane amounts of silver/gold isn't relevant for a lot of the upgrades in the future outside of series changing for a specific S-Grade Augment or something.

There's also the Lambda Grinder exchange, but given how much content dropped them in episode 5... even as a Summoner main who has compressed lots of parfaits, I'm still swimming in thousands. The fact that it's 3 weapons for a Lambda Grinder doesn't help, either.

Basically, it'd be extremely helpful if 12* weapons could be cubed to help deal with the fact that Sigmas are in the drop tables, causing Global to get less cubes from content. And if JP already has it, I don't see why Global shouldn't at this point, or at least in Episode 6.

This, I second this. I have gotten so many 12* I dont need but couldnt be turned into excubes it bothers me to no end.