This topic has been deleted. Only users with topic management privileges can see it.
last edited by VirtuesHope
V
VirtuesHope

I've been having issues recently with PSO2.exe not responding. There's not really a pattern that I could identify. It usually happens seconds after loading into the game. Otherwise It happens during loading screen transitions. It's also happened alot right when a UQ Boss dies and the screen goes "blank" just before the "Team Pose."

The screen will freeze, but the BGM music keeps playing. I have to Alt + Tab and terminate the process via the Task Manager. This happens frequently, but it's a fairly recent issue. It didn't use to be like this.

I've uninstalled the game completly, and deleted the PSO2 files from Documents too. I performed a fresh installation. I also updated my GPU drivers. I monitored my system resources: My CPU never goes past 30-40% usage, neither does my GPU. I have plenty of RAM to spare as well. I'm tried almost every combination of graphic settings, and compatibility changes I could think of. I'm not sure what to do anymore.

Have you told Windows to use the NVIDIA GPUs for PSO2? 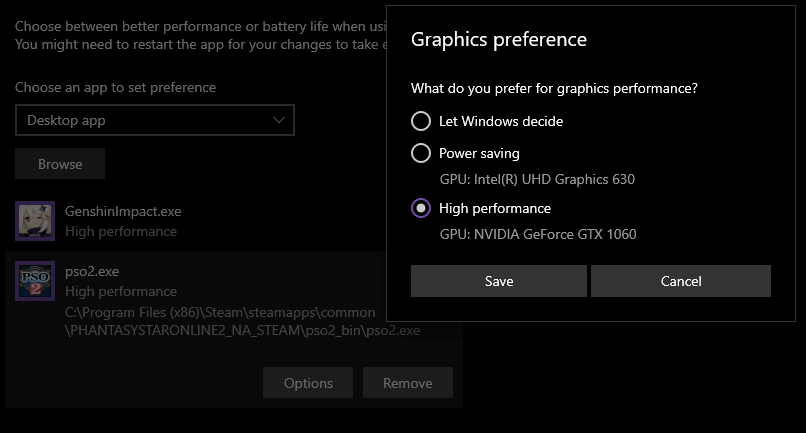 Like Genshin, Windows 10 defaults to Intel, usually, for the GPU on PSO2.

I built the computer myself a long time ago, without a built in GPU. The only available selections for both Power Saving and High Performance is my Titan X. I just checked to make sure. Albeit the game wasn't listed there, I added it and set it to "high performance"

We'll see if that makes a difference. Cross your fingers

EDIT: Nope, game froze within 10 seconds of loading in the lobby.

Are you trying to play the game at a higher resolution than 1080p? Do you have it set to render more than 50 characters? Have you set player effects to nearby only?

Do you have any overlays running on PSO2 other than steam? (IE: Don't use discord or nvidia/AMD.)

I'm truly puzzled because I have a single NVIDIA 1060, half as much RAM and don't have this problem. But I also only have one internal drive, and it's an NVme SSD. (Never install an MMO on a drive that isn't your OS Drive.)

It's a fairly recent issue. I played 6 hours straight after Maintenance last Wednesday without any problems. Ever since, I've been having problems though. (I have almost 500 hours in the game. 200 on steam, and 300 on PSO2 Tweaker/Windows Store) I haven't played the Windows Store/Tweaker versions since it released to steam.

My graphic settings are set to the highest possible. Considering my PC setup, I have enough power to process/render the game.

Running on a 2k monitor/resolution. Max characters and everything. (I didn't try changing these settings. I'm sure the game can work fine with lowered settings, but why now? It was fine until now, nothing changed. I've run the game on maximum settings since day 1.)

I don't want to ruin my experience by lowering the graphic settings, just because the game is taking a poop.

I set the PSO2.exe process priority to "high"

So far the game hasn't frozen. In fact it seems more responsive. I can open & close windows faster. Interactions seem more responsive. (Although that might be because I just uncapped my FPS and the game appears smoother as a result. It could be unrelated.)

Although i've tried uncapping the FPS before, and the game still froze. So far it seems "fixed" by changing process priority. I might try overclocking the PC too.

I'll come back and edit this post if the issue persists. For now, I'll assume it's resolved.

@VirtuesHope just as a precaution run your antivirus program

Uncapping FPS can actually cause most GPUs to overheat quicker on some games. (Especially FFXIV.) Since certain games will just unload everything into the GPU at once regardless if it actually needs to use that much GPU or not.

UPDATE: It's still happening, with or without changing the process priority. I'm out of ideas. Maybe it's time for a break. I might go back to the PSO2 Tweaker.

I don't think it's an overheating problem, because I booted up my PC for the first time in 12 hours. First thing I do is go into PSO2 via Steam. Then PSO2.exe stops responding within 30 seconds.

PS: I use my gaming PC for games only. I don't use it to browse the web, social media, or any media. I'm even browsing this forum using a different computer. The risk of getting a virus is little to none. However, I did a secure scan with different programs. There were no anomalies as expected.

@TURION-MOONSTAR I re-installed the game completely. Unless there's registry entries I don't know about.

The weird thing is.. Sometimes I'll restart the game after freezing and it'll run smoothly for hours on end. Very strange.

I made sure PSO2 is allowed through windows firewall. All outgoing/incoming traffic is allowed. I thought maybe allowing GameGuard through the firewall might help, but there's no .exe for it.

PS: I use my gaming PC for games only. I don't use it to browse the web, social media, or any media. I'm even browsing this forum using a different computer. The risk of getting a virus is little to none. However, I did a secure scan with different programs. There were no anomalies as expected.

that doesn't protect your machine at all from virus or malwares, if your machine is connected to the internet it can be infected by any kind of files that includes games from Steam.

well from the problem you have considering the hardware it could be being caused from software issues, you should send a ticket just in case it can be that the game has compatibility issues with your hardware I am also having crashes since last weeks update. last night it still fine running this game,but when i turn off pc and open it in morning already crashes. i just check file,re download exe,turn off gpu,but still crashes in loading lobby!

my friends also crashes too since a few week update.

maybe got some eror in windows cuz only pc this problem?