Why are y'all surprised you got banned?

This topic has been deleted. Only users with topic management privileges can see it.
last edited by
D
DarkstalkerX99

@DarkstalkerX99 I really do apologise, I cant figure a way to get to the point without rambling off every detail while construction a informative argument.

I didn't read through all of these posts, but I am still curious how Sega figures out who purchased meseta from these sites. I doubt the sites are offering up a list of customers so it must be based on players selling red meat for 10 mil meseta and the sites purchasing it. Sega has your data transactions, so pretending "I didn't know selling red meat for 10 mil was bad" isn't really a good cop-out. Word of wisdom for anyone selling something for 100X its going price. If someone buys it, you could get banned. Be smart.

@SilverRathalos You can just take small breaks and use your space bar for posts, it only takes a few seconds.

At least they aren't doing like Nexon that sold loot boxes till the day they unhid the forum post announcing maplestory 2 closure which showed, according to its date, that was already planned at least 2-3 months earlier.

@condor They did that? Shit lol It's a shame it went down since I really liked MS2 (before they cracked down on everyone's fun and literally all my friends left

) but with practices like that, it's no wonder it tanked. I guess they were on the fence about whether they were going to or not.

@ApollosAmour Yeah, I still had a copy of the image that was shared back then (posted on Feb 27, unhid on March 18 when they announced the closure), with the CM saying elsewhere that he "already knew of the closure" and "was hard for him to keep it for himself".

After the obvious ****storm, they offered refunds in nexon coins only (

) to push players to move on another nexon game, with maplestory as first candidate (as with refunds they offered some "rewards" to those moving to maplestory).

Honestly, it went down for the problems the game had (several layers of RNG for eg.), that was just the icing on the cake with Nexon being Nexon

Most of my friends left right after chaos raid was introduced to the game. 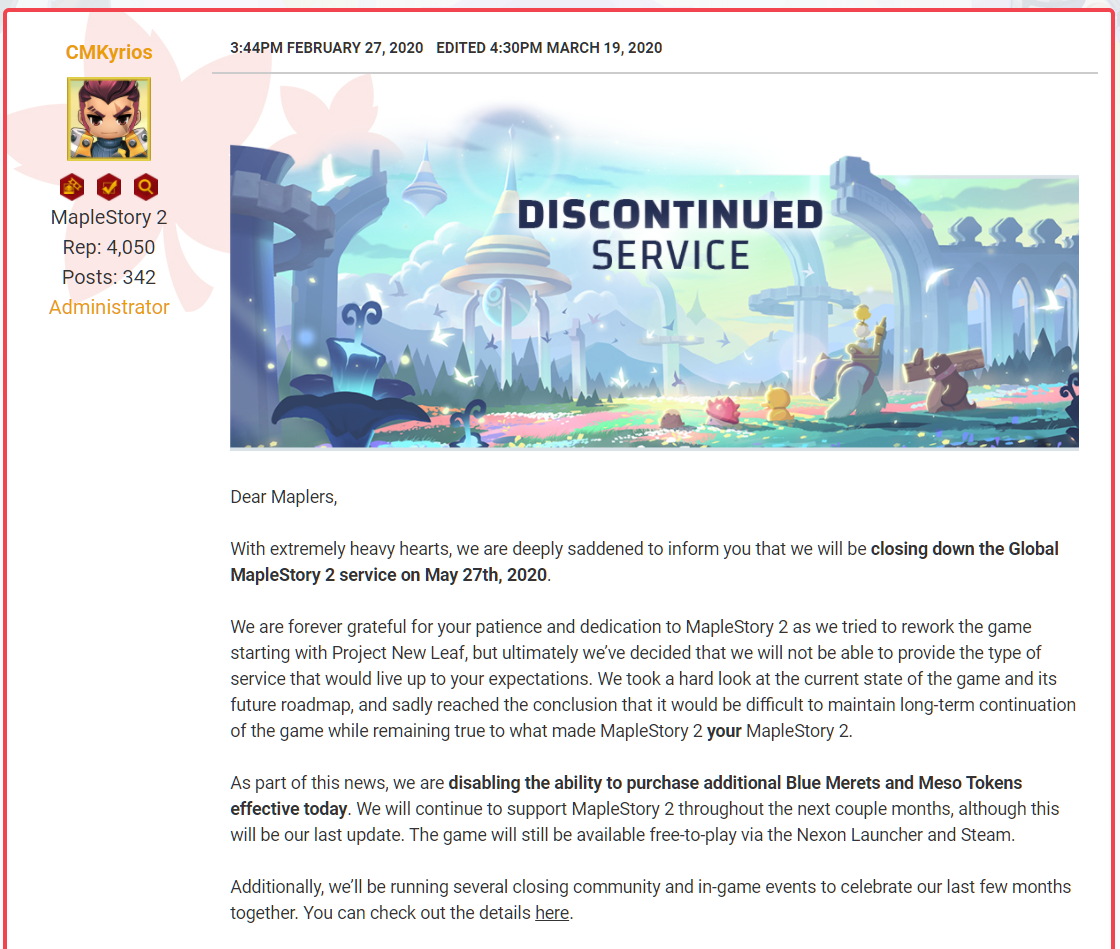 That’s no surprise, every game I’ve ever loved has been poorly handled by Nexon and is either dead or on life support now.

@Milk I think that Nexon is one of the worst companies around, they are basically doing the same thing with Spiriwish.

Sega has had some hiccups with lack of communication and leniency with anything else than RMT, but it's way better than many.

@Scerms77 said in Why are y'all surprised you got banned?:

Hello, just chiming in. I saw some people here talking about players getting banned for purchasing items from bot sellers in the player shop. Is that somehow confirmed (Link please) or is that just some guessing or hear-say? I mean, most players dont read this forum and dont have a clue that they shouldnt buy from playershops where the owner has just a PN... Most people just buy whats the cheapest and dont ask whats going on"behind the scenes" It would be very rude to ban these players who simply used a ingame function... If that truly is the case, its on Sega to take out these shops (and i mean on a daily basis, not only during maintainance once every two weeks or monthly) so players cant be "trapped" to buy from these shops.

For now, this is all hearsay. Sega hasn't really been forthcoming about why the mass bans (other than what's shown on the monthly ban posts).

@SilverRathalos @Shine I'm not so sure Sega is trying to ignore this issue or the players... I mean, Sega doesn't seem to be that incompetent.

But as someone else pointed out, it's Billions... maybe less, Millions(?) of accounts over 6 Months on three platforms. Even if a player did only one personal shop transaction a day, that's... a huge number to sift through! Plus, they can't use the same filter they used to catch the actual RMT hackers...

On top of actually running the game, they probably need someone to go through all the gameplay, personal shop and economy records to review for innocent players who got caught along with actual confessed RMT hackers. My point is, even is Sega did announce that they are reviewing everyone's case, I don't see how any of this is going to be fixed soon.

@WHlTE-KNIGHT Maybe the mass ban was their way of catching dupers and hackers.

The situation with dupers/rmt/bots are things that takes time to go away or alleviate, especially when you’re dealing with millions of account and decent portion being bots or duping. They only have player report, and account logs to go off of.

These issue can’t be done with a snap of a finger or cleared in a day’s time. Besides, the recent ban wave with 33k accounts sweeped does show they’re getting on top of things but maybe just not to your standards.

And scratches is irrelevant with the staff dealing with the reporrts/banning decisions. As if not releasing new scratch/fresh finds stop people from using the dupes with the current ac items.