This topic has been deleted. Only users with topic management privileges can see it.
last edited by
D
Dark Knight1107

Have they said how long the open beta is? I'm not sure if I missed or if I'm just blind. 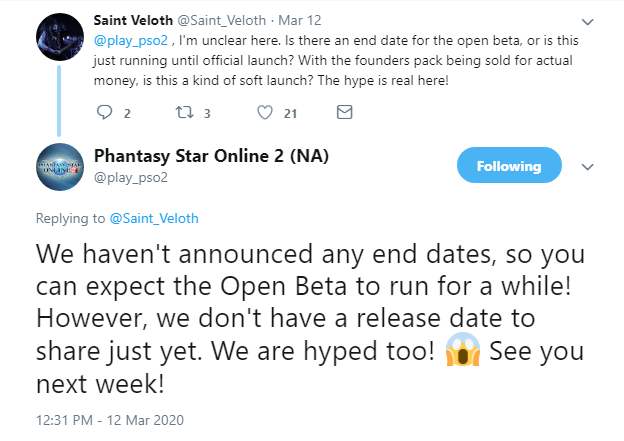 It's been hinted that it will run for longer than a week at least.

If they start taking money then I can't see it having an end. Should go from open to release smoothly

@PhantasyStar369 Should go smoothly. Then the PC should be releases soon afterwards.

People have been guessing a soft launch i.e. open beta runs up until launch date so as others have said, "we see."

I feel I'm seeing the familiar behavior of JP game companies hurling everything into the end of March, the end of fiscal year

I would think open beta will run until game is released(maybe shut down a day or so for release, or if some major issues pop up with the game or with PC babies complaining.

Should just do it like fortnite that was considered an open beta(or something like that). An maybe still is, lol.

The service should remain available until 30 days after the last available purchase of "premium".

Would be hard to imagine they would sell a service that wouldn't be available for the majority of the purchased time.

I feel like questions like this show the relatively older nature of the player base. Open betas being soft launches has been the norm for a while now. There's no reason to assume otherwise and, like others have already pointed out, there's plenty of evidence that the most likely scenario (i.e. open beta basically being release) is in fact the case too.

Personal experience from playing many online and MMO games during their Open Beta. Most cases usually the Open Beta ends when the official "Launch" starts. At which point when it comes to free to play titles they push more out in regards to cash shop purchases.