I started with PSO v1 on Dreamcast, but unfortunately - either due to region locks or an returned game having the code redeemed (or maybe even a shop staff member lifting the Hunter License code) - I was unable to play online. I managed to reach Dark Falz on normal before returning it pretty frustrated.

Eventually, I played on PC Ver 2 and loved every minute of it, made a lot of friends and got my character to Lv 200. This is a shot of some local friends and I preparing to take on Vol Opt. 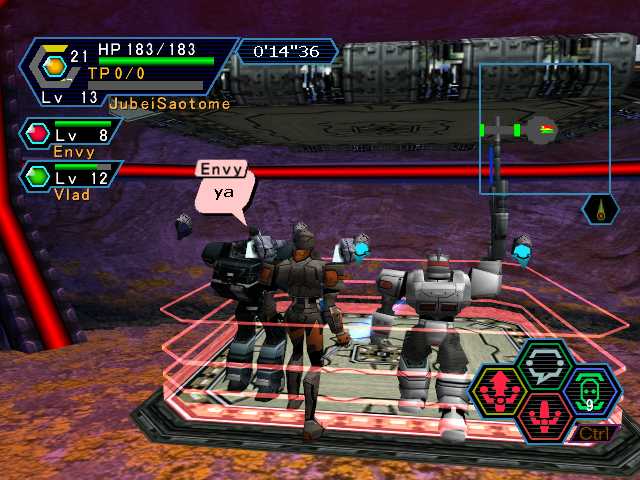 Australia didn't get PSO Episode 1 & 2 on GameCube or Xbox (or at least it was very hard to find), so I imported the US version and played it offline to Lv. 200 again. The Climate Control Area and Towers remain some of my favourite places in PSO Ep 2! 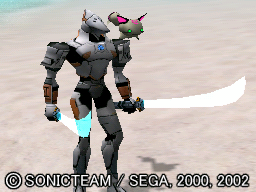 During this time period I made some friends locally who had played PSO on Dreamcast since launch, we ended up all playing Blue Burst together. I started out by participating in the Japanese Beta and eventually moved on to the US servers. This shot was taken after multiple 'Towards the Future' runs! I played a HUmar in the early hours of Ver 2, but eventually settled on being a Cast from that moment forward. 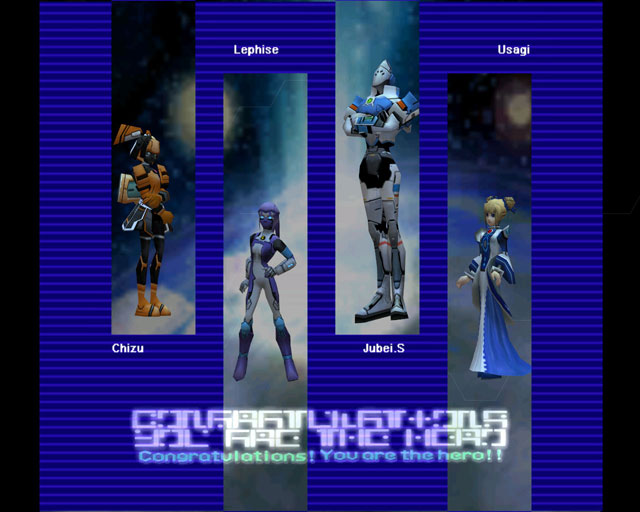 Fast forward a few more years and PS Universe is announced, I quickly joined the PSUPedia community, making a whole bunch of friends on IRC and started my grind again. This time I was one of the Human faced casts focusing on the Hunter path again. I capped out at around lv 80 with Ambition of the Illuminus, but this is a shot from the first level cap of 50. 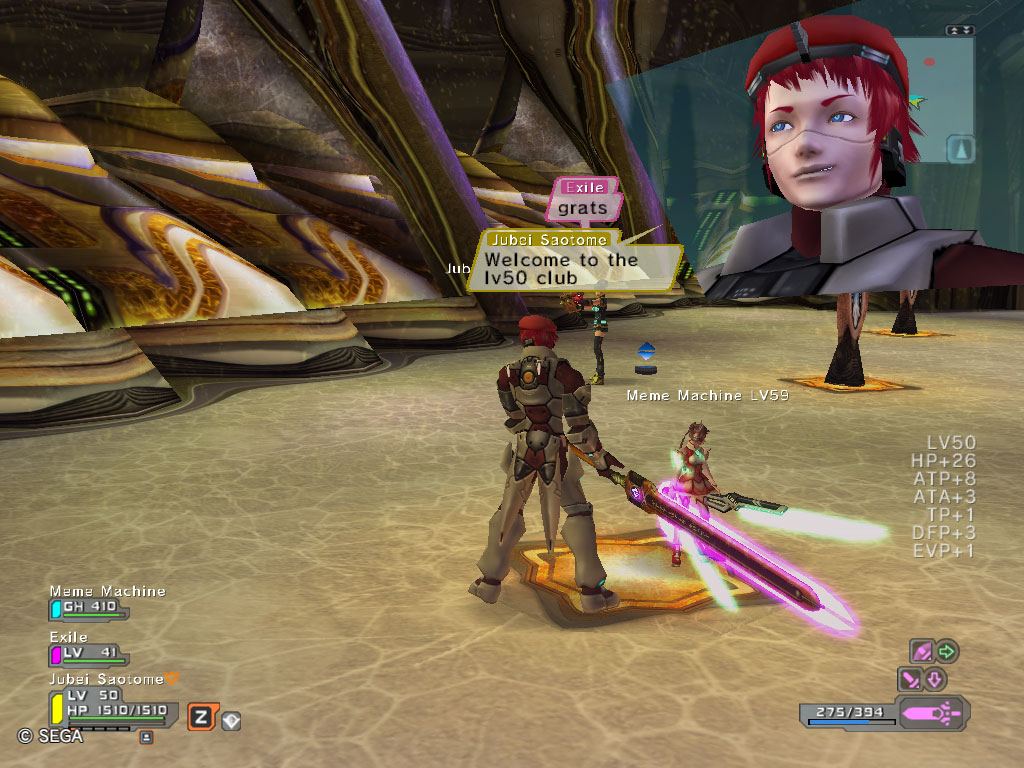 I dabbled in the PSP games too, PSP2 being my favourite as PSP2i never got localised properly. I actually started playing it again recently as a game for travel and it's been super nostalgic to return to it. Pictured is the first PSP game with Vivienne, who you might come across in emergency codes in PSO2! 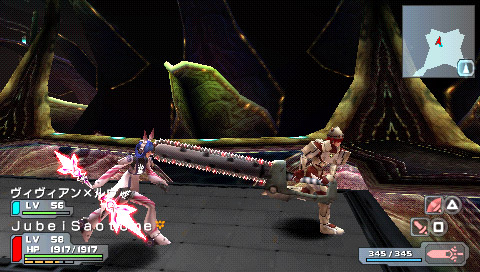 Fast forward to now, where I've been playing the Japanese version with Neo, who I befriended properly during the PSO2 Closed Beta for NA. We've been making an Alliance together with a focus of helping out new players! 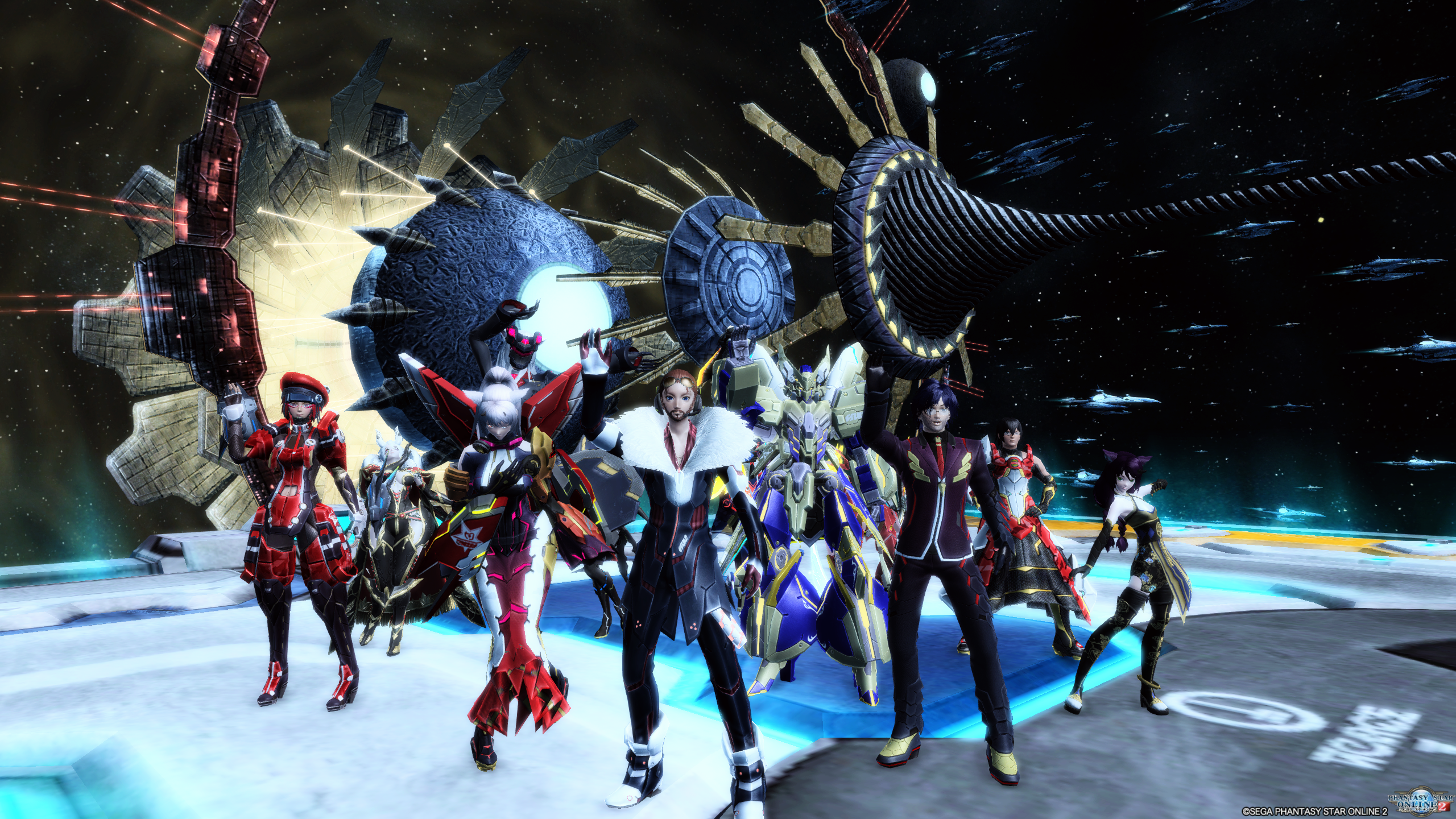 So, there's my history over the past 20 years of online PSO games. What's your story?

This is an interesting topic. I promise to make an effort to this later. I just think that the history and time line of my time with PSO in general, deserves much more effort from myself before I do it justice in one post!

The Dreamcast and GameCube versions have a special place in my heart.

Met some of my best friends on there over each successive release. Dreamcast and GameCube versions have a special place in my heart.

Same here, it's not the same going back to PSO these days. I'm happy with the memories I have, but damn if I wish I could go back to the early 2000s to relive them.

I didn't get to grow up with the franchise, I was literally born when the first game released. Around 2006 I got into the Sonic series however after I got a Gameboy Advance and that horrible GBA port of the first Sonic game as a birthday present. As expected, the port was terrible but young me couldn't have known and I got curious into more of SEGA's stuff.

Around the early 2012 I begun getting into RPGs and I learning that one of Sonic's creators, Yuji Naka, worked on an RPG called Phantasy Star I gave it a try. Still new RPG games though, much less 80s and 90s RPGs with how grindy they can be, I didn't get far but I liked the Sci Fi aesthetic! Around the same time I had begun learning about MMOs and was surprised to learn that a "Phantasy Star Online" even existed! However to my knowledge at the time, the game was:

Ahh well (silly young me had no idea bout Private Servers ^^;). Regardless a year later (2013), extra curiosity on the franchise lead me to a mention of a "Phantasy Star Online 2". Needless to say I liked what I saw and I remember looking through what little official English information was available of the game on SEGA's old Blog site and the original PSO2 site... yes you know the one:

Little did I know at the time the game had been delayed and well... as I hadn't been keeping up with the franchise as extensively to begin with I just kinda forgot it existed and I didn't interact with the franchise from there on out... until eventually:

Basically a year later I got curious for more RPGs for my PSP (which I still owned at the time) and came across Phantasy Star Portable and Portable 2. I got Phantasy Star Portable 2 yet... another year later and I definitely had good some good times with! Though I also didn't get far at the time... (I remember getting stuck on the boss against Yut). I had also heard that PSO2 was finally localized... sorta, ya see... I was living in South East Asia at the time so I was aware of the AsiaSoft version though I didn't try it out at the time. Through Phantasy Star Portable 2 I also learned of Phantasy Star Universe, though this was years after the servers shut down. I had also given the first PSO1 a go through Dreamcast emulation... which didn't last long (combine lack of understanding on some mechanics with just how glitchy DC emulation was on my PC to the point that half the time the floor was invisible... ).

Eventually I gave PSO a proper go in 2016 through Blue Burst's private servers and eventually gave PSo2 a go... through its SEA version which I promptly uninstalled within a few minutes of making my own character and playing I uninstalled and went through the process of downloading the JP version. Needless to say, PSOBB's private servers and PSO2 were my first time playing a major online game as intended as I did my best to socialize with other players and I did in fact revisit PSOBB during a particular rough time where I had no friends to talk to while I awaited to start University and I did get to make some life-long friends I still talk to as of today. It also helped me be less anxious when talking to other people online and before you know it, it wasn't just PSO1, but also talking through Discord, posting on Forums, trying out other Online games.

I also got to try out Phantasy Star Universe's Network Mode once the Clementine servers went back up the following years! It ended up replacing PSO1 as my goto game due to some PSO Drama on the Blue Burst server I played on at the time.

That said, I do still play PSO1 (Offline... for now) on Dreamcast after I acquired one during a trip to Tokyo and a copy of the game not long after.

And so here we are now... years of playing the JP version and gotten pretty far, I was certainly overjoyed when the NA version got announced at E3! My excitement was certainly weird since as I said, I played the JP version already but I suppose it has something to do with being able to play on an official version and being able to interact with players without having to worry about potential language barriers that might be present. There's also a sense of legitimacy... the JP version was alright but it was always hard to get what few real life friends I had to give the game a go due to its JP-exclusiveness...

Wew... that's a long history on my end alright. Will definitely be interested in hearing if else has as complex a history with the franchise as I do! xD

I played that fight against Yut on PSP2 recently, he's a beast!

I managed to beat him eventually, I should probs give Portable 2 another shot! Apparently you can still play with other players Ad-Hoc but my PSP is one of cheaper model that doesn't have Online functionalities.

Started with Phantasy Star 2 on Genesis, Played 3 and 4 as well. So when PSO came out for dreamcast I bought the system just to play the game. Purchased ver. 2 as well. Later got EP 1&2 on Gamecube when it came out. Next came PSU on PS2 later I moved to 360 for better hardware and more friends to play with on that platform. By the time I'd gotten around to buying a PSP they were already on Portable 2 so I purchased that and played it. When PSO2 came out I waited a little bit to see if a global or western release was planned. When it became apparent it wasn't I made an account and played it on PC on the JP servers. While I would like to bring my characters from there to here I don't mind starting fresh as I have friends to play it with over here that refused to play the JP version for various reasons.

I started on pso 1 on the gamecube (offline), i was young and never got to buy it,i regret that as I love the game,then Universe I think my cd got stolen or sit on(i swear to never pass cd again),i got the psp Phantasy Star Portable but i didn't like playing on a handheld. Then found new pso 2 ,i waited for ages but it never came to na. Its only cause i did a search to see if a "pso/psu" might happened that i learn about pso2 coming thank to Microsoft.

I love hearing these stories of PSO and PSU. It shows how many different directions people found the game through.

The only Phantasy Star game that I played a lot of was Phantasy Star Portable, part of the Phantasy Star Universe-styled games, on the PSP. That was before I got into FFXIV, prior to 2013, and before I moved into my own place in 2010-2011

I started Phantasy Star with the original RPG on the Sega Master Drive and have played every installment of the franchise since. My Wife (who hates video games) became addicted to PSO on the Dreamcast which caused us to purchase a 2nd console and copy of the game so we could play together. Due to the closed Beta she's already addicted to the upcoming Xbox One version, so we'll probably end up buying two copies of the game so we don't have to be concerned with who's playing on who's home console (we already have 3 Xbox One consoles). I guess I'll pick up the Founders & Ragol Editions. Unfortunately I'll be working when the open Beta begins.

@AnamanaAU I remember you from BB <: