Ship 2: PAIR Postive Alien Interspecies Relationships/Like talking about the aliens of PSO2 (Rappys, Dinians, Lillipans, etc.), dressing up as them, or even RP? Then this (very)beginner Alliance is for you!

I have to start off with a huge warning first: I am completely new to this game and this is my first time running an Alliance or any sort of Online Guild ever. Not to mention that I'm not going to be 100% serious about making this Alliance the greatest one ever. This Alliance is more like a chilled out group for players that want to talk about the aliens, like to dress up as them, or even RP. You can even use this Alliance as a temporary place to stay in until you find a better Alliance that suits your playstyle or needs. Anyone can come and go as they please, no need to feel obligated to stay here. Also since the game is not really out yet, I may bump this thread a few months later to promote the group along with maybe a couple new rules that I might've come up with between now and later.

The only rule I have is not to be a creep nor harass people nor even annoy others outside of the Alliance (like declaring Rappys are the best aliens creatures ever to everyone you meet).

Anyway let me describe this particular Alliance in a bit more detail now that I got the essentials out of the way.

This Alliance is basically just a club or an Inn in a way for people who are fans of the aliens or costumes you can dress up as in the game since there is no alien race that is playable that doesn't look too different from humans. That is to say that I'm not saying that CASTs, newmans, and deumans are not welcome, we're all players at the end of the day, I'm just making a place within the game for everyone to talk about the aliens you meet in the game's story like Dinians (the dragon-like race) and Lillipans (the rabbit-like race) and even Rappys.

Ever since that I found this costume list here: http://srpgp.supersanctuary.net/cirnopedia-test/costumes_7.php#nav and found out that there is a Dinian costume (which is probably super rare by the way) that exists like here: http://bumped.org/psublog/wp-content/uploads/2017/03/Arks-Sadinian-Suit-img.jpg 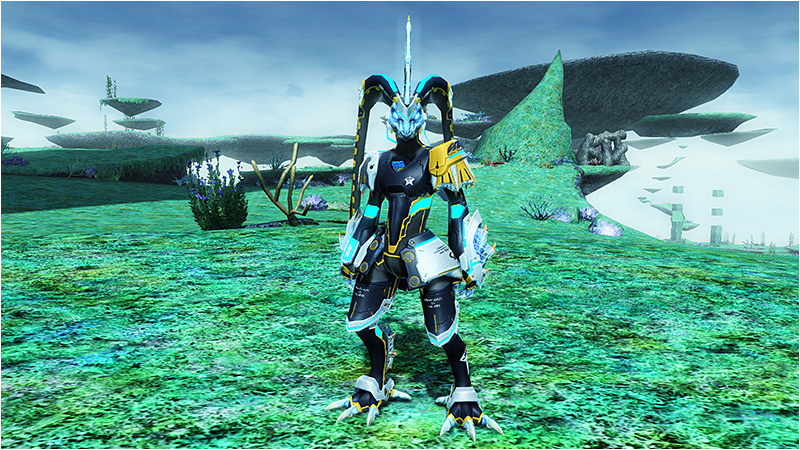 I wanted to make a place or a short stop for people who'll get these costumes and probably want to talk about them at length or just roleplay as their species costume. But I also wanted meet and team up with people like this even though I doubt I'll wear one myself and speaking of myself...

I guess I'll explain a bit on how I'll run the Alliance... I have no idea other than try to complete the objectives around the Alliance and taking a lax pace to making it bigger. I'm sure this will change much further down line months later when I bump this, but for the moment when the game just comes back, I'll just do most of the usual things to help make the Alliance better, especially after I look up guides on how to do it, but I will very much appreciate your help even if you want to be in there temporarily.

As for how I will enforce the one rule I have: I'll use the three strike system before kicking you, first I'll just warn you, the second time I will come and talk to you within the game or e-mail you about what it is you've been doing wrong, and last I'll give one final chance to explain yourself and your behavior and if I like your explanation, I'll give you a task like getting someone's forgiveness or some other way to prove that you have changed your bad behavior to let you back in. However, if I don't like your reasoning, I'll kick you from the Alliance and tell you why. Other than that, just try to be nice and respectful to everyone even if that person has a weird quirk you don't like, like always referring to themselves in third person (I don't mind that), and we'll be good.

I think that's all I can think of at the moment, this Alliance is just a hangout place for everyone who likes the Aliens of this game to come and talk, debate, and roleplay (like coming up with a mini story or quest to explain why you're fighting in this particular area... heh, maybe I can make contests out of that one day) within the game itself. So like I've been saying, it'll be more or less like an Inn (one that you'll have to find and contact me first) for Alien Enthusiasts like myself. So I hope you'll take a chance and have a good time talking about the Aliens or have fun pretending to be them (even though you don't probably need an Alliance to do that), as well as have fun in an okay enough group that will be willing to help you. Have fun.