Okay so here are my current inside projects. We literally had snow this week outdoors so our outside plants are maybe a month or two from being even remotely interesting. 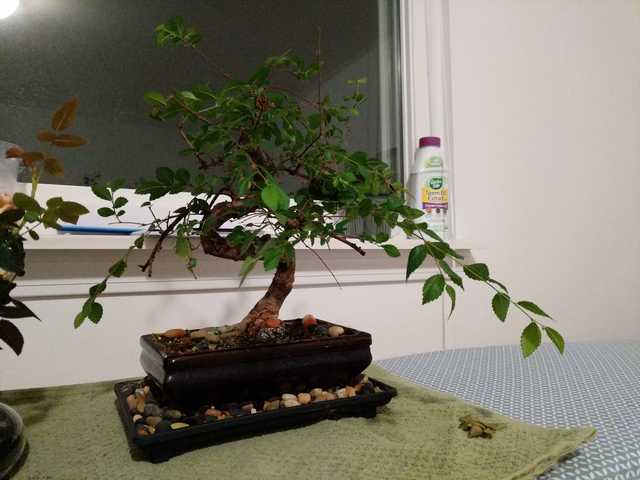 I estimate it's about 5 - 8 years old - not sure exactly although I think the seller maintained records and I might have it somewhere... Should put a label or something on it. Applied some neem oil to it at the start of the year in an attempt to kill a lot of little white mites that were living in the soil. They didn't seem too harmful but better safe than sorry. The tree ended up shedding almost all of it's leaves but it has recovered pretty nicely. And the mites are gone! RIP.

It seemed to have a similar reaction to the neem when I first got it... There were many pervasive aphids on it and those guys absolutely had to go. I think I might have treated it with a super mild dish-soap solution instead of neem, come to think of it. But it dropped all of it's leaves as well and bounced back from that as well. 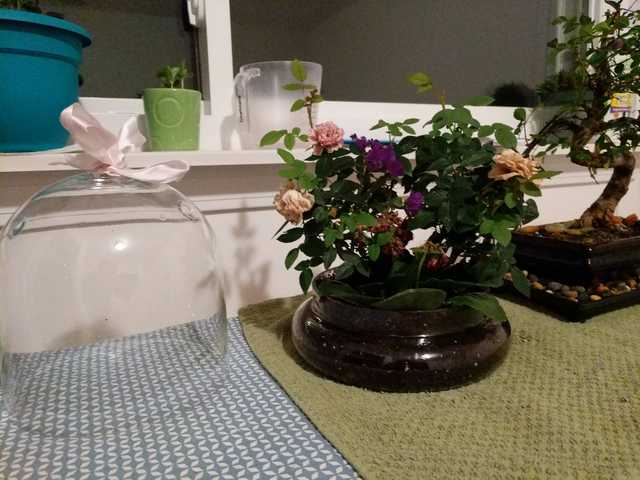 I planted these as a Valentine's Day gift this year for my better half and it has taken to its new environment pretty well. I'm worried long term about some sort of fungal issue at the bottom since the soil doesn't really have good drainage or anywhere to go, but I guess we'll cross that bridge when we get there. If anyone knows how to made it bud prolifically I'm open to tips - have never taken care of roses before but figured this would be a nice introduction to them. 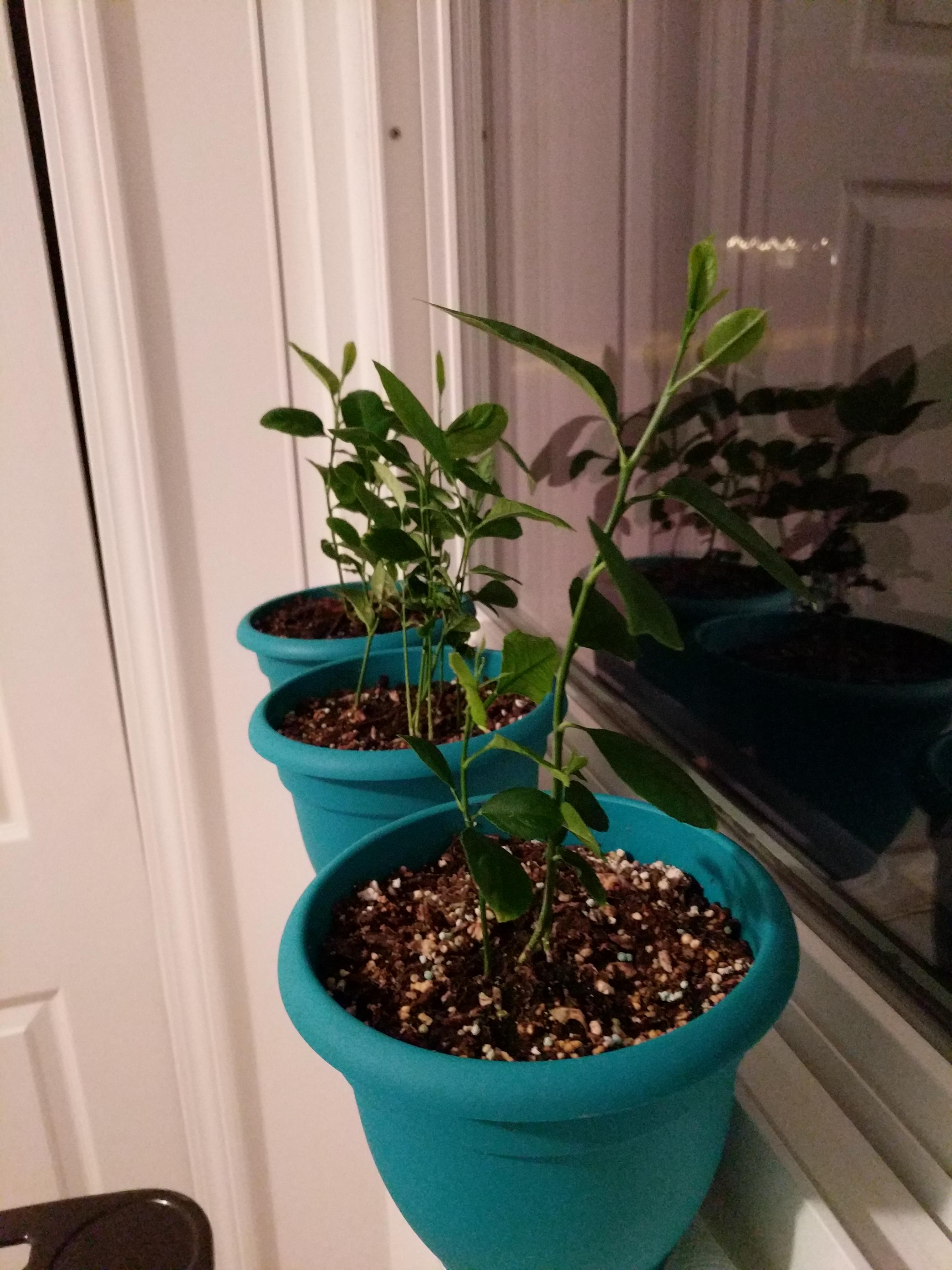 I started all of these from the detritus after making lemonade LATE last summer. Put them outside in a planter, watered semi regularly (admittedly less than I probably should have) and brought them in when it was starting to get too cold for them. Kept them in their planter for maybe 3 months to see if they would amount to anything then started to notice... guests. Since they were outside there were a LOT of millipedes, slugs, and pillbugs in the planter. Eventually I culled some of the weaker sprouts and transferred the stronger ones to these blue pots. 0 / 10 - would not -pede again.

I potted them in the blue pots and hit them with neem at the same time as I hit the bonsai, early Jan, and ended up dousing the fresh potting soil in neem as well. Worked like a charm and these have been happy as clams since. Waiting for spring time when these can go outside once again... But gotta come up with a way to protect them from deer and other vermin. 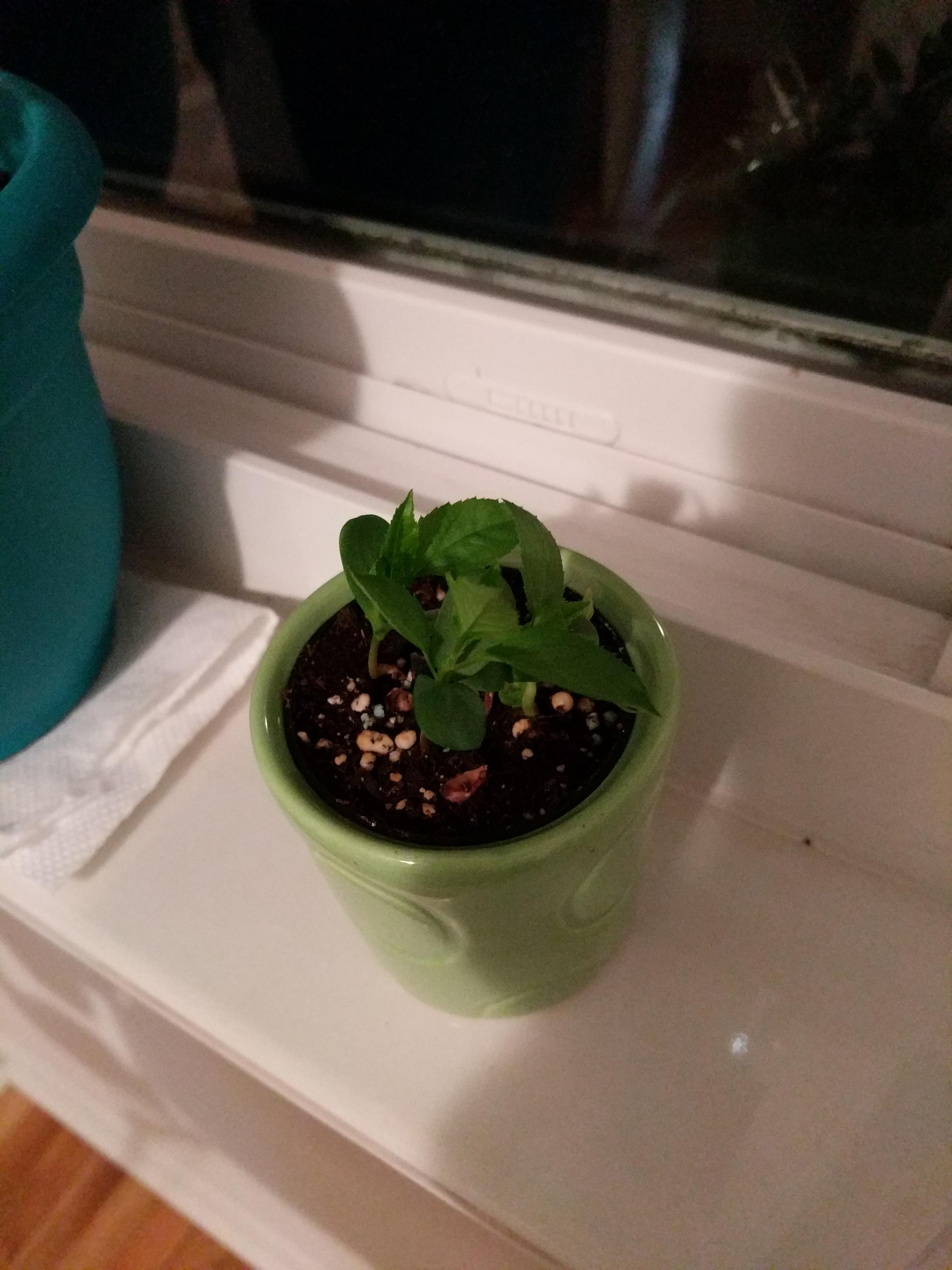 Planted these seeds... last week? Two weeks ago? Two weeks ago. Was eating an apple and cracked the core open to see that, since the apple had wintered over, the seeds had germinated. Figured I had this cute little green pot that could be a temporary home for them. I know almost nothing about fruiting trees (the lemons were a one-off experiment) but from what I understand commercial apple trees are basically frankensteins - The growers will take strong root stock of one variety of apple (which will bear a lot of fruit) and then do something called "chip budding" where they take buds from another variety (which will bear tastier fruit) and then basically make a cut in the root stock, and slice off a bit of the other variety to make the "chip," and then literally bind the chip to the cut in the root stock. Wild. I am definitely NOT doing that with these little guys, but will likely see where they get to. They'll probably die.

I'm actually working on a Meyer Lemon tree right now, but it's been having some issues with Leaf Curl disease. Pruned it all back and new growth looks really good. I actually have succulent seeds germinating on my desk right now!

@GM-Deynger color me envious - I wish we lived in a climate where my little lemon seeds could thrive. We want a Meyer lemon tree in the future dream home.

Can I get an F in the plants chat

There is one guy on youtube I like watching named SerpaDesign who makes great plant projects and posts updates on the plant's life.

I really like the terrariums that he makes and see the changes that happen where life grows inside of them.

I want to make a nice enclosed terrariums too. They look nice and fun. Want to place a couple on my desk

I'll have to look up that YouTuber, thanks.

Making a terrarium is really fun, but there's a lot to consider. Mostly it's just making sure you've got the right light levels for the plants you pick. I'd start with some succulents and go from there!

r me envious - I wish we lived in a climate where my little lemon seeds could thrive. We want a Meyer lemon tree in the future dream home. What's leaf curl disease? Sounds bad. Hope yours recovers!

Actually it does seem like it is recovering. A lot of new growth so far. And leaf curl disease affects citrus trees and is typically hard to get rid of. It features slow growth, brown splotchy leaves that wither and die before their time, and most notably, curling leaves. Since mine seems to be recovering though, I might have just been over-watering, which causes the same symptoms. ><