This topic has been deleted. Only users with topic management privileges can see it.
last edited by Despair v1
D
Despair v1

Hello! I'm Lysergic, leader of Adorable. We're a casual/social alliance, but we don't shy away from endgame content. We're currently at 88 members, with about half of that being daily active players. We do everything from ultimate quests, advanced quests, buster quests, alliance urgent quests, trigger quests, alliance events, giveaways, karaoke, to standing in the lobby all day. If we're not online in game, you can find us on Discord where we're chatting there or talking in voice chat.

Many of us are knowledgeable in terms of current content, and some of us know much more about future content, as they are former, or even current JP players. We're always happy to help you out with whatever you need, be it grinding, augmenting, answering questions, or even throwing some meseta your way to help get you going. With that being said, we're not here to hold your hand through your entire time playing, so if you're looking for an alliance to coddle you, we aren't it.

Being a casual alliance, we don't expect you to be on every day or no life the game, but we would like you to be active in some way or another. At the very least, cap your alliance points for the week, it's not hard to do.

Feel free to message me on discord @ Lysergic#0002, or you can use the invite link I've provided to join the alliance server. 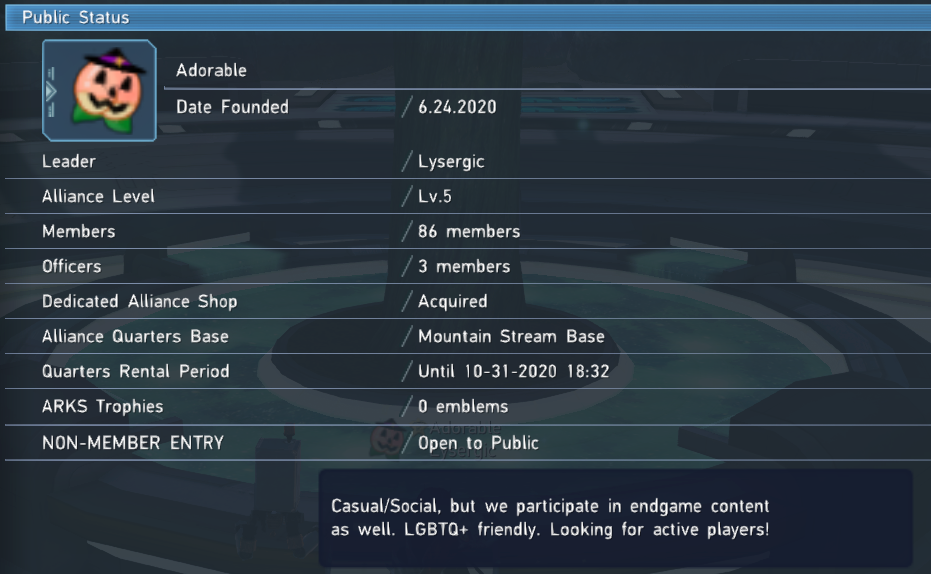 Edited information so it's up to date!

What are you waiting for? Become Adorable!