What I've taken away from episode 4 just from these forums alone. 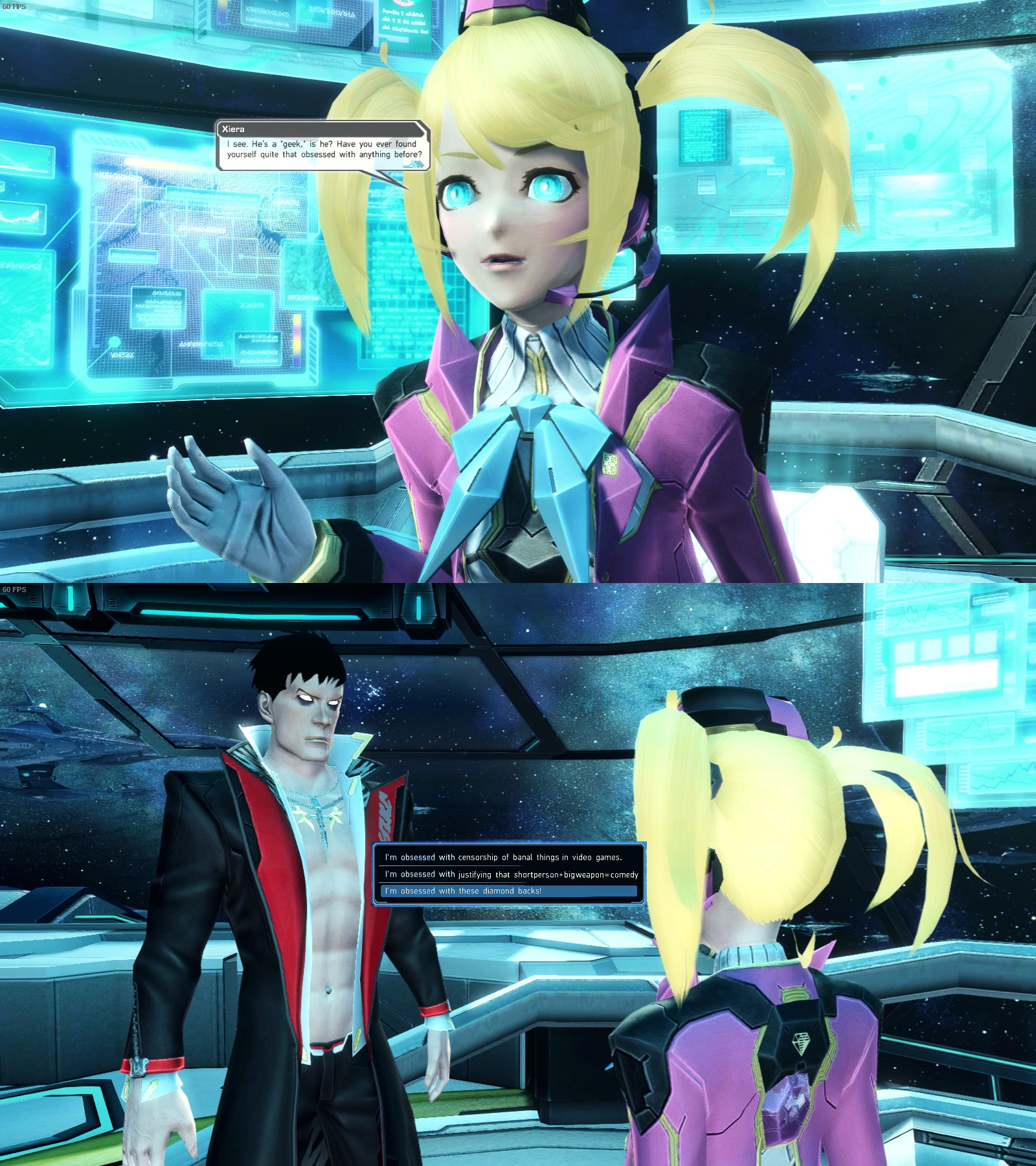 I like how the people who preach anti-censorship have the thinnest skin and not only mass report posts they don't like, but crow about how they block people to hide their opinions and views from sight. The irony is delicious.

The real irony is how backwards you and the people that keep crying about the censorship have it. No one has mass reported anything either, don't pull lies out of thin air just to push your backwards point.

I'm a troll but not the person who has been here since beta with the sole purpose of arguing in basically any thread they are in to flex some weird superiority vibe. 100% bet they are a NA JP player lul

Gamers are so oppressed
Reply Quote
last edited by zaffy2005

So, finally actually got into the EP4 story. Not sure exactly how far in I am overall, but just got to the part where Creepo McCreeperson CEO what's-his-doucheface revealed that "Mother" is exactly what we all suspected it is as soon as it was mentioned and then tried and failed to capture Al thanks to the protagonist's interference.

So, unless there's still a lot more coming into it later on, near as I can tell the OPs entire complaint is centered around the 2-3 cinematic "missions" in which Kohri freaks out about how "cute" Al looks, particularly in girly clothing.

So, let's address the ridiculousness of the OP's objection: "teenage girls creaming over a boy half their age."

Hitsugi and Kohri are, at most, 15-16 years old. Maybe only 14. It's a Japanese game, after all. Hitsugi's reactions to Al transitioned from shock/terror ("who the heck is this random person that just appeared in my dorm room") to a more familial/almost maternal sense of wanting to protect him, essentially becoming the "big sister" her cover story made her out to be. Kohri on the other hand, as mentioned, went full blown femboy fan-girl and was immediately called out on her antics by Hitsugi, thus establishing from the onset that this is not behavior ANYONE is "encouraging." Shame on Sega for shaming a character for acting shamefully? Seems rather pointless. But there IS a significant difference between essentially "OMG, so kawaii" and the OP's claim of "teenage girls creaming themselves." And not to mention the part where it's just ONE girl, not both, thus "teenage GIRLS" is entirely inaccurate.

But then comes the other half of the blunder: Al is not 7 years old. Nor 8. Nor even 10. His meek, mild-mannered, mousy personality may give the impression of him being much younger but in all likelihood he's actually the exact same age as Hitsugi (being her "avatar," after all) or, at most, a year or two younger.

Which is hardly anything to make such an enormous stink about, let alone something that carries on for 21 pages. This is just insane at this point.

@zaffy2005 What I see currently from these pages is that some on the pro censor side want to silence the threads, while those on the anti censor side respond by silencing those who tried to get the threads closed and removed. There are then those who want to silence everything because the subject bothers them. There's a lot of hate and intolerance coming from many sides. And to top it, there's the usual Internet custom of trying to have the last word and be the only beacon of "The Truth", just to feel the utter satisfaction of telling the other side "You are wrong!".

Not all posters are into this train, but it's easy to fall on it and get carried. I mean, when you get called the P word over the internet just for saying you don't mind certain digital media to be shown.... those may be easily uttered words but I bet those using them ignore the actual weight they carry. And if they do, then they are really blatantly evil. But I will give the benefit of the doubt and think they just ignore how hard it is to be called such things with no reason and no proof.

As for the episode, I did a small review of it somewhere on this thread. The short review is that the episode was far from being the best writing out there, but none of the scenes and tropes mentioned were enough for me to call fault. It's just a cringey episode that even the JP population rejected, I assume for the same reasons I did. Still, from it just being a bad episode, to calling people the P word over it? I think this is a serious case of over reacting coupled with the past beef the anti and pro censor sides have on each other.

I was also told that if you enjoyed PSO2 the Animation that you would likely enjoy episode 4.

I personally find myself greatly enjoying Episode 4's story and kind of wished we spent more time on Earth other than being on strict business.

@SleeprunnerInc How is bathing your child as a parent remotely comparable to the bath scene that got cut? On any level? lol You say people can't differentiate between fantasy and reality, but you just used it in your argument.

NO, I DONT GET IN ANY GROPING AND SWEAT NUZZLING WITH KIDS.

But the scene is just children bathing, which isn't unusual right? Aren't you the one making it sexual?

@Gamers-are-so-oppressed I really don't like you trying to now somehow push me in to the situation which is in the game.

I work with freaking 7 year olds.

NO, I DONT GET IN ANY GROPING AND SWEAT NUZZLING WITH KIDS.

Jesus christ what the hell is wrong with you?!

You work with kids and you're okay with and trying to promote the contents of the cutscenes? Yikes.

I previously did extensive volunteer work, back in highschool, at a center for kids with low functioning autism and frankly speaking I'm disgusted with your behavior. I figured you were just a weeaboo that's slipped a bit too far into degeneracy, but now it's extremely disconcerting to hear you work directly with vulnerable kids.

@SleeprunnerInc How is bathing your child as a parent remotely comparable to the bath scene that got cut? On any level? lol You say people can't differentiate between fantasy and reality, but you just used it in your argument.

I personally got a vibe of older siblings giving their kid brother a bath. How Al thrashed about reminded me of how I used to thrash about when my parents bathed me back when I was like 4 to 5.

@plamplight I don't see that as concerning at all. The scene isn't promoting sexual abuse of children. It is honestly a rather tame scene.

(Also there are studies that show lolicon/shotacon actually normalizes sexual behaviour towards children, making consumers of it more likely to commit acts of pedophilia)

i do not see any "lolicon" or "shotacon" in pso4 nor the stuff that got censored....oh wow a teen dude is touching a teen girls boobs while being blind wich is in some way "japanese sense of humor" ... wondering why two and a half men didn recieve any censorship for scenes like: "a 13 years guy getting told to rub the back of a 17 years old girl who is in a bikini with suncream...now that must be shotacon too...i dont even wanna go further and what kind "stuff" the young boy is going through with all the sexual jokes hes being told in two and a half men....and everyone watching two and a half men now have a"normalized sexual behaviour" towards children....that makes perfect sense

another example: a young boy about 3 years old is touching the boobs of a girl in king of queens - with big laughing in the background as he does....now where are the people saying "thats shotacon" ? or watching king of queens (wich is one of my fav shows) should get heavily censored because now "people watching this are in serious danger to normalize sexual behaviour towards children"

Yeah thats some american double standarts... TV seems to be different from videogames.... Violence is perfectly fine too. You can see someone shoot someone in the face, thats ok. But if there is a nipple to be seen, hell breaks loose.

That bathscene is ridicolous... I wonder what those complainers do during spring break in florida for example.

they made it all look like a game in something perhaps similar to how SAO works.

They in fact did not do this. Only those able to manifiest Avatar Arms can dive in and the diving in is closer to Momsekai (an amusing but disturbing comedy series, Shirase is easily the best part of that show) than SAO

I have no idea what is this Momsekai you speak about until now that you bring it up. I only have SAO to compare. Then again, those who played it as a game without going in, may have played by watching a PC monitor just like us in real life, as there's no mention of any VR gear being worn. But those who could enter the game completely, experienced it all like a VR game, which is why I brought in the comparison to SAO, which is the first story about such a thing I knew about.

Anyway, quite a job you did on that last post tagging a bunch of people to correct them.

@Mattwo7 well, by now. I am just throwing out random blanket info. Nothing else. These threads are becoming dank simp level meme quality now.

Right now, just lurking and throwing the blanket about at random. Leaving the "coherent logic to you and the few others."

Unfortunately the rest of the world doesn't share this view. And in some areas it's probably even illegal. Thus the deleted scene.