Okay so you pretty much do have to start over with NGS. You keep cosmetics and some weps and armor. but thats it, your character pretty much recives a full wipe when moving to NGS.

Very questionable way to do an expansion. At this rate NGS might as well have just been its own seperate game. I mean it pretty much is after that.

You'll have time to transition, so no I don't think it is questionable. Plus you can play old PSO2 on the side if you aren't ready. (For some time, probably up to 5 years)

Gameplay looks solid. If cosmetics do indeed carry over, it looks like they are a company that learns from not just their own mistakes, but that made of another company. One of Destiny fans, biggest problems, was that they couldn't carry over their cosmetics. As silly as that sounds, players like to look the part of the bad a**, not just have the ability. Or in the case of the tiny rappy player, with the large a** sun hat, comedy is key. Still a bit until August, then there is several months until 2021. Overall, this overhaul looks awesome.

@Zizel Because rebalancing all of the old weaponry as it was, would be a lot harder than creating a new texture and mesh for old cosmetics.

@Zizel to me also, it is basically a separate game. The current method they are doing looks to me as a method of incentivizing PSO2 players to move over to PSO2:NG. FFXI going to FFXIV was a completely start over, so picking from PSO2 and FF method, I think I would prefer this - at least I get to keep some stuff

I'm honestly done. This was in the works for a long time. They announced it well after NA release. Seems like they def planned to take advantage of us NA players being happy that we could finally see the game. I'm over 300 mil Mesetta in and all classes leveled and i'm just like, why the fuck play anymore until NG releases. Just feels like a burn to both JP and NA players.

@HarmlessSyan As a FF11 Player i feel this Comment in my bones.

Im on board with this... tho I think my 12 character Farmign days are over... With 1 gmae its a job. with 2 games its a career

@xSkarwindx PSO2 will run alongside the Genesis build, and you can freely transfer back and fourth, if their official posts to players questions is to be believed. Cosmetics supposedly carry back and fourth. Meseta will still have value, for the last five years of the older PS02's support. I'd read into things before getting bent out of shape.

Honestly, and I don't blame them for doing this. It is a wise calculated effort not to split the player base. If they announced PSO3 many people would just jump ship and dump PSO2. People here have said as much. However, with the crossover and with the promised graphics overhaul, they get to branch into the newer territory without losing their hardcore fans. Who knows? Maybe with time they just phase everyone over to New Genesis that way the transition may be less painful.

I just figured out how transferring 1000 years, back and fourth would make sense plot wise. We are already friggen time travelers

@xSkarwindx I can understand how you feel as a NA player as the game is still new and people have put alot of work into the game recently. As a JP player (I can't speak for all) we were all expecting something as we are celebrating the 8th anniversary of a game with a 10 year plan. The original JP trailer which has over 3 times of views as the NA one have been generally well received- with the JP comments mostly focused on character data carry over and yes, mainly the cosmetics also. 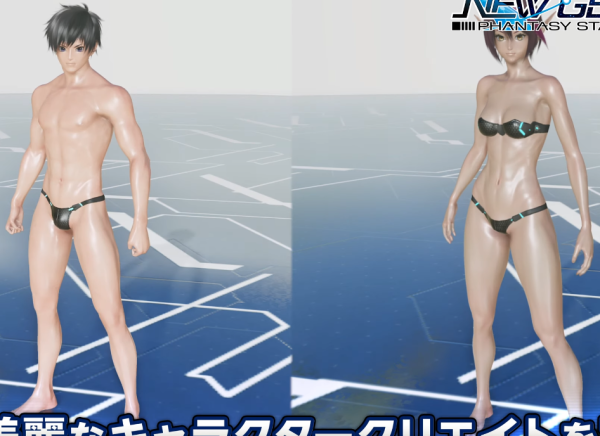 Why was that missing on the English Geneis follow-up video? More signs of lame censorship/treating NA(/this version) differently? Would of lul'ed if the next sequence showed JP vids ver had a lower initial character height, but didn't from what saw... (screen from JP's "follow-up" vid, 1:17 mark: https://www.youtube.com/watch?v=GSJ_q-0ZyDk)

@RocKiee-Kyrosu oof, I guess this is the difference in CERO D (17+) and Teen. But yea, even in PSO2, NA is missing the smart inner that JP start out with

Gonna be honest this was a double edge sword for me i am happy for pso2 new genesis reveal ,but this also makes me not want to play the o.g(got all char max and decked out etc)pso2 i am just gonna spend my remaining meseta on fashion items no holding back now goodbye 300m and wait for the release of pso2 genesis. ( still got 2 months left of premium but really not motivated in making the meseta and that s not the game fault of course its just me) see you guys in pso 2 genesis hope all fashion and inventory space i bought carry over ^^ .