This topic has been deleted. Only users with topic management privileges can see it.
last edited by zaffy2005

I don't know if ISO posts are appropriate here or just recruiting, but here goes.

Relatively "new" player, joined about a month ago, made my own alliance on Ship 2 for the sake of progressing through tasks. Called it "Cacoethes," an obscure term long fallen into disuse meaning "an overwhelming compulsion to do something inadvisable." But don't have any actual members. Grinded it up to level 5 on my own. Got probably another 3 or 4k AP. Also made the alliance myself because I figure I can't get booted from my own alliance for not meeting some kind of quota or not being "active" enough. Prefer more the "laissez faire, just enjoy the game kind of approach. Some people enjoy a game by going all-out hardcore grindfest, some enjoy it just by collecting shiny stuff or having the most versatile selection in their wardrobe.

Anyway, its just me, and that's not very useful when I actually "need" other players involved. Like for a certain shortstack Deuman cutie's Client Order that can only be completed by having at least two other players involved. And I'm sure as the game progresses and content expands there'll be more and more reason to have other players involved. And honestly, my "Laissez faire" approach kinda makes me fairly inept as an "alliance leader," mainly because I haven't gotten invested in the alliance system enough to know what makes it tick and what alliance members would expect from a leader.

So, I guess at this point I'm looking to do a merger and I'm hoping that lets me bring my current stock of AP to the new alliance. Not looking for special privileges or whatever, just looking to hitch my proverbial trailer up to someone with a similar outlook of just enjoying the game, no pressure, no quotas, no one being called out for "not pulling their weight," and no one getting their feelings hurt if schedules (when we can play) OR agendas (what we want to do when we CAN play) don't line up, even if it happens more often than not. People have lives outside of the game, and everyone has their own goals. Been through the whole list in this thread and the encompassing forum looking for candidates (PSO Operators looked promising) but I figured I'd just come right out and ask if there's anyone out there looking to add another member by absorbing my little solo act alliance and is cool with my style of gaming, particularly in light of the upcoming alliance campaign (that scarf looks pretty cool).

So, any chill, laid back, zero pressure alliances on Ship 2 looking for another member? Current "mains" are Ranger (lv67, mainly AR but I"m learning Launcher, slowly), Braver (I think 48 or 49, primarily Bow since I like to keep my distance) and Force (50 or 51, prefer Talis at least until I can get this "Psycho Wand" everyone's talking about). Honestly haven't been paying too much attention to their levels, I just know they aren't "max" yet (and will be "starting fresh" eventually to make my way through the list of classes to unlock all the bonuses).

Oh, also, I'm on Xbox One, if that makes a difference. And while I do technically have a Discord account I pretty much never use it. Ever.

Anyway, its just me, and that's not very useful when I actually "need" other players involved.

I can join you, but first you would need to switch to Ship 01, sadly I'm going to be there since I'm not a fan of these people that are on Ship 02 :(.

@Chiryuu2609 I don't have the means to change ships. And aside from a couple randoms jumping into my party one time and then complaining to each other in the public chat because I hadn't jumped right into a quest for them, and the occasional "burner" account made just to run around the Gate Area spamming Meseta Sale Site spam (which I'm sure happens on every ship) I haven't had any issues. But then, been pretty much entirely a solo player, so not a lot of "interaction."

@Chiryuu2609 I don't have the means to change ships. And aside from a couple randoms jumping into my party one time and then complaining to each other in the public chat because I hadn't jumped right into a quest for them, and the occasional "burner" account made just to run around the Gate Area spamming Meseta Sale Site spam (which I'm sure happens on every ship) I haven't had any issues. But then, been pretty much entirely a solo player, so not a lot of "interaction."

I'm basing my opinion just on people from this forum that are all high and mighty saying "Ship 02 the best, we rox, blah blah blah", maybe ing it's not as bad as here, but I don't have enough time to test it out so I would prefer to try on Ship 01 or new Ship if it gets created. Well anyway - good luck to you, I hope you will find people to play with ^_^!

@Chiryuu2609 Thanks. Heh, far as I understand it the Ship Transfer feature hasn't even been enabled for the NA version yet, and will cost AC if/when it does get enabled. My budget's a bit too tight for that kind of stuff just yet. But again, thanks for the offer.

Black Wolf Company is a new alliance recruiting players who really want to enjoy PSO2 to it's fullest capabilities. Our mentality is to continuously seek knowledge and better ourselves. All are welcome to add to our library of knowledge. Let us strive together to increase our power, knowledge, and standing in ARK. If you have any questions you can message me on discord: Nade#1164

Hello, Ship 1 looking for PC players. We have a lot of xbox members and want to finish up our cap 100 with PC members. Competitive but also Mature and easy going. I understand you have a life to live. Let's just enjoy and love this game together. Founder of Shadow Cross. Back in 2003. We also have a new discord.

Welcome to the New Alliance of PSO2s finest! Why settle for less, when you can be the best!

We are welcoming the merger of XBOX/PC with an alliance built for the progression of both New and Old players!

Looking for an alliance where you can sit in the lobby and have a good time, we do that! Or maybe your into end game content whether it be EQs, AQs, UQs, Suzie Qs or plain ole Boss farming! This is definitely the place for you!

Whatever your pleasure, P L A T I N U M Alliance has got your back!

With P L A T I N U M being a new Alliance, I am currently searching for ACTIVE and reliable leaders willing to uphold officer positions. Your responsibilities will include in game Moderation, Discord Moderation and Maintenance, making yourself available to all alliance members for help. These positions come with many in game benefits into which will be determined by productivity.

P L A T I N U M is a for its member organization!

Have that friend join our Alliance in game

Think your our best dressed member? Upload your characters fashion to our Discord page for a chance to win our monthly fashion contest!

(Prizes determined at the time of contest)

[Ship 1] Gekkostate - New players, social discord, working through this together!

Fans of the series, about 6 of us have founded the Gekkostate and have begun our climb to the endgame! Everyone is new and still about mid level (40s) learning everything and helping eachother. We are usually on early to mid afternoon ET/CT. The schedule will vary on the weekends so this is def a guild that you can come in and casually hangout and grind through without worry about strict guidelines on participation.

We have a Discord gaming community where a lot of us hangout and talk PSO 2 (as well as some other games), please hit me up below and we would love to have you!!

Our Alliance is geared toward a casual playstyle. We don't really desire to use a website, and we probably won't be using a discord. Rather, we encourage people to use the in-game alliance chat and message board to converse with others. We probably won't grow too big as a result of this. As of this post, our alliance is already level 4 despite only having three members.

If you would like to join, please find me, or RPGpro while we're online and available. My in-game player ID is the same as my username on the forums here. 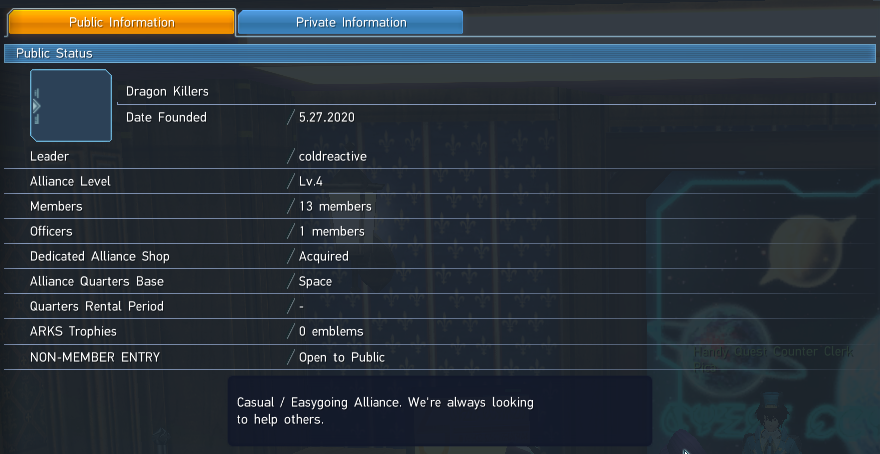 We are a community-based, Social/Raid Alliance that strives to give players some of the greatest experiences in PSO2! We accept everyone to anyone to join in our cause to spread that SWAG all over the ARKS Fleet! (Newcomers to JP Veterans, XB1 to PC)

JOIN SDZ Today and discover the SWAG hidden within you!

[If you would like to know more about our alliance or Interested in joining our cause, fee free to hit me up on our official discord: https://discord.gg/sCm2ZXg , Discord DMs: SwagDragon

Black Wolf Company is a Ship 2 alliance recruiting players who really want to enjoy PSO2 to it's fullest capabilities. Our mentality is to continuously seek knowledge and better ourselves. All are welcome to add to our library of knowledge whether you're new or a veteran. Let us strive together to increase our power, knowledge, and standing in ARKS. If you have any questions you can message me on discord: Nade#1164

The alliance is a open one where any can join. It a place to help others as well socials as well. Most of us are fairly new but are willing to learn!

Are current member count is 22 and we've have reached level 5.

If you wish to join send me a DM on discord (MortyGx#3136), can find me in-game as Silica Asuka or join the alliance Discord at https://discord.gg/yyXZ45q.

I won't go into too much detail in here with paragraph and all, But short is its a play at your own pace alliance for those who have jobs and family but still play on weekends or certain days. (4 hours a day/12 hours a week or something) So if you want to be in an alliance but afraid u cant be that active then come and join us!

heres a link within the thread in this here website for the detail version.