This topic has been deleted. Only users with topic management privileges can see it.
last edited by
R
Rumi7364

So I did some tests recently just to see how bad the restrictions were. Incredibly, I can say with certainty that the actual minimum height is in fact not 150cm, but 153cm, which is even worse. Just barely 153 cm as well. There are about 3 units per cm when moving the slider. For reference, I was only able to move down one down click from 154 to 153 on JP. Clicks 2 and 3 fail to work.

This means in actuality the minimum height in NA is something more like 153.67cm or 5'.5". Below is a screen of something like 153.33cm. Here is the female dewman file which caused the below screenshot: https://1drv.ms/u/s!AmsmLjy_fwAMgfJTBzBXAa6tzbmnbQ?e=ethmcc 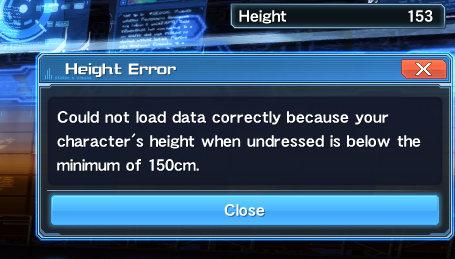 Also, a "bug" of sorts I found the cause of. I know a few people that have mentioned that characters with heights higher than the minimum by a good bit, ie 170cm+, get the below minimum height error. I believe this is due to the separate cast and flesh body proportions settings on fleshy characters, since it is saved onto both body types no matter what.

The "Automatic Synchronization for Model Editing" option within Options->Game Settings->Other Settings, if set to Synchronize models, will keep the heights together and allow someone that makes their character tall enough to get load their character fine. However, if for instance, someone made their character small, turned this setting to "Edit models separately", and then increased their character height, the cast height would remain unchanged. This isn't a problem in JP as it doesn't affect anything. However in NA, this means a character loaded from JP could have this problem and because the game checks the second value for non casts, the non casts can be affected even if the only height their character shows ingame is well above the minimum.

tldr; if transferring short chars from jp, make sure cast and human sync is on before changing your height in salon.

Just here to voice my additional support for removing the height restrictions. While I think I understand the sentiment, it effects gameplay, returning players and people that are legitimately short from making accurate characters.

That, and nefarious individuals will just use the Auxiliary instead. Which is always under 150cm.

If there is some legal reason why a character has to be 5' in a video game, I'd like to hear it.

@Frost-Soar I don't think only the left has this. People with strong religious values on the right (not SWJs) are also against portraying minor-like characters in sexually suggestive environments (I believe it's one of the points the left and the right agree to). So I feel it's more of a cultural moral thing based on what the West has learned and embraced thanks to Christianity (again, both the left and the right from Euro and Western countries have strong ties to religion). Now, while I'm not part of it, Christianity is definitely not wrong (Europe and America have thrived the way they have, strongly because their unwavering belief in Jehovah), but not all of the world has accepted that religion, so culture can be widely different in places where it's not the dominant moral factor. And porting products from non Christian places can usually give the so called culture shock. Which is why I usually see censors such as this one to try and soften the product for these audiences.

But things are opening up recently with how the Internet can easily connect countries and reveal things about every one of them. Eventually, humans in different places grow accustomed to at least seeing (without sharing) other cultures. And we being here in 2020, I thought we'd be already open minded enough to not need to censor something as height in a game like this.

But again, the most likely person to seriously complain to Microsoft and Sega's management about a semi naked loli-like character in this game would be your average Christian soccer mom who goes every Sunday to church, and just happened to see her 10 year old boy playing this game on his Christmas gifted xbox1. And instead of controlling what he plays, as she should since moms and dads DO have that task, she's better off demanding a blanket cut off of the source material for everyone. Because if her son shouldn't be seeing it, the 40 year old self sustained 90's gamer minding his own business and only looking for some escape from the real world for a bit of time between job schedule, shouldn't see it either, because it's "morally wrong".

Hello operative! Unfortunately we're unaware what the current state of this feedback is. We only see the end-result, and there has been none as of yet. We will continue submitting this to the team as feedback, however, until we're advised on it.

Sexualized underaged characters are morally wrong. (though art has no age- as artist style and interpretation is entirely up to them..)

There have been many good suggestions in this part of the forums about things that NA would like to see changed- many would come with some negative effects- like changes to affixing making it easier for people who waited to affix might upset those who put all their meseta into it right before- or bringing back AC scratch items from pre-pc might hurt the economy and some peoples hard work. Changes to names in story would make the dub inconsistent- etc etc. Every suggestion comes with some sort of side effect to the playerbase.

Except this one. There is no reason changing height would have any impact on the game- it could be done in a hotfix incredibly easy. IT doesn't need a big patch nor does it need costumes to be refit or redesigned. It would not impact the game in any way other than allowing players more freedom in the creator and show that our voices can reach the Dev team. If we can't even get this small thing changed with it being incredibly simple and easy to do and is very much wanted by the vast majority of the community- this whole section of the forum might as well not even exist.

This is a test to the developers whether the game will be supported going into the future and if there is any line between the consumers and them. It's a win/win situation for everyone involved and if they want their flawed moral stance over making their playerbase happy- then the game will simply not last long. There is a superior version of the game right next door without installation issues, with a better translation, more content, more players, and without a restricted creator. . Just don't blame the game for being niche when it dies. It could have been avoided with proper support.

Not what I said. Bad argument. Almost as bad as the other arguments you've had in other threads.

@XenoBladeX37645 Technically it's a chance.

If enough people get upset about it and spread the word and we start seeing more signs of censorship, it could lead to a situation where people just deem it unacceptable and if the dev's do not make a compromise, it could kill the game.

@MoldyAsp33874 oh, like what? And how is that a bad argument? also @SleeprunnerInc id agree but only in the case of more censorship being put in. I don't think height alone will kill the game is all.

@SleeprunnerInc id agree but only in the case of more censorship being put in. I don't think height alone will kill the game is all.

Height restriction already means Mini Suits will not be allowed ingame. (The humanoid minisuits) That means future content will be removed. If you missed every single point in every post about it- it's not about the Height as much as it is about what it means for future content.

Why do I have to keep mentioning this?. NA will absolutely not allow certain content that JP has- in the future- if they're stuck on short height = bad. And if they want to stay on this stance it's going to make people worry- and worried people have a higher chance of leaving because they don't want to deal with a game where there is no support. Not even PSO2 Twitter will answer your questions- they just RT peoples costumes even and say COME PLAY PSO2.. Yet refuse to respond to peoples error questions or talk about a roadmap or address any concerns whatsoever- be it technical or otherwise. There is just no support for this game- They release new banners for the whales- cash in- repeat. Eventually the whales won't want to spend anything on the items to sell to the community because the community continues to dwindle without support resulting in more blocks closed and a ghost town of a game.

There needs to a voice of support. We know this is Sega of JP- so it's a bit difficult to get word- and NA can't tell us everything because they don't know everything that JP plans. But someone should move our questions to JP and bring back answers. Which was apparently done by GMs here- but there is no update on that- meaning concerns are either not reaching JP- JP refuses to address concerns- or they don't care/know the consumerbase wouldn't like the answers they have. All are very bad for the longterm survival of an MMO.

@XenoBladeX37645 What they are saying, is that any censorship, opens the door for more censorship later down the road. Which isn't unheard of , especially here in the U.S. Far too many people complain about the dumbest things, so the government, or some corporate entity has to play the role of the parent, to then censor out things people find offensive. The censorship criteria often starts out reasonable enough, but then explode later into something far worse.

Where height is concerned in this game however, is not just about the censorship, but the simple fact that it makes importing character data over from the JP version of the game, impossible, unless they resize said character.

https://i.gyazo.com/506c564b499ce66010d5bf72570e1462.jpg These- But this isn't all that would likely be removed. They would likely remove certain cosmetics that look like they're for younger characters.