Levelling up is such a drag in this game

This topic has been deleted. Only users with topic management privileges can see it.
last edited by Wintermute9

Well maybe you are right, I havent played many MMO's just this(Which isnt really an MMO) BDO(Which lacks any challenge outside of PvP) FFXI, FFXIV and a few others but not for a very long period of time.

On a pure gameplay front,, I would say I enjoy this game more then FFXIV but I would say the Raid Boss encounters in FFXIV are more enjoyable,Especially on Extreme, Savage and Ultimate(Everything outside of that is just boring though) I find the mechanics are just better thought out and give the battles more depth and team coordination(FFXI also works in a similar manner), which is what I enjoy when playing an MMO,)If I want solo challenge, I just play SoulsBorne type games Or Monster Hunter.) Here it kinda just encourages lonewolfing and the mechanics itself are incredibly shallow, The thing that makes it worth while is the combat and character building which has more depth then FFXIV shallow progression system..

Yeah I have heard "solo" runs and self imposed restrictions are usually the way to go for this game if you want challenge, but I find self imposed challenge(Handicapping yourself) not really my thing, I am more interested in how the game can challenge me, not how I can cripple myself to make the game more challenging. But I understand this game isn't really about that so it doesn't really bother me in the long run, its still fun in most areas.

This is not a mmorpg like heal tank DPS it's more like skyforge with anime. If that's not your jam it's not for you. It's not a full fledged mmo if anime diablo isn't what you want which is understandable. Then those players need to hit the road jack. The charm of this game is that it's anime waifu diablo skyforge style game that's the niche market it's trying to satisfy

Kinda hard to compare when they are two completely different games. OP loves up compare this game to XIV from previous post anyway. You just need to come in thinking....this isn't FF or any other game lol. However, this game came do some QoL such as a better party system such as Duty Finder. Hell, even WoW has a better system than this shit and it's like 20 years old about lol.

@SleeprunnerInc said in Levelling up is such a drag in this game:

@Zipzo With FFXIV you can level yourself up by doing dungeons, raids, fates, beastmen tribe quests.

You have a myriad of ways mate.

Did you ever play it?

Not to sound rude - but this laughably innaccurate.

Yes, you can level by doing Dungeons and Raids, but that's not entirely accurate to how the system actually works. It's not the dungeon or raid it's self that's lucrative, but the Roulette Bonus. Because of this, the majority of players strip their gear down to ensure that they get the easiest possible dungeon or raid to pop - usually Crystal Tower or one of the early ARR dungeons, which leads to you mindlessly going through a dungeon with a quarter of your job's actual abilities against enemies and bosses that fall over from a gentle breath. And since the roulette bonuses are only good for one run a day, it means that leveling via Raids is not at all viable in any stretch of the imagination, and that leveling through dungeons means spamming the highest level dungeon available to you after you've done your roulette - literally no different than leveling through VHAQ Floating Facility in PSO2.

As for your other methods - Beastmen Dailies are not at all a viable way to level. Ignoring the fact that the EXP they award is abysmal unless you're doing the current expansion thanks to SE gutting the EXP awards from non-relevant expansion dailies, the Beastmen Dailies only offer a single set of three quests per day that can be finished in the span of five minutes, and usually involve no real game play, other than clicking on the thing (though you might get lucky and get to kill something once in a blue moon).

And Fates have been dead in Shadowbringers since the expansion launched. Fates have never been a viable way to level up - the EXP they award is, as so many other sources of EXP, laughable. The only thing SE wants you doing to level a new job in XIV is running dungeons, which is no different than what PSO2 is right now.

So please, don't try and tell people that XIV leveling is so much better - it's not. And heaven forbid you decide to create and level a brand new character - nothing like having to go through literal hundreds of hours of mindless quests and mandatory story just to access basic gameplay elements like later expansion jobs.

PSO2 might be a grind - but it sure as hell better than XIV's grind. And yes, I have played XIV since ARR, and have well over a thousand hours of gameplay time on it.

@Morgothryuzaki said in Levelling up is such a drag in this game:

For real the experience gain is horrible when you cannot have 3 more people for advanced quests.As much as in FFXIV it can take a while,at least it rewards you with enough experience with dunegons and a myriad of alternative ways. Right now its basically spam the same quests until the end of times.. I hope this gets better with time.

Sadly advanced quests are not the best for exp, I'm working on my 5th job to 75 and I only been playing for about a month.

Pretty much maxed all characters and almost all class cubes within a week during ARKS Rally, and even outside of that AQ is the best exp per hour since nothing else is in the game that be grinded that efficiently and without restriction.

Only exception would be running Magatsu story solo but that gets inefficient once you hit level 60 or so, and you actually need to kill him fast (1-2 minutes) for it to be worth it.

If you have capsules to spare and are solo, boss rushes at +50 risk are your best bet, a fully infected boss yields a lot of exp and you can just run through the quest.

I don't see how that's bad at all, with around 200% (that would be daily Tri, 100 Tri and 50 Exp) total EXP you get around 115k per Banther for example and you get to kill two of them, considering you can get through it in 2-3 minutes. Yes you aren't always gonna get them, but it's still decent EXP for when you are solo and have nothing else going on at the moment.

Do you guys find it difficult to get a PSE burst with NPCs? I've heard this before but I get more bursts with a party of NPCs on AQs than I do with human players. Been doing AQVH at 50 and making fast progress. I could have maxed out several characters if I didn't spend most of my time parkouring in the lobby.

@Macmaxi said in Levelling up is such a drag in this game:

I don't see how that's bad at all, with around 200% (that would be daily Tri, 100 Tri and 50 Exp) total EXP you get around 115k per Banther for example and you get to kill two of them, considering you can get through it in 2-3 minutes. Yes you aren't always gonna get them, but it's still decent EXP for when you are solo and have nothing else going on at the moment.

The chance of rare fully infected is pretty high actually, and i remember getting 600k Exp for a SHAQ Spider before, i'll gladly check this later for you if you don't believe me. 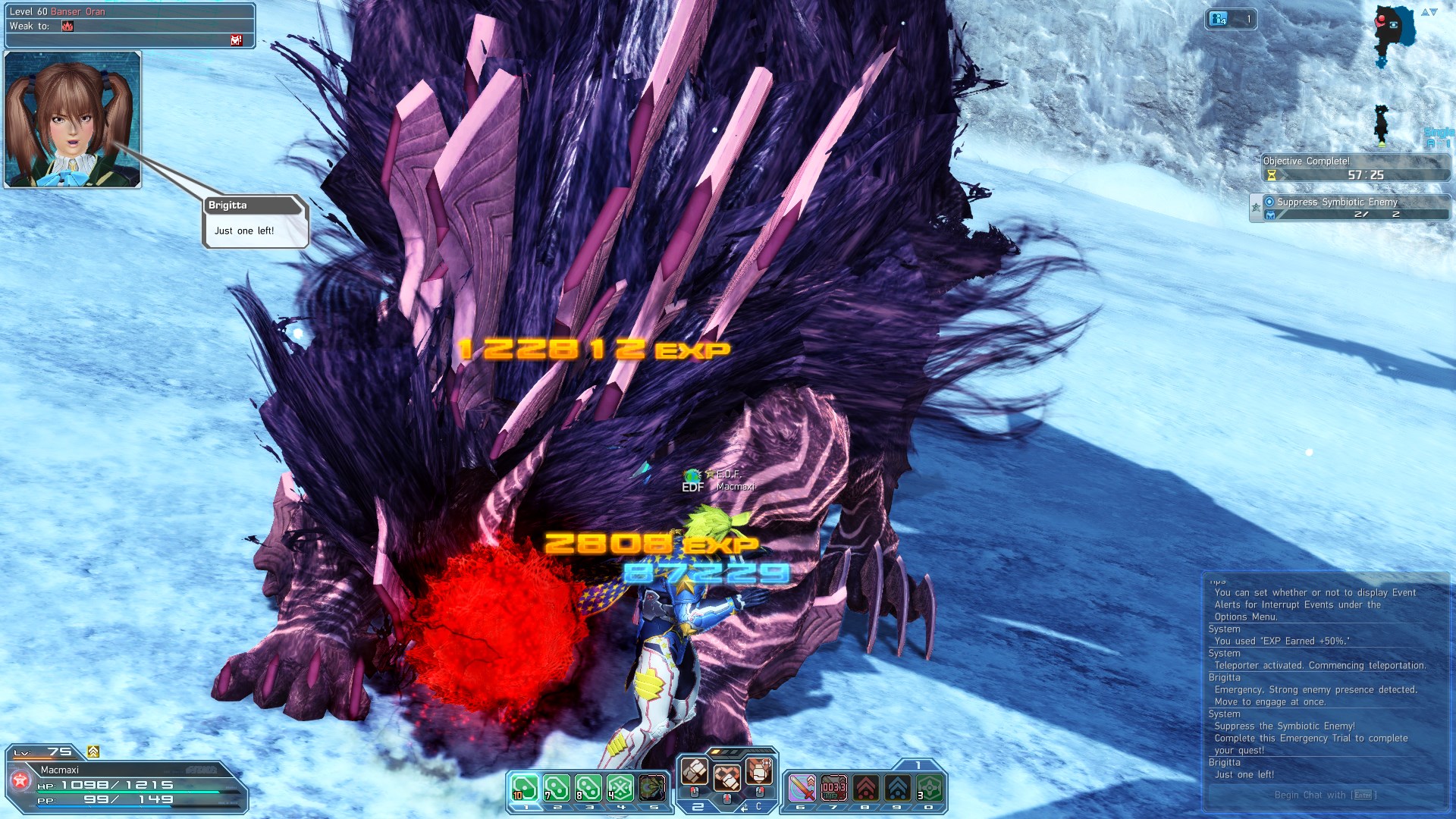 That being said, Magatsu Story will net you higher exp per hour and it doesn't waste your precious Tri Boosts (they don't run out in story missions but they still affect exp), you just have to get good enough to get Magatsu down in a timely manner for it to be really valuable.

@Macmaxi said in Levelling up is such a drag in this game:

The chance of rare fully infected is pretty high actually, and i remember getting 600k Exp for a SHAQ Spider before, i'll gladly check this later for you if you don't believe me.

That being said, Magatsu Story will net you higher exp per hour and it doesn't waste your precious Tri Boosts (they don't run out in story missions but they still affect exp), you just have to get good enough to get Magatsu down in a timely manner for it to be really valuable. 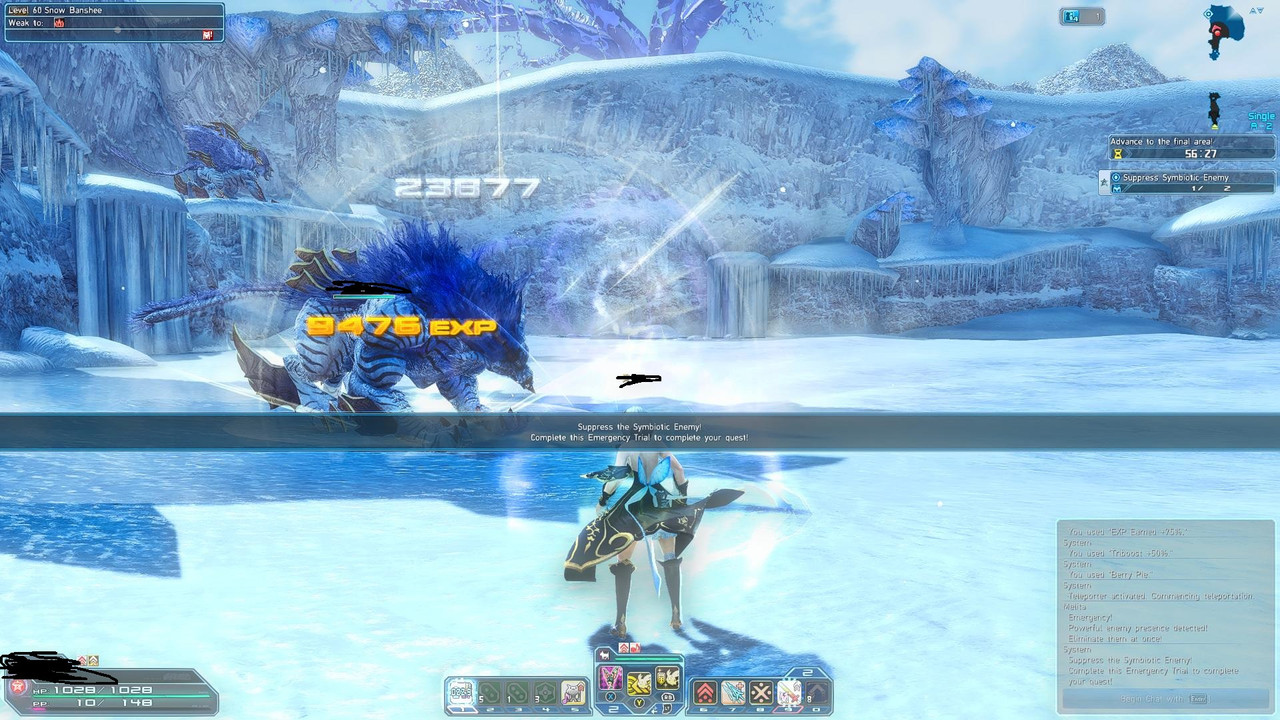 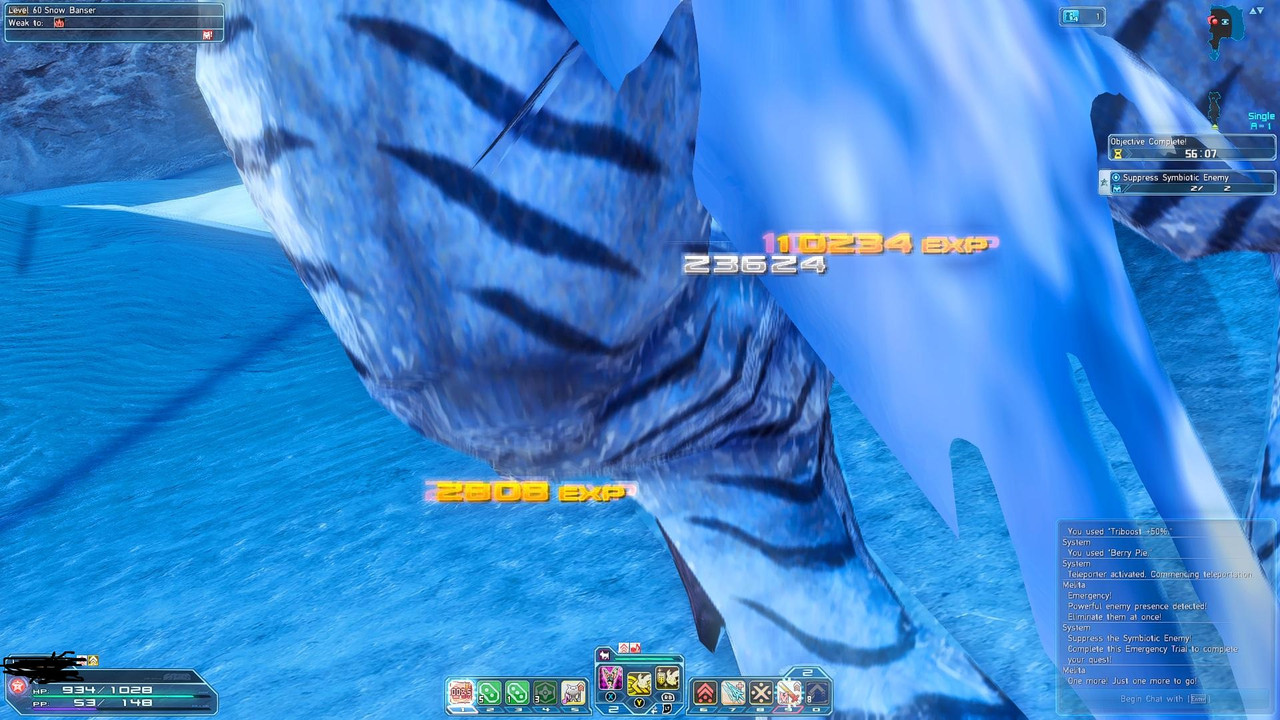 And i too mentioned you aren't always gonna get rare, it still is fine EXP compared to most other things you can be doing and if you run specific bosses you can even get some money out of it. And if that really wasn't enough for you, SHAQ is also a possibility.

If you really hate playing the game so much, you know you don't have to do it. You can just play 1 class, just like i played only 1 job in FFXIV.

Considering how fast you can level in this game, compared to other mmo's i'm suprised anyone is even complaining about this. Just wait till black tagamis come out then you can cap your class in a minute.

If you have a group of friends/alliance members, VHAQs are a good way to level up, though they can be a little boring since going into a corner during a PSE burst and firing a launcher nonstop (or if you're ranged, whatever else you have available). Don't forget to pop your exp, rare drop and tri boosts as well! I say rare drop boost because it will help you gain more photon boosters which in turn can be vendored for a ton of meseta (you're going to have more than you will likely ever use). Note that I say VHAQ, since the cleartimes are much faster and end up getting you more experience overall in the end compared to SHAQ where the enemies jump up quite a bit in health and general durability.

A little bit of organization and you can get quite a few levels under your belt within an hour or so.

Alternatively, while it's a little slower going, you can complete a bunch of CO's at once and turn them in on the classes you're trying to level. Though note that the exp scales with level. Also daily missions give a fair amount of exp that isn't affected by the level of your class, which can help a little as well. The good thing about this is that you can level other classes more passively if you want to play one you have already gotten to 75 with.

Oh, also one thing that I didn't realize for a while is that you can actually stack the duration of the same booster up to 2 hours if you use it multiple times (after using one it will prevent you from using the same one for a few seconds unless using one would put it over the max duration, then it just won't let you at all, so don't worry about the displayed message saying it'd have no effect). This also goes for the pie from the current event which is a nice extra 50% triboost that stacks with everything else.

Anywho, hope this helps and isn't just repeating what everyone else said.