This topic has been deleted. Only users with topic management privileges can see it.
last edited by KYBELA

Please.. I need help.. Purchased the Ragol Memory Fashion Pack. (& had to jump through hoops to do it) I got the Memory fragments and used them ingame on the Talis C.A.R.D. skin but...... it won't let me equip it. says it's for a Harmonizer & idk what that is or has to do with PSO ep1&2 so i would like some help with this. PLEASE. I'd rather not have to request for a refund. as i went out of my way to spend $30 for this ONE SINGLE ITEM in particular.

I also really wish there was a "Sita Mag" skin since that was my favourite PSOep1&2 mag for every reason, even its photon blast & difficulty to create. That's a different thing though, was going to suggest that to help make the devs more money..

Please help however you can. IDK if i need a tech support route (like is this a bug?) Or whatever needs to be done to fix this. Either fix it for Talis or Please refund my purchase. I'd rather it got fixed so the INGAME WEAPON can actually equip the CAMO for it. (I did purchase it afterall)

I really loved PSO the series ever since playing on GameCube for 10+years. but this is really saddening. Not really feeling the "FOmar love" at the moment

Edit I think some misunderstood. i searched the web high and low, official and non official sources, NOTHING said this item was for "Harmonizer" till after i purchased it. I was under the assumption this was a graphical glitch with the Talis Camo. Apparently, at least according to this thread... it is NOT a "Talis Camo" (or rather it IS a "Talis" Camo, but not for the Talis Weapon) I am NOW aware of all this because NOTHING stated it ingame, during the purchasing process, or via research. I can read just fine thank you. this IS a Talis skin. i do not know why JP version supposedly did it this way but that does not excuse the fact this item was misrepresented to ME during the selling process.

thus i am a displeased customer, who wants to support this game & not get flamed for requesting support. ty

btw here see for yourself. this is a "Talis" or "Rare Card Weapon" from PSOep1&2 which this RAGOL MEMORY PACK is ADVERTISED to be representing. http://www.pso-world.com/images/items/taliss.jpg (note: it was a Force exclusive weapon..) & you can also see here, https://phantasystar.fandom.com/wiki/Cards_(Phantasy_Star_Online) the weapons were called "Cards" and the "Talis" was one of the "Card Weapons"

The C.AR.D. camo only works for the Summoner weapon, Harmonizer, and that is how it has been ever since the camo was introduced on the JPN server. At no point is there any indication that it is usable for Talis, so there is nothing to "fix." This is a case of user error, so the chances of you getting a refund are very slim.

I noticed there's another weapon that is supposed to work with summoner harmonizers, but doesn't, the text for it is actually cut off, so you can't tell what it's actually meant to be used as a camo for: 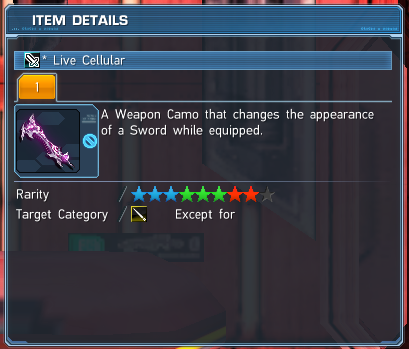 @coldreactive Yeah, it is just another in the long line of poor formatting instances in the localization.

Also, it isn't just for Sword, it is for all weapons except Harmonizer. That is the camo form of the now defunct "Live" series of weapons which never had a Harmonizer.

@coldreactive I mean, I'll agree with you, the way its positioned is terrible. But I figured out the meaning pretty fast.

Also, its not just a sword camo. It works for everything "except for harmonizer".

Yes, this is what I'm talking about too. Same type of issue but different item.

Look, i Searched for a week about the C.A.R.D item online and nothing came up at all.

Ingame it said nothing about What weapon it could not equip for.

I thought it was odd that there was NO ICON present at all to show me a TALIS. but C.A.R.D the Camo skin, IS the TALIS from PSOep1&2.

There was only a small number of "Talis" or "Card Weapons" in PSO on GC.

& there was NO HARMONIZER or Summoner in PSO ep 1& 2 nor BlueBurst.

So why would me, a former PSO player returning to the game buy a TALIS SKIN for a class unrelated to PSOep1&2 from a CosmeticPack ADVERTISING CLASSIC PSO SKINS ???

It's called FALSE ADVERTISEMENT is what it is.

Had it stated ONLY for {not a talis symbol} then SURE i would have been confused, but i wouldn't have purchased the thing. its not even tradable on the market. IT LOOKS REALLY SCUMMY from a business perspective. & yes i am within my legal rights to request my fake ingame currency be refunded due to NOT RECEIVING WHAT I PURCHASED.

The other people here can tell me all they want its "user error" and i should have read a description, but it was BLANK. thats what im saying to y'all. its a TALIS CAMO SKIN w NO DESCRIPTION saying "This is NOT a TALIS CAMO even tho it is a fkn PSO1 Talis.

Like.. the Weapon i USED for 10years in that game WAS ..THE.. "TALIS" look for yourself jeeeeeeeze.

Regardless of what happened or didn't happen in JP.. this is a messed up thing to do to a former PSO player who paid for a tribute to former pso players lmao 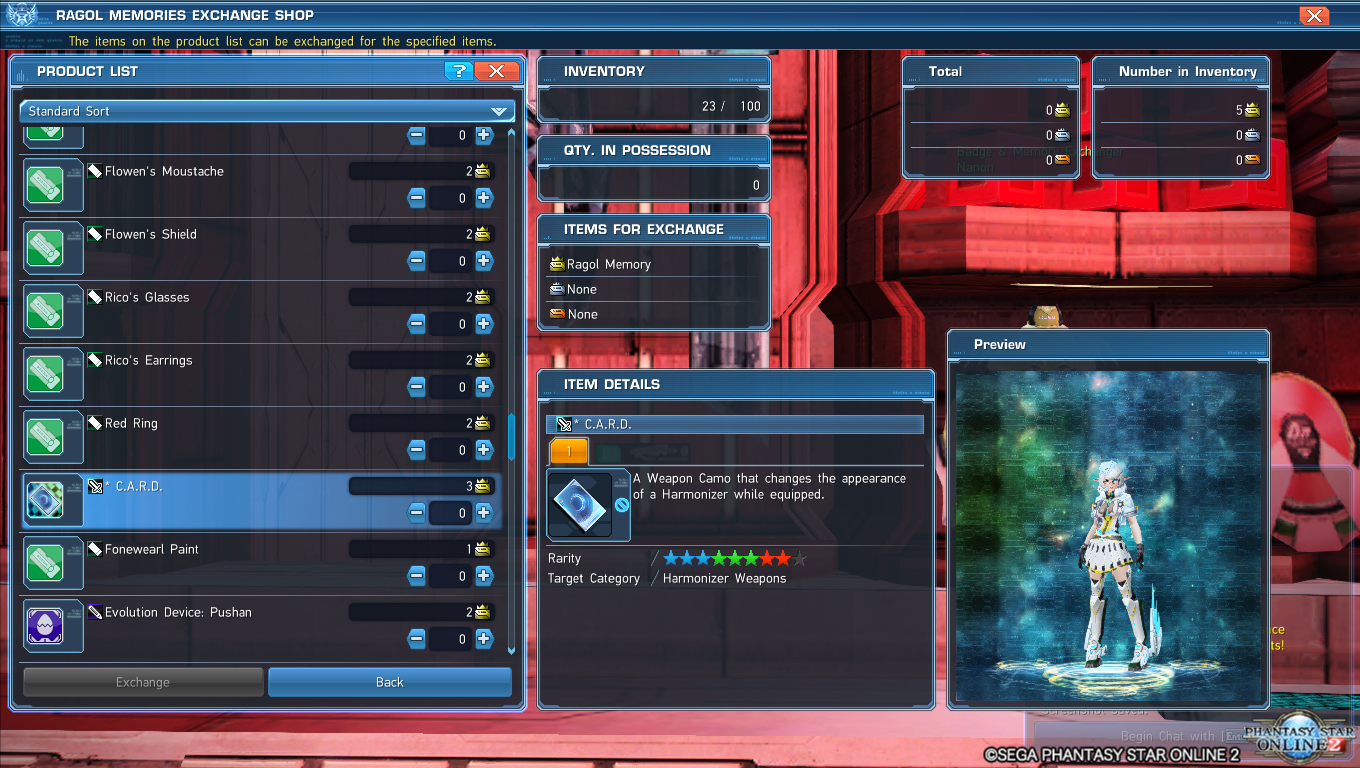 Additionally, from the Ragol Edition page on the official site:

if it was CLEARLY indicated i wouldn't be here complaining of purchasing something i didn't want after finding ZIP all week searching for C.A.R.D. and Harmonizer and finding 0 search results. Sure maybe before google restricted showing posts older than a year, i might have found something about it from jp. who knows. cause i dont.

My point is NOHING was clear about this. No information was present for me on the official website, during purchasing the Ragol Pack. & the ingame Menu is bugged.

I cannot be blamed for a display error, nor for finding nothing in a google search result. Nor not knowing something EVERYONE ON JP knew for years. WHILE I PLAYED PSO for 10years and i KNOW WHAT A "TALIS" IS & this is a TALIS.

it just wont equip. wtf. There was no Harmonizer or Summoner in PSO1.

y'all are debating apples and oranges. if you think im just going to bend over and accept this, you dead wrong. thanks everyone for not helping! cheers

ps i do need customer support if this is not an official forum or place where my bug reports will be taken seriously.

if bug reports are not taken seriously i WILL get my money back AND find somewhere else to spend it for the next 10 years. Thanks again! Nice Forum Community btw, Real Welcoming, GREAT for BUSINESS!

Hey how about you take your Elitest Attitude elsewhere before you regret it. Thanks!

@KYBELA It is unfortunate that you feel that people trying to present you with information to clarify your situation is not taking you seriously, and I apologize if I came across as rude.

To submit a support ticket, simply hover over "Support" at the top of the site, then select "Contact Us." This should send you to the support site where you can submit your request. Please be aware that tickets may take several days to be responded to.

@KYBELA How about you don't threaten people for replying to your post on a public forum? You made a mistake because you didn't read, accept it and move on.