What does a White Line under the icon mean?

This topic has been deleted. Only users with topic management privileges can see it.
last edited by
A
amspracklen8669

What does the white line underneath the Icon mean exactly? Is this the game not being able to find itself? Is there another way to fix this problem besides uninstalling and reinstalling?

It's supposed to be the download/update bar for MS Store.

If you updated Windows recently, I assume this is probably the dreaded "my game deleted itself because Microsoft Store deemed it so" bug. There are ways around this happening though, however I am not sure if I am allowed to mention it on these forums. It's definitely a better and much preferred method, however.

So, it's nothing related to updating Windows, because I just had this happen without restarting my machine. I last played PSO2 yesterday (Discord says I played 2 days ago, but it doesn't know anything at all apparently.) However, I haven't restarted my PC since before I played it last when I had issues with my keyboard saying @ was ' and ' was @. (I've had this key swapping issue before, across multiple Windows 10 machines, and different CPUs and different motherboards and different builds of Windows 10. Without PSO2 installed even.)

It seems that when this occurs, Windows for whatever reason deletes everything in the top level folder of C:\Program Files\ModifiableWindowsApps\pso2_bin and ignores the following files when doing so:

Everything in the lower folders, such as the data folder remains untouched. The bar doesn't appear until you've clicked the PSO2 tile or in the programs list on the left side of the Start dialogue/menu. Knowing that it deleted itself, I went into the advanced settings for the app and tried to use the "Repair" button on it: 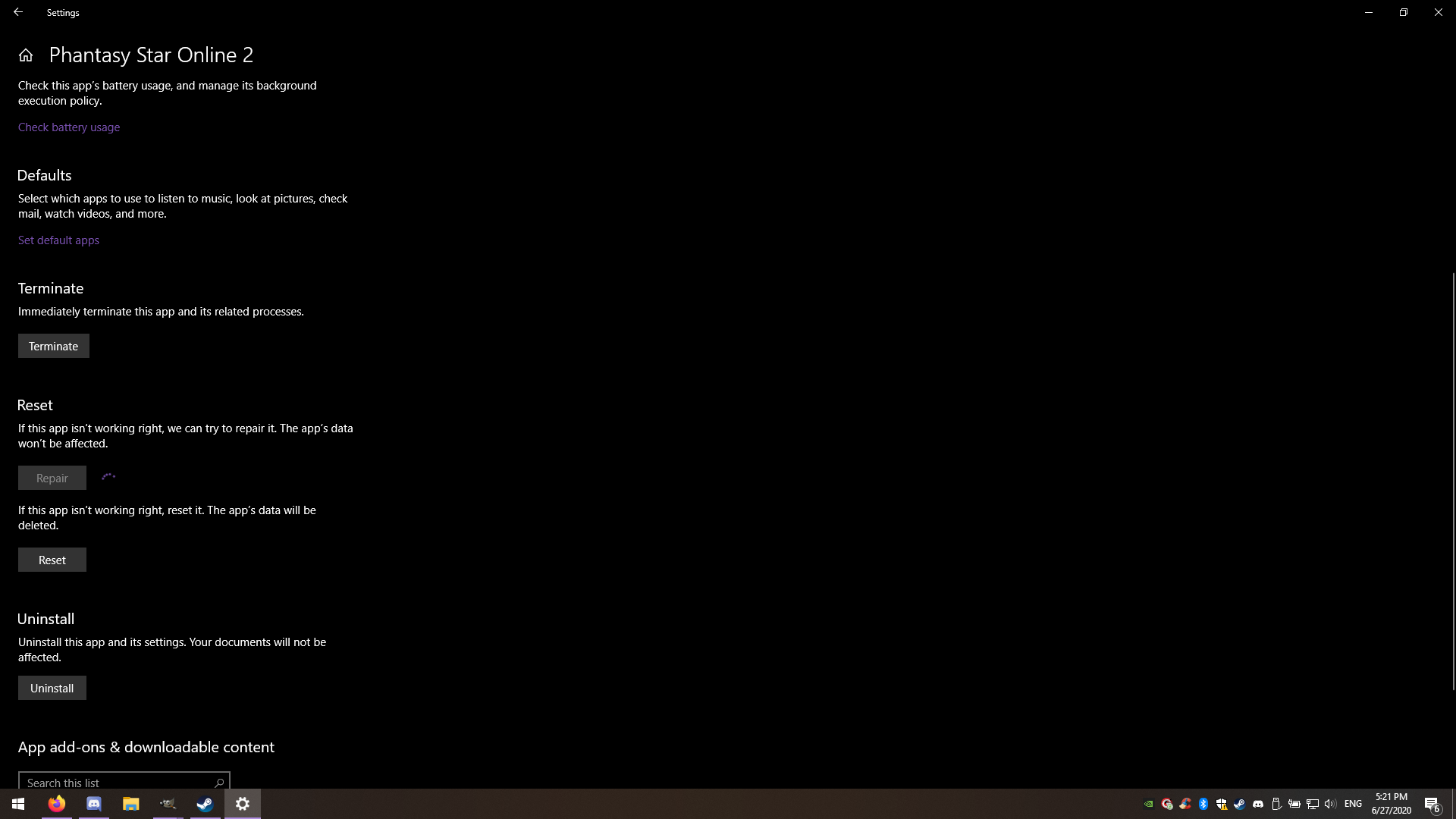 It's been loading/repairing for the past 5-10 minutes with no end in sight. Clicking Terminate does nothing since it cannot be running with no EXE File in the first place.

Clicking Reset also infinitely loads/resets the app. Clicking Uninstall doesn't uninstall the app nor remove it from the programs list in the start menu, and the Windows/Microsoft Store still thinks the app is installed.

No, Windows Defender does not have any of PSO2's files locked up in quarantine/etc.

Unfortunately you've been stuck with the bug effecting everyone sooner or later that quite honestly, 90% of the tech support posts here are somehow related to. MS and Sega really need to get their crap together, I've already reinstalled the game twice now, and the third I think is almost here. Windows wants to update again and that has a tendency to make it break things with the store. But yeah, I don't think they seem to understand how huge a deal this is, people will start leaving the game in droves over this sooner or later.

But yeah, the bar under the icon is the updating bar for MS store apps. When the MS Store inevitably breaks PSO2 it will sometimes show that there. Once it's broken the only way I've seen to fix it is to uninstall it and reinstall it. There's really no point in trying to get the store to fix it. If this was a game normally handled by the store that might be fine, but rule of thumb for any MMO with it's own launcher (which is 99.9% of them) is don't ever use an outside store's Repair on it, it'll just end up breaking it worse, since it will try to restore it to the state it was originally in from the store.

I never managed to get my attempt at repairing without doing the uninstall to ever finish, the game has so many blasted files it'd probably take a half century to check them all. I knew of the golden rule above, but it was mostly a desperation move at not wanting to fully reinstall all that, but I think it's still faster to just wipe it all and start over unfortunately.

Though, I do question what exactly is in the base game package the MS store has anyway. Because the game is something around 90ish gig, and the MS store only installs 11gb, so as far as it's concerned that 'is' the game. I could understand, if that was a base 2013 PSO2 copy, but bit weird since the NA build has never had a 2013 version. Hell, right now, a repair down to the first PC build wouldn't be so bad, if it was actually complete, but it's no where near that.

Anyway the obnoxious fix to this is:

A) Uninstall the game

Warning: Be careful and don't screw anything up in here or you could really wreck things related to the MS store/Windows

B) Gain access to \WindowsApps on whatever drive the game's on, go to MutableBackup, open it, find any directory there with "oxyna" in the name and remove it. (This is the left over data the uninstalls always leave behind whether you're reinstalling or not, not sure what Ms was thinking in this) Personally, I've usually got a few files that refuse to delete but they're 0 bytes anyway, at least... Note however, that this is a secured directory, you can't access it under normal means, you'll either have to tamper with permissions, which I do not recommend, or take the simpler and cleaner method which is: Open/Install 7Zip, run 7Zip File Manager as administrator, now you can get in here without having to alter permissions, this drastically lowers the chance of breaking something. Note that 7Zip might move these 'deleted' files to the recycle bin so you may have to dump it later, which could take a while.

C) Reinstall the game via the Windows Store.... again.