"Player limit for this quest has been reached" error

Being a solo player I rely heavily on the AI partner feature. Well, every now and then I'll have an error pop up saying I can't "invite" another AI to my team because it's "full." A full team is 4 (myself and 3 others, whether AI or players). I've had it pop up after inviting two AI, I just had it pop up after inviting only one, and it does this for both NPCs and "Free Players." I've also had it refuse to bring an NPC in because "This partner is in use by another character."

Sometimes I can get around this by "booting" all the NPCs, sometimes by leaving the "gate ship" and goign back to the main lobby. But not always. And it's really annoying and time-consuming having to fiddle around trying to get it to work again.

@zaffy2005 So the reason why this is happening is because of multi parties. Similar to UQ, the multi party is set to 12. If you join a random quest without making it a private quest, randoms can are joined in the same world with you. So if you are at a max party size of 10, it will count you as 11 and a aux/support ai as 12. If they are also running AI, then you can't have the same ai on the field as they do in chance you run into them.

To avoid this set the quest to private.

@ERICK001BC Yet when I finally get the quest to launch there's literally nobody else there, let along 10+ other people, NPCs or otherwise.

@zaffy2005 You checked the top part of the player screen where it tells you the party number? I do a lot of solo play when fishing/Harvesting and I was having the same issue and noticed that the field showed as other players on there (also was trying to level up support with characters for the titles). If it happens again just check the party icon, but I would make quest parties as private, and disable multi parties.

@ERICK001BC Can't really see the edges of my screen (TV doesn't have any settings to adjust scan/aspect ratio) but I was going for Daybreak Province to harvest for the Tier mission and when I got there (after trying to pick a party, booting the one NPC it let me pick, leaving the Gate Ship, restarting the quest and getting to pick a full team) there was no one on the field. No numbers in the distance, no little dots on the map. When I was nearing the exit someone else finally showed up. Otherwise I was the only one there the whole time.

Other players still count toward the instance total even if they are in a different Area of the same Quest, so anyone who is in the boss arena of an Expedition will still count to the total.

@zaffy2005 It counts the whole map server. It could be that when you loaded in they where in the second area or the boss area. It is really stupid that way. Another way to check if you are not alone is when going in through the gateway portal it will ask you if you want to spawn where other players are.

@ERICK001BC Didn't ask if I wanted to join other players. And I don't even know how to set explorations as "private."

@zaffy2005 I am not in front of my game atm, but when you go to load a quest from the counter, you go to party settings and change multi party options. Also when accepting a quest where it ask you if you want to leave it for recruiting active joining) you can go over to the middle section and make it password only or friends/alliance members.

@ERICK001BC I know there's check boxes for Friends or Alliance Only, but nothing about party/muti-party, unless that's a different menu/page.

@zaffy2005 The tick boxes to block other parties should be directly beneath the password field. I'll grab a screenshot in a second.

EDIT: You type in your password, then click the highlighted option (Also Limit Multiplayer Requests from Other Parties) and it makes it into a private instance: 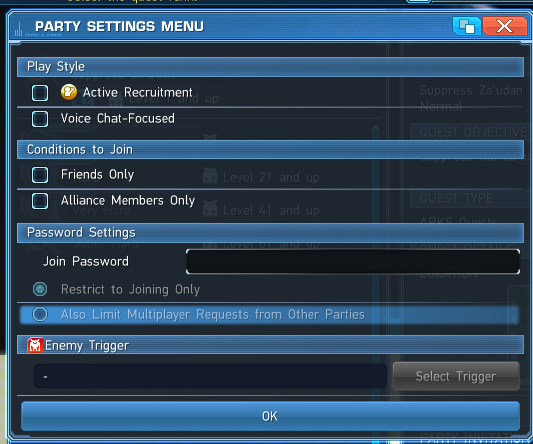 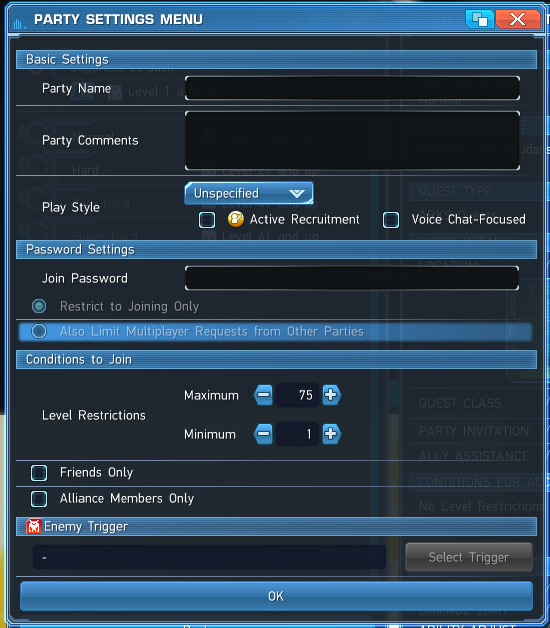 @AndrlCh Ok. I saw it grayed out and just assume it was only available as an option on certain quests. Didn't realize you had to set a password first.

@zaffy2005 Yep, once you do it is your own private server and you should be fine with solo play. (Unless you want friends/alliance players or people who can guess your pw.)