Guide: Gearing up Mini-Guide for newer players (with explanations)

You pretty much have the 2nd best option after Nemesis / Slave as i see it. That should be sufficient anyways, the only reason to get an upgrade is if you care about maxing out your gear before it's going to be outdated in 2 months. In terms of damage it lacks about 200 R-ATK behind which is rather signifcant, but by far not a mandatory thing, especially considering most of the high-end gear options in this game are pretty much overkill for the content they are meant for, depending on what you are doing of course.

We don't have many sidegrade options at the moment so it's rather linear.

Thank you for this guide.

thanks for the guide!

Added the Magatsuhi to the list of units, not a big difference to P-Drive, but a neat alternative which should be cheap. This guide should now be rather accurate, till EP4 hits.

Also i can't stress this enough, don't bother with Saiki please. For some reason it gets even more expensive on Ship 1 as time passes and i have no clue why.

Short bump for FREEDOM update, Saiki potentially dropping in price as triggers are now to be obtained in the Casino and Iceman appears in the FREEDOM UQ.

Also the new UQ drops a bunch of badges (around 15-20) per run replacing Wind and Rain for the Badge grind to obtain Ray Units. The Glory Badges can be exchanged for Rising 2 Badges 1:1. (quest has anga in it aswell, unknown if it drops Nemesis / Slave / Ray)

If you can't wait and want more Badges, UQ triggers are available in the Fresh Finds too.

Weapon Progression remains unchanged, the 13* series from the UQ is a lot weaker than Nemesis or Slave and their potential is only useful in a few fringe cases.

CMode has x5 Soul Receptor and a new good Allrounder Soul, for those who look for a cheap Affix and don't want to make an effort and get SAF's.

Finally getting to look at this seriously, crazy useful! Especially the parts about hidden stats and those eventually becoming more prominent and versatile than set bonuses.

Looking at the chart provided, the Ray unit set says it gives +75 to each Pwr stat and no DEX, but looking at the units Nonon offers, each piece offers +40 to all Pwrs and +15 DEX for +45 total. Am I misreading something?

The Ray Set gives 25 ATK on each piece, totalling up to 75 if you equip the entire set, no DEX.

The Brissa Set gives 0 ATK on each piece, but if you equip all 3 you get the Set Bonus, totalling to 70 ATK and 50 Dex.

This is a bit confusing to read on the na Visiphone which is why i made a list only adding up the exact totals you would get. The idea behind this change is, that SEGA wanted to go away from providing Set Bonuses and instead allow players to mix and match different units. If you wanted to swap one Brissa part for something else, you would lose the entire Set bonus, but if you want to swap one Ray Piece you would only lose those 25 ATK (and all the other bonuses on that unit) for a different unit with their own hidden bonuses.

Even reading this now, it's a bit hard to comprehend if you haven't been there before the change, i recommend personally for new players to forget about Set Bonuses as they are a deprecated system, they are almost never used again by the time 12* Units were exclusively distributed.

@Macmaxi said in Guide: Gearing up Mini-Guide for newer players (with explanations):

The Ray Set gives 25 ATK on each piece, totalling up to 75 if you equip the entire set, no DEX.

That really is not what I'm seeing in the game though!

This quite clearly says 40 to each of the Pwr stats and 15 DEX. It also shows this as the stat change when equipping it to replace an empty slot:

At +10 the arms are also giving 330 which if matched by the others is still greater than the chart says as it would be 990 total instead of 945.

This is only happening with Circaray, from what I can see. I've looked at the stats of other units like Brissa+10 and individually they do match the chart once you remove the set bonus.

So again, am I missing something or is it possible that the NA Ray stats are just higher?

@WillfulChart930 said in Guide: Gearing up Mini-Guide for newer players (with explanations):

I'll just ignore this, considering you contradict yourself. If you only care about the ATK stat on Units, then it wouldn't make a big difference for you that much is true.

@Miraglyth The ingame menus incorporate the affix bonus into the shown stats, so to see the "raw" unit bonuses they would have to be x0 on affixes, which conveniently i have lying around. 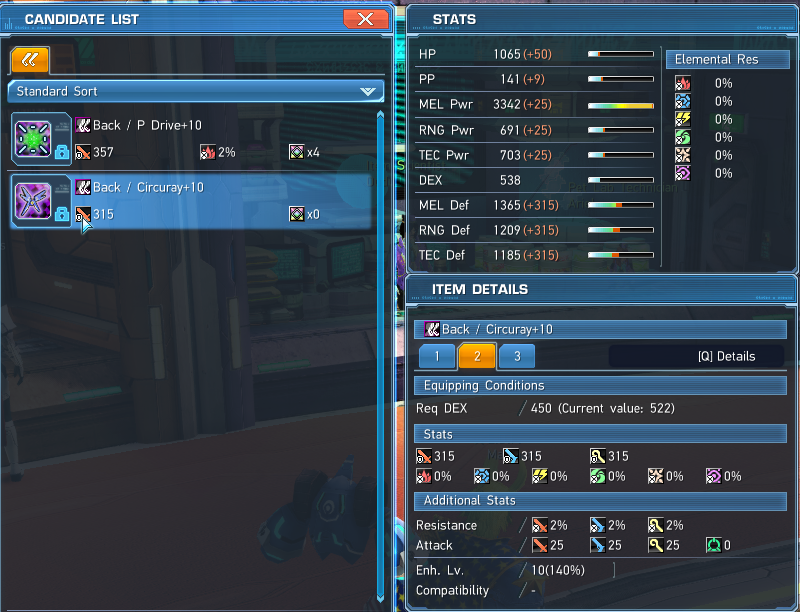 @WillfulChart930 said in Guide: Gearing up Mini-Guide for newer players (with explanations):

you forgot about affix stats

Oh! They're included in the tab 2 display. Of course. So I was missing something after all. Thanks!

Yes, that makes the set line up with the chart now. And those default augments are really quite a capable starting point.

So with one look to the future, I hear the Ray set gets upgraded to the 13* unit set of choice and also that 12* and above units can have L rings slotted into them. Does this mean it would be worth our time to get ourselves a few extra Circaray unit sets for different rings or can you take rings back out of units after slotting them so the same units can be reused?

@WillfulChart930 Man,if you have 3 characters and do the 3 blacknyak giving you 30 badges for 7 days you'll have 630 rising weapon badges 2.. Its litterally a few minutes of play each day.

The Ray Set can be upgraded to the Union Set, which i listed in the first post aswell, it's a 12* Set with moderately increased stats over Ray. It's not a high-end set as other 12* Sets will replace them later, but since it's the only 12* Set available now, its the most "futureproof" as you were rightly pointing out, players are able to put L-Rings into them. If we get the most recent ring system, then you copy the ring into the unit and don't lose that ring, which means you can freely switch depending on what you need. If you play more classes you might get different sets (maybe with different affixes too), or you just put general rings in there that fit generally, and use the 4th slot for a class based one. (Unless you need more than 1 class ring).

The usefulness of multiple Ray Sets depend on what classes and how many you play, but there will be plenty of 12* units around to experiment with, there might even be a better one coming out in August already.

@WillfulChart930 Sure, that's up to you, personally i got spare Ray Units lying around and nothing to spend badges on anyways.