Please, its really sad that the fan patch for the JP servers did the translation better. this isn't the work of proffessionals, one has to question whether the ones doing the localization even were native english speakers- or even fluent english speakers.

I hope we can expect the many, many errors to be corrected soon.

While I wouldn't say it needs a full re-do, I do feel that they need to do another pass, not just for consistency, but also for better clarification with varied word choice. For example, the overuse of "subdue" between Client Orders and the names of some ARKS Quests has lead to some new players thinking they are missing a Quest, or the use of "Swap" for Skill Tree transfers making the intention of the option unclear.

This. I want my flavor texts. JP has a lot more details on their item descriptions.

Yes, I want things redone. Mainly just give Risa her proper name back of "Lisa". You can't do that to best girl.

Everyone likely knows this famous one on issues but I cant be the only one annoyed at how the text is formatted for half of what the operators say, I dont have a pic right now but I know I've seen line breaks for a single period. No time for proof reading and making it look nice formatted? Same to how prefixes for enemy names thetextisalltogetherwithoutspaces because thats how it is formatted in Japanese. Its not really important but this sort of thing looks really ugly and unprofessional.

Explain what this does.

@Temuorin Honestly, I personally prefer the Risa romanization since it means "laughter" in Spanish, and we all know how she loves to laugh.

I mean FFXIV has one noticeable mistake per 30-60 hours of gameplay, its a little different situation here. TBH reading the text I cant believe this is the work of proffessional translators. I think it was rushed. Hopefully it'll be corrected soon enough.

At least we have some good memes now. Gods Be, operative!

While 're-doing' the entire localization is not necessary by any means, I would like to throw my vote in for another comb through to spruce it up!

For an official release, it is very disappointing to see so many grammar errors and inconsistencies, and they are not that as few or in-between as people believe. It leads one to think that this was rushed out without a second thought to proofreading. It doesn't inspire much confidence in someone like me who was very excited to play the game to see all the unique/different translation approaches to everything--especially when flavour text has been axed almost entirely! Please reconsider that decision as well!

There are scaling issues as well with the UI, which is not exactly in line with the translation needing to be touched up, but it should be brought up I think. There was an e-trial with text so small I struggled to read it (unfortunately I can't remember which one off the top of my head) and there are many instances of text being cut off entirely. There's much and more to mention, but this gives a good idea, I believe. Thank you for reading and thank you for your work. I hope it will be considered and we'll see a fully polished PSO2 NA in the future!

Some image proof that I managed to have on hand:

Imagine if they just changed "Meseta" to "Your Money". I'd have a good laugh.

Alright, another chance to talk about the localization! This is going to get long...

Here are my thoughts and feelings on the localization:

1 - I'm pretty sure some of the localization team are not native English speakers. There are a lot of grammatical errors that most native speakers would not make if they were working in a professional capacity (such as localizing a game). On top that, there is some choice of wording that seems kind of off. Things that make sense grammatically, but just seem... odd. For Example:

There's nothing wrong with what this says, but who talks like this?

2 - It definitely seems like the localization was done by separate teams which had little to no communication with each other concerning their respective assignments. This has lead to places where sometimes the same thing can be referred to differently depending on where you look.

Examples of this include such things as: 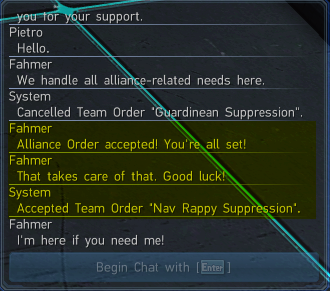 For those unaware, in the Japanese version, Alliances are referred to as Teams. Here we see that while the NPC is referring to this Alliance Order properly, the system message refers to them as Team Orders. 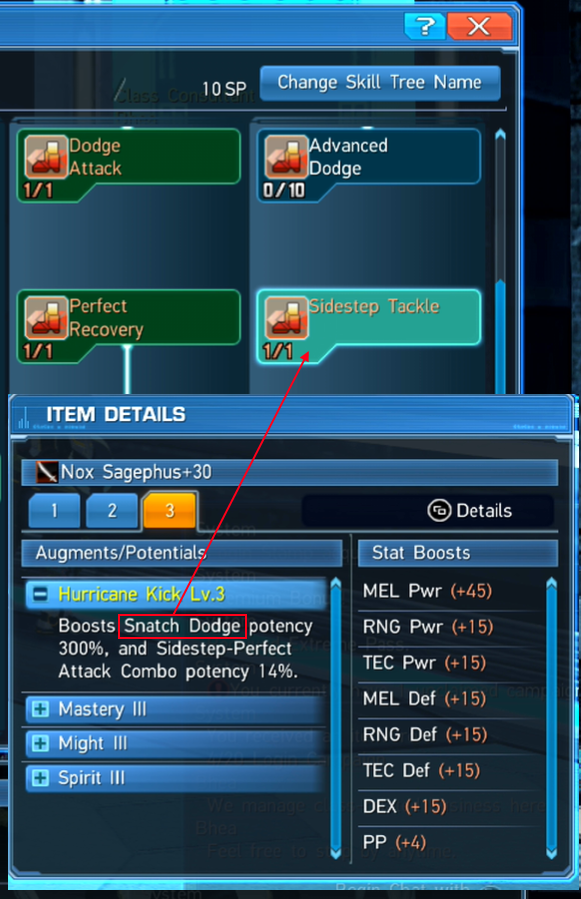 Here we're looking at the Hurricane Kick potential for the Nox Sagephus Katana. In it, we see that the potency of Snatch Dodge is boosted by 300%. What is Snatch Dodge though? You would have no way of knowing this unless you were familiar with the Japanese Braver skill tree, but the skill they're referring to is called Sidestep Tackle in the English localization. For some reason, it's been translated as Snatch Dodge for the description for Hurricane Kick.

A third example that comes to mind, that I unfortunately don't have an image to share is from the Urban Lifestyle AC scratch. There was an emote called Wall Slam included as one of the potential pulls. The item is called Wall Slam in your inventory, but when you consumed the item and attempt to go use it from the emote list, you'll find the emote is now called Kabedon.

3 - This kind of ties in with my second point above, but it seems like there was no style guide for this localization. From what I know of localization, there's typically a style guide or something similar that the whole team would use as reference so when there's a question as to how to translate something, you would follow the guide. From what I've see, it seems there's no method to the madness that is the NA localization.

4 - My personal feeling is that there was no thought put into some of the translation choices. By that, I mean that everything is translated without thinking about context or intent, and in some cases they just flat out changed things that I suppose they couldn't find a proper translation for. There are many instances where transliteration, rather than translation would have been more appropriate. The biggest example here are the Photon Arts...

For those unfamiliar with Japanese, there are three main scripts used for writing. Among them is one called Katakana. Katakana is used for several things, but among them is the transliteration of foreign words. In the Japanese version of PSO2, all of the photon arts are written in Katakana, because almost every one of the game's Photon Arts are foreign words. Mostly English, but some other languages too. You would think then, that since the PAs are already mostly foreign words, that they're like that for a reason, and the localization team would simply transliterate them back to their appropriate languages... but they kind of don't do that.

The example I often use is that the Gunblade PA Rage Dance is written as レイジダンス in Katakana, and would phonetically be pronounced Reijidansu. That's a pretty simple transliteration job there. Reijidansu = Rage Dance, and that's what we got. However, there is a Gunblade PA that's referred to as Rayblade Shot in the NA version, but in Japanese, it is written in Katakana as エインラケーテン, and phonetically would be pronounced Einlaketen. Now, you may be thinking "There's no way that's an English word." and you'd be totally right. It's German. Ein Raketen is what it says. We didn't get Ein Raketen though, we got Rayblade Shot for some reason. This to me is a case where simply transliterating the name would have been sufficient rather than coming up with a completely new name for the Photon Art simply because it's in German.

And since I'll never pass up an opportunity to mention it, I would like to point out that despite nearly ALL of the Photon Arts in the game being foreign words transliterated into Katakana, the Photon Arts for the Katana, while still written in Katakana, are all Japanese words. Despite that, all of these PAs were translated, rather than transliterated.

In this case, knowing that all of the other PAs are in foreign languages, and only the Katana PAs are still in Japanese to me would mean that was an intentional choice, and were I the one localizing the Photon Arts, I would have left them as they were, rather than translating them. They also sound way cooler in Japanese.

You could argue that they wanted to translate ALL of the Japanese in the game to English, but I would simply say that isn't true at all, since there are Katanas like Yasha and Yamigarasu which are still in Japanese, plus you have the Kabedon emote I mentioned before, and of course we can't forget the all mighty Fluorescent Bulb... or should I say... 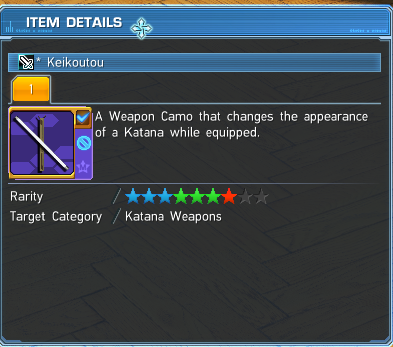 Okay that's all I have to say about that.

The game really does need an additional look over by an editor at the very least. I have been making threads in the bug report section of the forums for the typos and gibberish text I have found, but I could have sworn there was a way to submit bug tickets at one point, but I can't find hide no hair it.