Add something useful for the casino prizes

This topic has been deleted. Only users with topic management privileges can see it.
last edited by
P
psoslash

i hoped for the na release to balance all the stuff that the jp abandoned and to some degree they did, but when it comes to the casino this is even more useless than the jp version,

when the casino was introduced the main attraction for it were these rare enemy triggers, items that let you summon rare variant of specific bosses with increased drop rates, this was the main way to farm for the saiki set, play at the casino with your alliance and share your prize with them with a 12 people mpa raiding the rare gunne, it was awesome

these became irrelevant over time as newer gear and quests came in, when SG was introduced, you could get some at the casino, it was really expensive on CC and in my opinion wasn't worth it but you could get some

The current prize list on here is... there's nothing useful on it, just some ugly camos and lillipan outfits, maybe some lambda grinders for those just starting but thats it, i like the black rose accesory, so i'm going to farm coins for it and never come back again

i wouldn't say you should take the same path the jp server did, here are my suggestions

SG would be cool but you've made yourself clear about wanting to make SG more anchored to real money I seriously don't get why there aren't enemy triggers though, hope you don't plan to make all of them pay/sg items, they are not worth it, and they will worth a lot less over time when new content arrives since there's no SG gacha here, it would be a nice place for the low end items here (like ex meseta boost, nobody liked when they pulled that one)

It's a good thing you can get Advanced Capsules, and spend those to get loot. 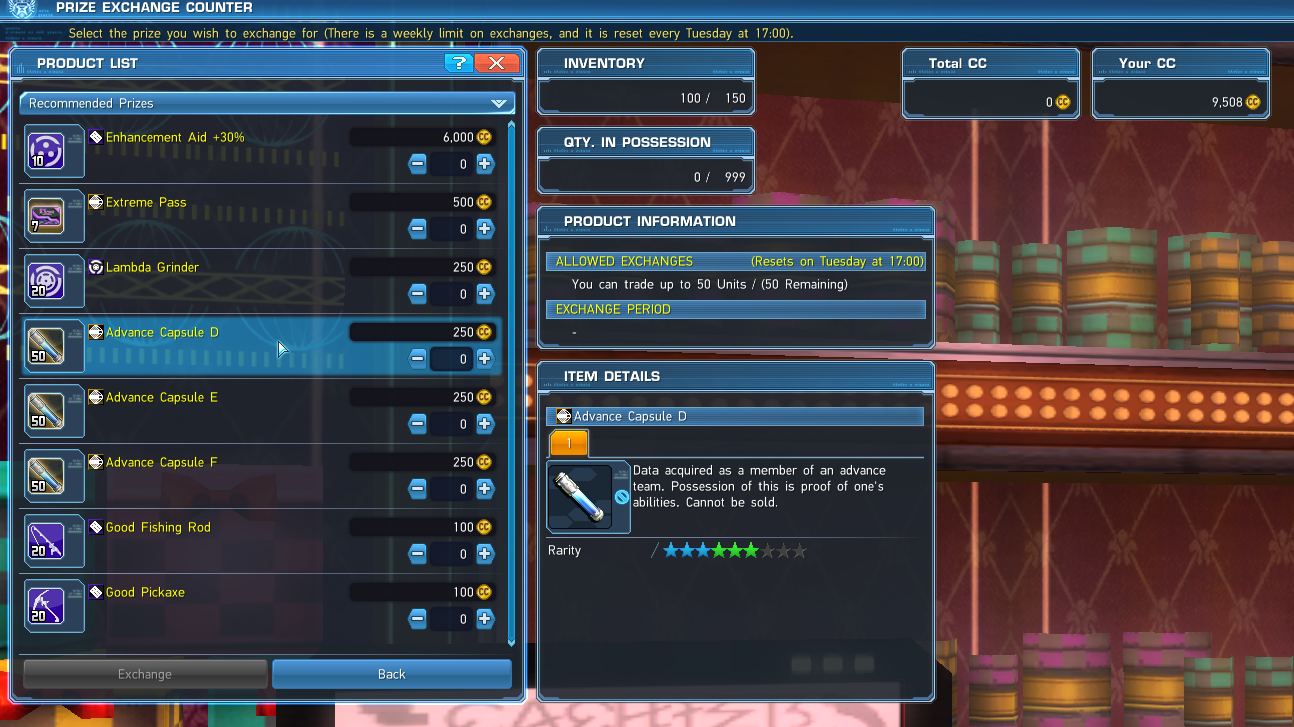 I really thought I'd get invested in the casino,I remember wasting a lot of time in the Pokemon ones. Also in more rceent memory,the Dragon Quest XI one. But this time,I'm just not feeling it. I am not interested in any of the current rewards..

a lot of time in the Pokemon ones.

In before SEGA offers 10-Star pet eggs in the casino. A-la pokemon rares.

@coldreactive That would be awesome lmfao

@coldreactive That would be awesome lmfao

At least you'd get a Redran above 8-star.

@coldreactive I NEED MY HIGHER RANKED REDRAN. HE IS MY FAVORITE

@coldreactive you can get advance capsules by doing advance quests

sure you cant do the same one over and over but doing the D E F cycle takes a lot less time than grinding the CC and nets you exp and other loot, so yeah, not worth it

I would spend more time at the Casino (currently only bother it there's a "quest" like the daily/weekly/tier sets) if there were Salon Passes and especially Color Change Passes. Personal Shop 3-day passes would be awesome, too. 10K for Salon Pass, 15k for Color Pass, 20k for 3-day Pass, you'd see a LOT more players spending time in the Casino, I guarantee it. I think the most I've ever seen in there at one time was 4 (including myself) and that was just to find the Lilipan Sticker for the Bingo Card. Nobody was actually playing anything.

Hello! Thank you for the suggestion! We will definitely forward this to the devs.

@GM-Bleed Thanks. I hope they listen.