PSO2 Ratings Have Tanked And Microsoft Store Is To Blame! But fear not! We have a solution......

I only heard rumors.

That's all they are, only rumors. No one does know the reason like I said. I remember the Arks-Layer team tried to contact SEGA to offer doing them the job for English officially and were just ignored. That is all there is to know.

@Pulptenks said in PSO2 Ratings Have Tanked And Microsoft Store Is To Blame! But fear not! We have a solution......:

I only heard rumors.

That's all they are, only rumors. No one does know the reason like I said. I remember the Arks-Layer team tried to contact SEGA to offer doing them the job for English officially and were just ignored. That is all there is to know.

Just bumping this again since Tweaker's ability to bypass MS store with the download is the only reason my friends can play.

Once again, the fan-made launcher outperforming the professionally licensed MS software on the MS operating system by lightyears.

@Neoyoshi Aready had an xbox live account. windows 10 64 bit, version 1909, latest update, newest .net update, Microsoft Store preloaded permanently on system, and up to date (Indeed, the laptop was recently purchased, and thus I spent a good two days going through all the updates, until there wasn't a single one in need. I made sure to meet all the requirements, and in fact, bought the laptop, specifically so I could play PSO2, as I'd been waiting for its NA release for a long time), xbox companion imnstalled, MSI GS75 Stealth Gaming laptop, 9th gen i7 intel, all system requirements excede minimum, and recommended for the game. Xfinity/comcast internet provider with High speed internet, living in North America, East coast. Double checked all updates the day before release, installed on C drive, by default, let Windows Store handle all the install locations, no 3d party download managers or game launchers, in fact, the game installed and worked fine the first day. I played it for about 8 hours. Then went to bed. Next day restarted my computer, and the game wouldn't start. Clicking on the shortcut, the start menu tile, tried launching it from windows store, wouldn't start it. Then saw it was reinstalling. Waited for it to finish reinstalling. Played again. Game plays perfectly, love the game. I let my laptop restart the next day. Same problem as before, then I realize I've lost over a hundred extra gigs of hard drive space on top of the actually game itself. I can't figure out what happened. I figure maybe there's an update for windows itself running in the background, waiting for a restart to finish installing. I restart, hoping that fixes things, and now the game installs again. I opened system app, and attempted to repair the game in case it had been corrupted somehow. Nothing happens. I attempt to uninstall it. Nothing happens. I try uninstalling it with the pso2 uninstall, nothing happens. I try to stop the install, can't. Games still stuck in download loop filling my hard drive. I remove the game program itself from the un-hidden modifiablewindowsapps directory, which prompts a correct re-install (the game icon actually shows itself as in the process of installing. It hadn't before). After this reinstall (which still eats up extra hard drive space, beyond the game itself), I'm able to uninstall the game. I uninstall the game. Game files are gone. Game is gone, all the downloaded game install files in the hidden folder however remained. The uninstall didn't remove any of the multiple copies of installation files for pso2. Next to no hard drive space remaining. Go online, and learn how to access the hidden folder, and remove the install files manually, since the Windows Store has no option to uninstall the game or the installation files, available. I remove the files, and only those files. My computer has it's hard drive space back. I'm now waiting for a solid consensus that the problem is fixed before trying to install the game again. Wish I had a problem free experience like yours. Being able to play it for two days and truly enjoy the game, having to remove it in order to save my computer, doesn't really make me happy. I want to get back into the game, but I'm patient enough to wait until it's safe.

I'd be willing to bet cash money on it not hitting steam. Microsoft seems to have thrown their lot in with epic games to try and cut steam out of the PC market. Look at how many recent releases are hitting EGS and Microsoft - but leave steam out in the cold. They're doing their best to blackball the only PC platform that isn't complete garbage, instead of giving people actual reasons to want to use theirs.

@CNJL said in PSO2 Ratings Have Tanked And Microsoft Store Is To Blame! But fear not! We have a solution......:

Just bumping this again since Tweaker's ability to bypass MS store with the download is the only reason my friends can play.

Once again, the fan-made launcher outperforming the professionally licensed MS software on the MS operating system by lightyears.

Aida is truly our hero lol.

By the way if you are on Ship 02 my alliance is recruiting! Just add Zarozian8175 on the Xbox thing to make it easier for me to invite you guys.

I am praying it comes to Steam. For me, even with tweaker, the MS app stops me from playing no matter what i do

Everyday it wants to reinstall the game, why? Also instead of it scanning the folder it has already made and repairing, it deletes everything and starts over.

It's such a shame and feel bad for the SEGA team. So many lost players due to Microsoft's mess up. Ill give it one more go, but won't hold my breath.

at this point they made me wait so long to be able to play on an NA server im very disheartened and dont care if they ever fix it at this point. i was having so much fun until my game suddenly shit out on me. enjoy your time playing while it lasts and dont spend any money just because its running for you right now

Aida is truly our hero lol.

True this. But let's not forget everyone who helped out giving tips / fix and tested out Tweaker. But yes. gloery to our blondie!

They're *** flying space ninja butterflies with guns, get it right Tenno!

On the front page again: 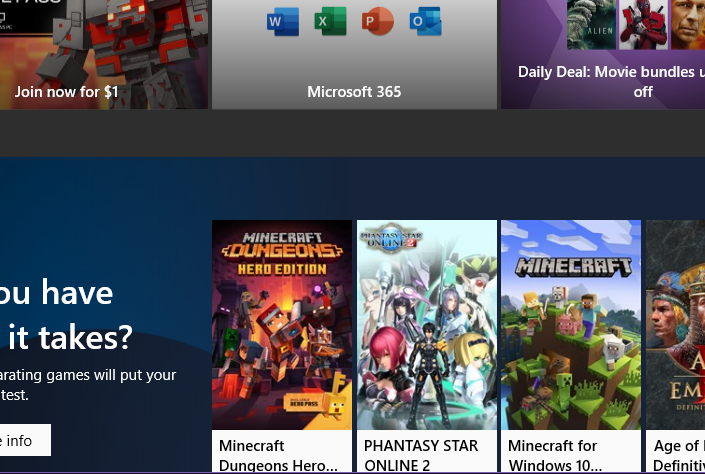 @Neoyoshi said in PSO2 Ratings Have Tanked And Microsoft Store Is To Blame! But fear not! We have a solution......:

I have to be honest, because i'm often feeling like that lone PC-user on a island by myself; but i really have to ask:

"What in the world did all of the other PC users that are having major issues do differently?"

Did i not have any issues because i already had a Microsoft account linked to the Xbox-play anywhere system? Is it because i'm on a old Hotmail email account from 1999? That last part is just me being silly. xD

But i do have this mental list going on in the back on my brain when i see the topic of PC-users running into issues with this game and it's relation to the microsoft store.

Before i even thought about pre-downloading on that early morning of the 26th (which really may as well been the 27th)- i updated everything; i made sure all my microsoft plugins and apps on the app store were fully up to date; i double-checked to make sure i my Windows didn't have any lose updates i had forgotten about or hidden away.

Most importantly, and maybe this is just me being paranoid or not trusting my own judgment, but i made absolutely sure NOT to install the launcher onto any other drive outside of the standard C:\ drive.

Also i did not use any type of 3rd party download managers or accelerators; which i know some advanced PC users like to use but i've never had good experiences with in the past.

I actually didn't have to do any of that, I used the MS-store to download it, then used the tweaker, I'm not from NA, and it works just fine for me too, if anything, the fact it's not working for a lot of other people that are doing things the right way implies that PC is so vastly different between units, that they're all pretty much on a spectrum of differences, just like people that are autistic ... if you've met one autistic person, you've met one autistic person, what applies to one, may not apply to another.

There could be any number of reasons as to why it doesn't work for some people, and the MS-Store isn't making this easy for anyone to figure out why.

@TrueSocialFox So basically i got an autistic PC then, because everything seemed to show that it should work right away but i still got launcher errors lol, but only those.

@Dracoco1214 said in PSO2 Ratings Have Tanked And Microsoft Store Is To Blame! But fear not! We have a solution......:

@TrueSocialFox So basically i got an autistic PC then, because everything seemed to show that it should work right away but i still got launcher errors lol, but only those.

That was an analogy, all PC units are pretty much autistic, they differ ever so slightly even if using the exact same components, even if you image the OS on all of them, people will have slightly different settings that can or can't affect stuff you do on it, the launcher could be erroring out because your router is blocking a specific port, or your connection is dropping packets, etc, so it's not limited to your PC.

Heck ... VSee app, crashes when running in sandboxie if the game is running, it doesn't give a warning, it just force-closes for no reason.

What I'm not getting here is: Why didn't they launch the cloud version in the US. With everyone going ham on "streaming for games", you'd think Microsoft would throw the weight of Azure & XBOX Cloud Services to bring the "lightweight" client to North America.

(For those not in the know, there is a "cloud" client in Japan, that streams assets and video to the client, and is not only on Windows, but Nintendo Switch, and mobile devices as well. It's designed for those with less than the already ridiculous minimum 67GB required by the JP version {which is being blasted out of the water by the NA's unofficial plus 100GB req.}, and purportedly runs in just 100MB of storage space)

The cloud version would surely have sidestepped 90% of install issues (as the cloud version doesn't have to download 80GB+ of assets, and it is designed for less graphically capable machines, despite having a higher CPU req. {for video decoding most likely}), and could have saved reviews of the game.