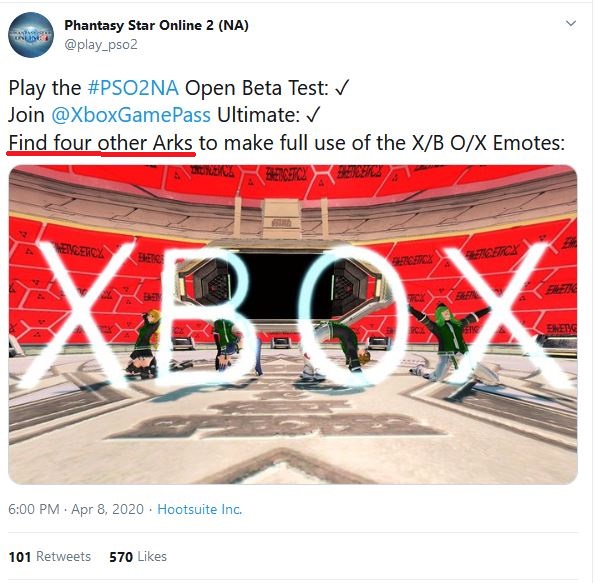 I know Math is difficult and all but...

Why would one player need to find four other Arks to compose a 4 letter word such as X B O X?

So you need to find three other players, not four.

P.S: Also, are you 100% sure that this kind of Tweet is what is needed when you have a PC community that is clearly everytime angrier and incensed and are already bashing your social media as is ?

@IfrianMMO one is to take the picture.

And yes, they can still tweet things for the community that is currently playing.

I mean, they can put the interns from marketing to make the tweets while the programmers take care of the PC version. And pray that it's not the other way around.

one is to take the picture.

@coldreactive I was being facetious about someone taking the picture. >_>

I mean, they can put the interns from marketing to make the tweets while the programmers take care of the PC version. And pray that it's not the other way around.

Well the programmers are Sega Japan and the marketing is EstSoft.

And yes, they can still tweet things for the community that is currently playing.

Whether you agree and think it fair or not, it is a simple fact the PC community is pissed and outraged and that these are potential paying customers that may be lost in a game that already does not have the biggest community to begin with.

And let us not forget this is a game series that already has a precedent of XBOX being treated better and serviced for longer than PC.

So maybe, bragging about XBOX shirts and XBOX emotes at this point in time was not the greatest idea and this is a truth regardless of how you feel about the PC situation or how right or wrong you think the PC community to be.

As someone who worked in the industry, i can assure you that this was a very poor move.

....and on top of that they did not even do the math properly, which only adds ridicule to an already tense situation.

@IfrianMMO I can understand those points, but an even worst move would be to have a ghost account for the month(s) in between xbox and pc release.

The people that get offended to the point of not playing it when it releases for PC is much smaller than the potential new customer growth.

So maybe, bragging about XBOX shirts and XBOX emotes at this point in time was not the greatest idea

Again, ESTSoft had no say in the matter, Microsoft is basically running the show and Sega Japan didn't even want this in the first place. That's why it happened.

Microsoft owns windows, I highly doubt they'd just straight up neglect their own main platform that they clearly care far more about as a platform, what with the lack of true exclusives for Xbone and all the Windows/Xbox cross platform games these days. I mean Xbone's OS is just a stripped down Windows to begin with, it's literally just a Windows home entertainment machine.

There's just as much of a precedent of Microsoft neglecting Xbox these days.

I agree with Jonpaul, I think a positive active presence is good even if news isn't ready yet.

Obviously it's for the cameraman. They needs 4 bodies for such a photo

Obviously it's for the cameraman. They needs 4 bodies for such a photo

I assume this is a joke or an attempt to have a little fun about this somewhat innocuous, if poorly timed blunder?

Asking since intention is not always clear over text.

My previous comment is a joke on the text of the post (4-1=1), hence why I italicized it.