I found fashion within my wallet today >O<

I accomplished reaching level 55+ on Ship 4... Having no economy is weird, but at least encourages people to actually "play the game to get what you want", rather than "get what you want from the player shop".

Got this as a drop from battle mode. Not sure if its rare or anything but it sure is cool

Took me longer than expected (I really wasn't too productive during EP4's first three days) but I finally got to level 80 on Braver. Now to do the same for Hunter. 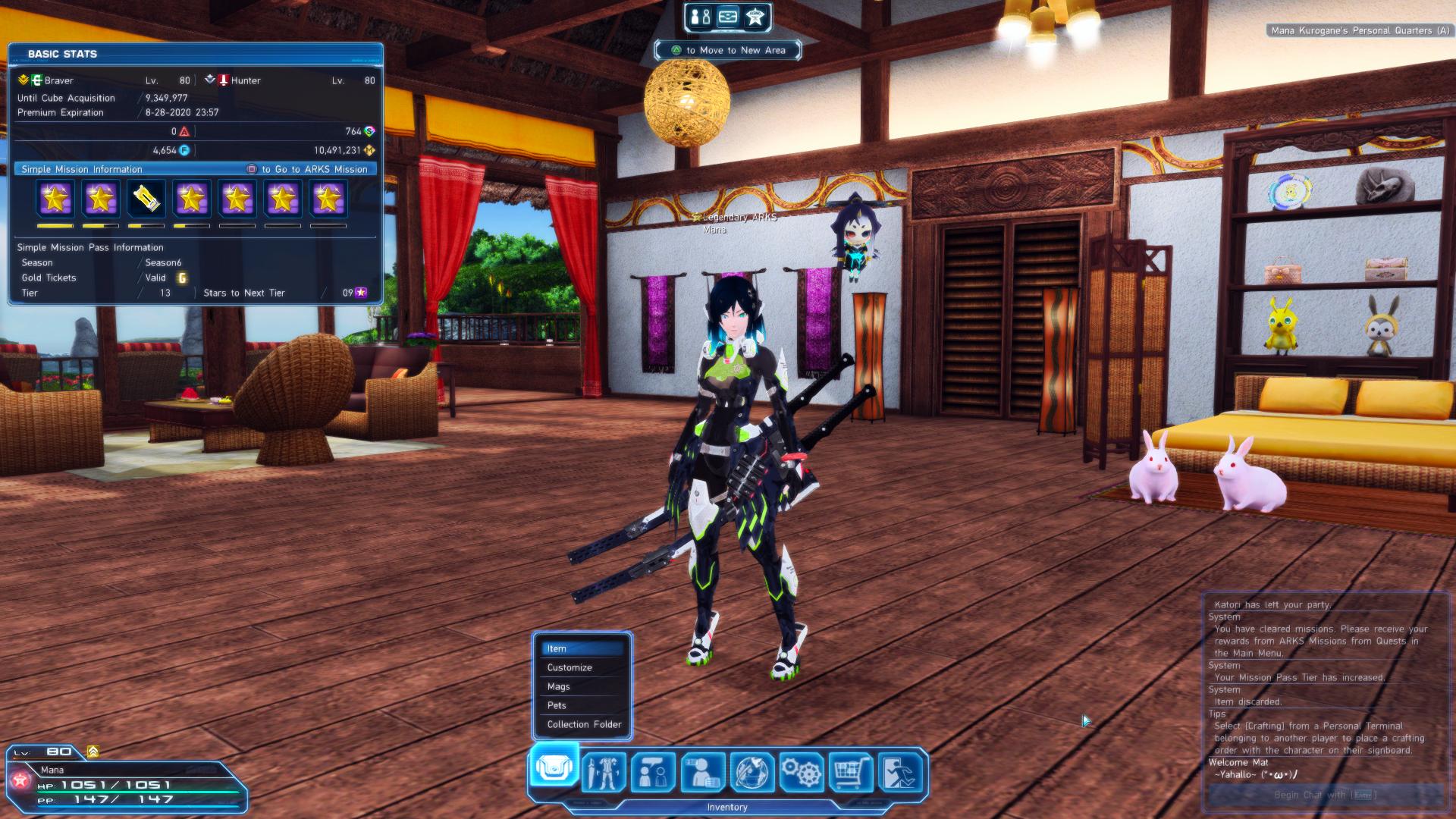 Finally used one of my 2 founders day premium passes. Does that count? lol

Finally did the thing!

Been trying for a month (or more, I don't count) to solo Mission: Decision on the full mile route (i.e. you never choose the VR option), and I finally did it today! 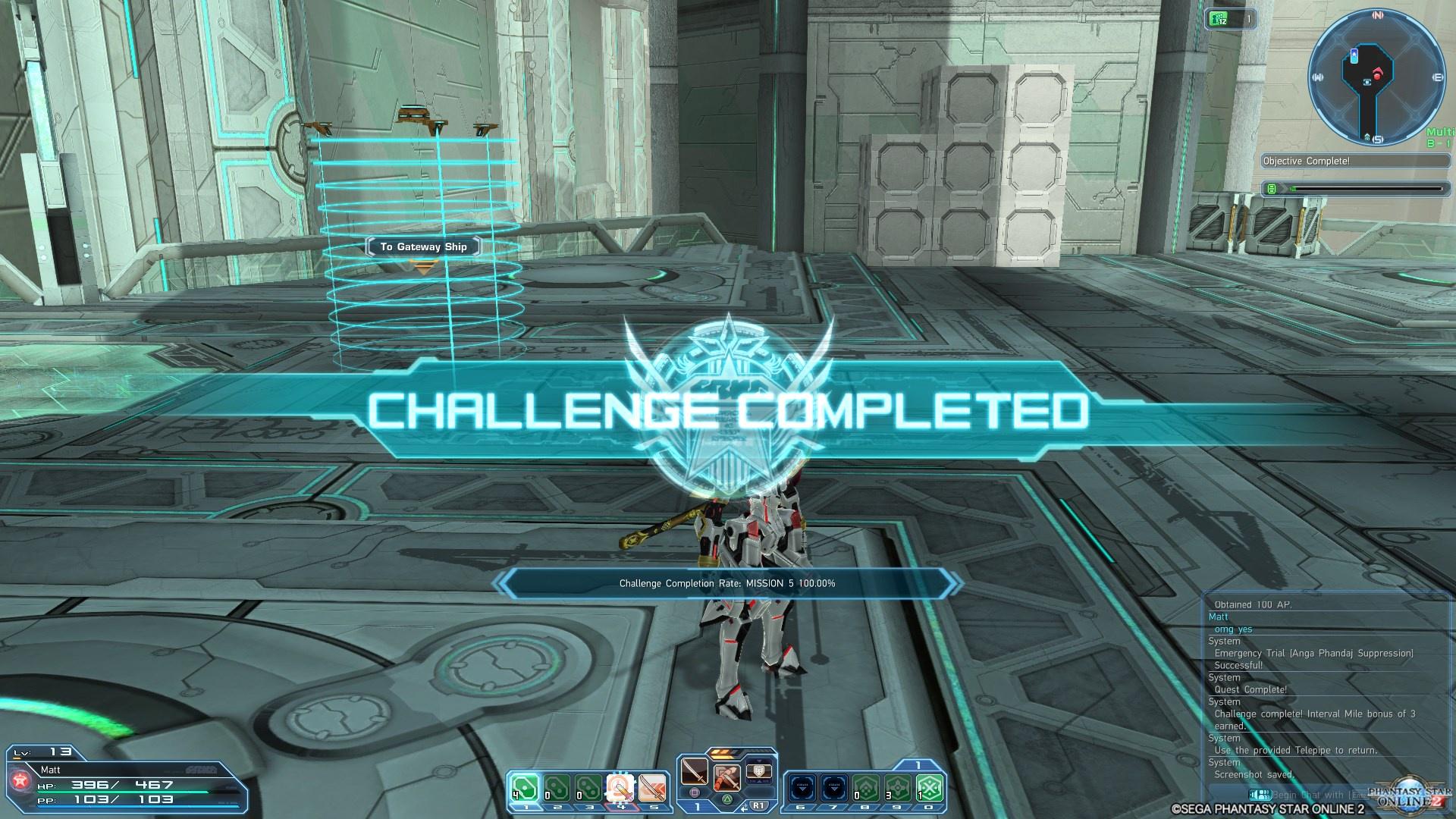 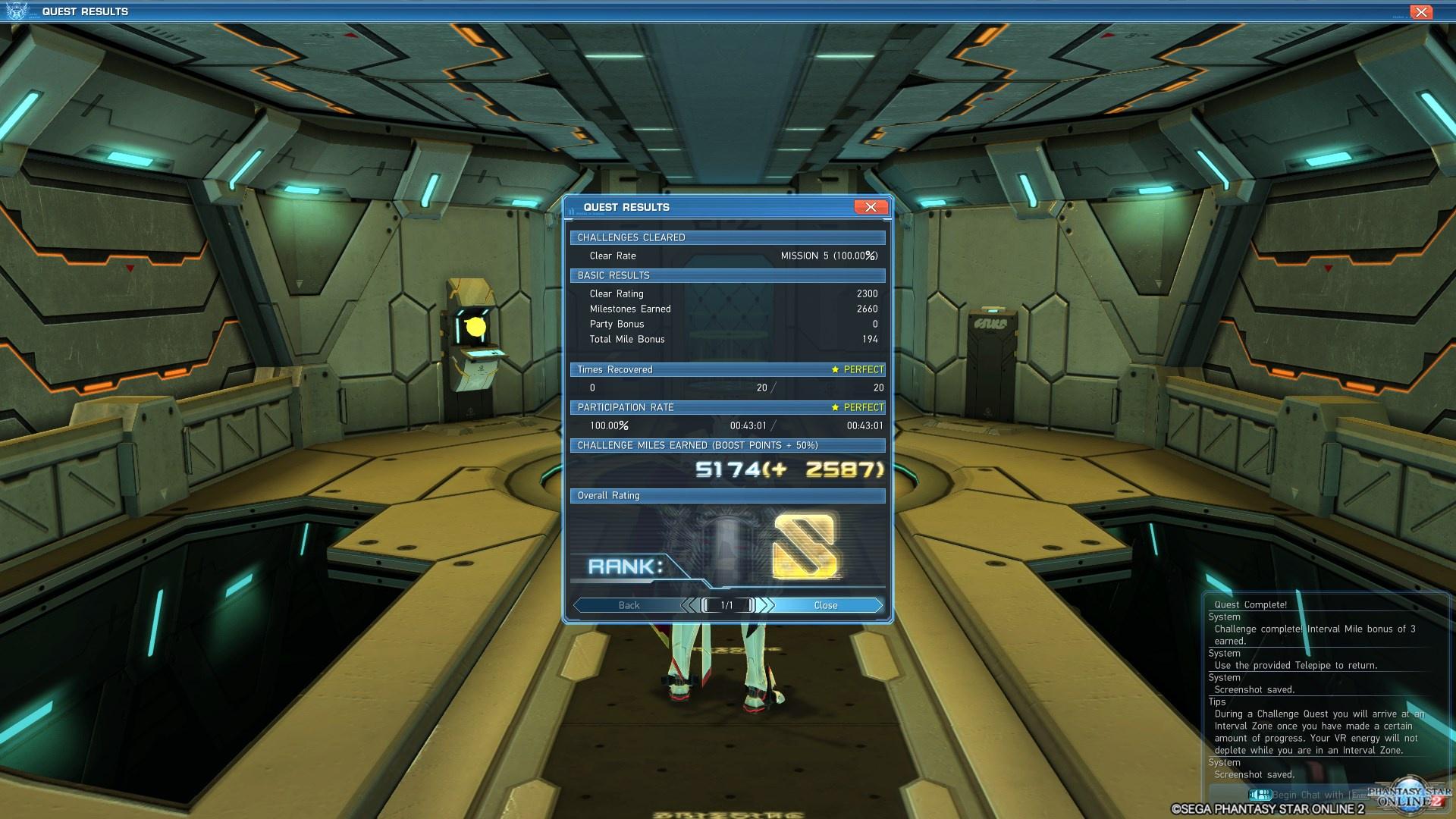 It wasn't a pro run or anything, but compared to Mission: Strike, this one is a lot harder as you're a lot more fragile and have a lot less options (plus there's almost no "cheese strats"). You also have a lot less time than Strike as VR is not quite as plentiful either, so you must keep up the pace from start to finish. Now that I've cleared both missions, it's time to relax try to get better at scoring.

Interestingly as well, I am also of the opinion that the Katana changes with Episode 4 weakened Katana overall in Decision, as the loss of constant critical rate is a massive nerf. It was really easy to keep up permanently in solo, and now M1-4 take longer with Katana. M5 seems the same though, since Sange has rare variance.

I got a Yasminokov 4000F from a ridroid quest today. The market price for it on Ship 2 is around 30 mil so ka-ching?

I have affixed a monster of an augmentation... There's only 3 other Aether Factor weapons in the (ship 1) market currently, and it's nice that Astral Soul is an easy SAF. Eventually, these can be used as fodder for Guardian Soul, though we still need Episode 5 and Episode 6 augments to release. I may end up using this... or I may just sell it in the market later; I'm lacking meseta anyways.

Coat Tailing on the other thread we are discussing affixing in -

What does Might do for you on a TEC weapon? Another one of those things that I am not understanding.

What does Might do for you on a TEC weapon? Another one of those things that I am not understanding.

Honestly, this weapon is nothing but fodder for an even grander augmentation on a weapon. There is something that I do regret not having on this weapon, and that would be Precision III, but that can be on some other fodder weapon.

If there's Might III, Casting III, and Precision III in the mix, Mastery III can be made with 60% success, which can add stats to All +15 (melee, ranged, technique, dex, mel def, rng def, tec def). There are better augments than Mastery III for better stats, but these all stack, so I could have something like "Casting III, Mastery III" on the same weapon. If I have other weapon fodder with Casting III on them, I could affix Casting IV, which is just more technique power.

The more confusing part of the weapon I made was the fact I used a SAF (Special Ability Factor) from the Ray weapon (Astral Soul) to guarantee an augment affix for that. SAF become available when you grind a weapon to +35, and most weapons have one. You can get crazy stuff like "Sentence Triple" and have it guaranteed to successfully affix.

The other confusing part, Aether Factor, was the biggest pain in the ass to affix. It requires 4 Factor Catalyst, which requires combining Mother Factor, Yamato Factor, and Deus Factor, and each time you attempt to make Factor Catalyst, it's a 10% chance at success. Sure, you can boost it by 30%, or 40%, but it doesn't really do enough. On top of the 4 Factor Catalysts, you'd also need to make 1 Aether Soul on a weapon, and this one requires combining Eastern Soul, Escarde Soul, and Fullvegas Soul, and it's another 10% chance at success. After you have all 5 pieces, it's a 60% chance at making Aether Factor.

Despite this weapon only being a fodder for something much grander, it has +100 melee power, +100 technique power, +45 HP, and +16 PP. This fodder is used to make crazy stuff that can give +200 to stats, though I'm waiting for Episode 5 and Episode 6 augments to do so. Guardian Soul is the endgoal here.

Managed to buy another collab emote off the Personal Shop. Wasn't very thrilled about the selection, but it's still nice to use.

Also realized that I can use my main PQ room as a dance stage.

Beat Profound Darkness SH with an 8 man, what a rush! I had no potions or moons left but it felt so good to beat it anywa. I don’t normally find that fight difficult so it was a fun change of pace.

My husband reached lvl60 today, once we’re 80 this is going to be amazing. We’re partners in every game so I’m excited to jump into the harder content together.