Okay... I have been loving the game.. I have sucked up that alot of things cost real money...but when I deleted my 4th slot character to remake... it wants me to buy it again? NOW that is not cool.. will this be changed in the future?

Before someone says "read before you buy" I did and nothing on it said if I delete it later I lose the slot.

@GM-Deynger tagging you, sorry. You just seem to know most of the techy stuff.

I'm not sure if it mentions it when purchasing a new character permit since I still have only made one on the NA server, but it definitely mentions this when you go to delete one: 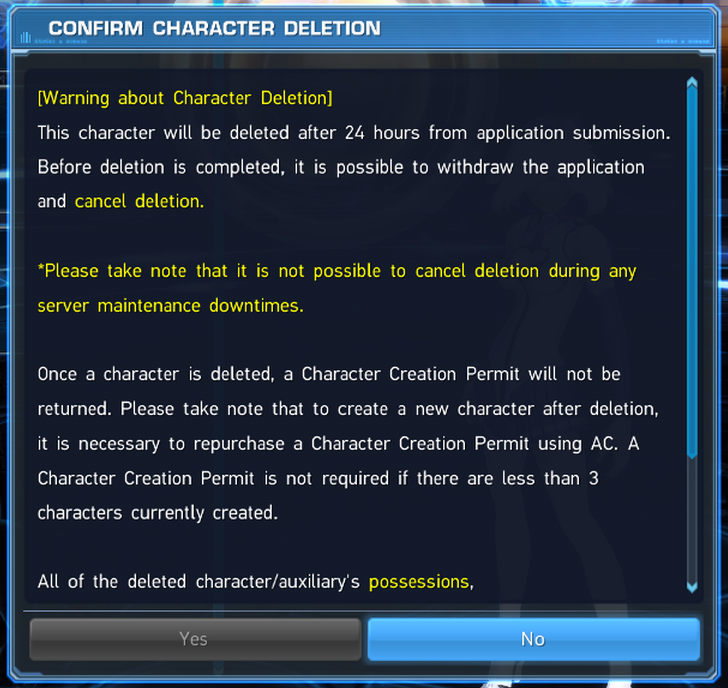 Basically you need to remember you are buying a Permit to make a new character, not buying an extra character slot.

Oh no! okay my bad >< gah I should have read the second menu.

Unlike other MMORPGs like TESO, Neverwinter, etc. Purchasing a character is actually purchasing the right to create one, not the right to have a 4th permanent character slot. This is mainly to prevent getting more daily rewards, etc.

Phantasy Star Online 2 isn't the only MMORPG to do this. Final Fantasy XIV is technically the same way, in two different parts of its features. You only get one character per world/server on FFXIV if you do their "Entry" Subscription, and only up to a certain amount of characters. While their standard subscription allows up to 8 characters per world/server with a MUCH higher character limit. If you go from standard to entry, and have more characters than allowed, you will be restricted to the last character(s) you logged into last. You will also be unable to create new characters on said worlds/servers.

In addition, their retainer system (basically their "Auxiliary" system), is limited to two free per character, and you can pay a subscription free that merges with your normal access subscription fee to have more. (1-2 USD per retainer.) Once you cancel the retainer subscription, and it runs out, the additional retainers become inaccessible (you can still remove items, but not store anything.) If you delete the additional retainer after this, and attempt to create a new one over and above your two free retainers, the game will not let you.

thanks ^^ thankfully this has been my only real issue with the game.. I bought that 4th slot to test build.. since I spent about 80USD so far on respecing. Having to buy trees and swap them with star gems.

Hello! Happy you got some closure on what the problem was.

I've said it before and I'll say it again: Maplestory does this better.