This topic has been deleted. Only users with topic management privileges can see it.
last edited by
A
A Silver King

As per PSO2 fleet, nice they finally put a stance on it. Weird way to convey it though. Hopefully this will solve the redboxing issue. 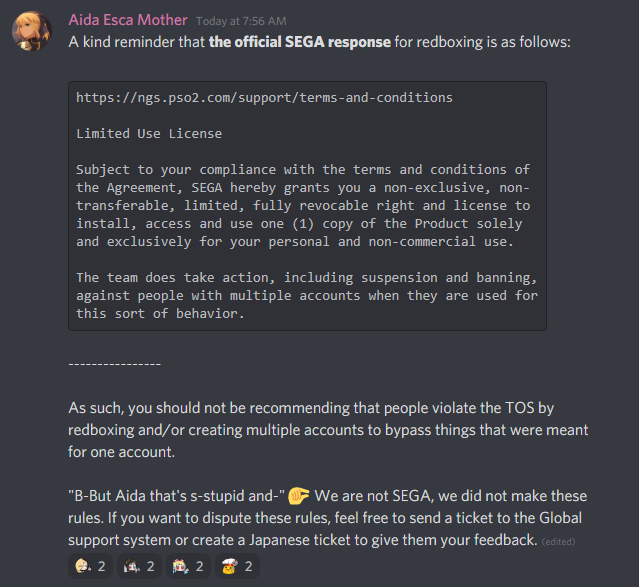 Disclaimer: Don't take the below as complaining as I'm merely curious to the possible reasoning involved as to why they don't just remove meseta from red boxes. I'm grateful they did this and don't mean to sound ungrateful like I don't appreciate the little things they do and "will never be happy"

This is a good step forward. But there'll be a treshold as to how "far" people can still go with this. How will they catch the people still misusing this? For all we know, they could now snipe cheap accessories or costumes for 13-20k and put those up for 200-300k and buy those on new/alternate accounts to avoid triggering measures monitoring grinders and or capsules. It'll be a bigger loss but a lot harder to track. I'm of course only assuming how they'd keep track of this.

If you track by IP, people could use VPNs that nowadays allow you to connect from any country to an account. If they track by the amount of meseta transferred between accounts...Well, that's gonna give way too many legit-user results.

I get wanting to give people an incentive to hunt red boxes but why not replace the meseta with SG then? Why MUST red boxes contain meseta? You wouldn't be releasing that much SG into the hands of the user that they could easily scratch away or spend on something else. In the meantime you'll solve the exploit issue (aside from multi-account weeklies.)

Just have those red boxes give SG, and dunk the meseta you feel you must give a new member into the beginner quests so they end up with that amount in their pocket one way or another. But getting all those red boxes is something a normal player would do through exploration, and by the time they start exploring like that they'll likely have more meseta one way or another anyway.

Having large sums of meseta laying around to easily pick up by a new account will lead to bottom-of-the-barrel sniveling swines making use of it the most selfish ways possible at the expense of everyone else's enjoyment.

Either way, I don't mean to complain though. Its still a good step into the right direction. Can't solve them all in one day. At least this shows that they are listening, no matter how slow the response.

You know, ignoring the bit where if its about a bigger exploit like the one with trading in PSO2-Classic that can directly affect their profits, they have no problem shutting the feature down immediately without hesitation for an extended period of time while this has been complained about to death since the game's launch back in June, resulting in our current economy.

Here's the full section of that ToS chunk (I just recolored it so it's not in light mode xD):

It always said this, it says nothing about using multiple accounts, all it says is that you can't have more than one copy of the game (stated in a way that's usually used to refer to making copies of a purchased game for pirating or other related things). It just looks like they copied a generic ToS agreement for this section for games that require you to purchase them. Technically this says nothing about not being allowed to use more than one account.

@A-Silver-King Interpretation. Doesn't say more than one account. And the way they have us linking different platforms to an account we technically have more than one copy of the game on our PC's, but hey, who cares about that? Also take special note of the last part of the sentence "Multiple accounts when they are used for this sort of behavior".

To reiterate, they ban for redboxing because RMT did it. I would wager to guess RMT started it and someone picked up on it and spread it around. RMT aren't going to actually play the game beyond that point and it becomes a dead account taking up space and wasting initial Player ID number.

I should point out, this has been out on fleet discord server for a while, someone’s showed it to me when we first talking about red box farming/alt accounts for weeklies. The only bit that seems new is Aida saying they have been contacted by sega, and Aida isn’t exactly the most trustworthy person, I would need more than their word before I would take it has an offical statement from sega.

I've discussed this on the official Discord a couple weeks ago: This isn't news and it's got little to do with PSO2.

Here's the Sonic Mania EULA from sometime in 2018 (it was updated several months after its 2017 release due to the Denuvo debacle). It contains exactly the same text as the PSO2 and NGS terms of use. In fact most Sega EULAs for some time contain exactly the same passage of text. Here's the one for Rome: Total War dated March 2012, with the same text.

Sega just have a habit of iterating a boilerplate EULA for all their games; "(1) copy of the Product" doesn't mean one NGS user account, because it is found in the EULA for several games that don't even have user accounts.

The reason this passage of text has been drawn to attention is because 3½ weeks ago Rappy Mod (a mod on the official Discord server) quoted it. Direct message link here, screenshot below:

As shown in the OP, the part of the message that appears in the screenshot "The team does take action, including suspension and banning, against people with multiple accounts when they are used for this sort of behaviour" has not been publicly stated. Aida states it was relayed privately, and while this is probably trustworthy (unless you doubt Aida and consequently believe they made it up) it has still never been publicly announced as disallowed.

I personally believe the official stance is that it is not allowed, but we are still regrettably not able to say that is the public official position. I'm hoping that day comes soon.

Lets put it this way, which is really simple. You can Play the microsoft store version, the epic store version, the steam version, and the xbox 360 version All without ever linking accounts. OMG now you have 4 accounts. . . Is this the fault of the player? They made account linking optional. They didn't hold a gun to anyones head stating link accounts OR ELSE. So they cant justify any kind of enforcement against multiple accounts: they made it possible themselves. They can enforce red boxing all they want but Multiple accounts is intrinsically possible by their own doing. You CAN link your accounts if you want to, or you can leave them seperate. They gave us that choice.

Not even going to call that a loophole, its just something that should have been obvious since they started releasing these things on other platforms without real logins to the service, but instead using accounts created by those seperate platforms automatically upon creating a character. And thustly the TOS cannot state account quantity restrictions. Cant even really state game copy restrictions, got 3 copies of the game since they wanna do these stupid platform-based bonuses. They cant even legally enforce that line of the TOS since they made a system that both allows and requires multiple copies of the game to receive platform specific bonuses. Shiyo
This post is deleted!
Shiyo
Reply Quote
last edited by
A
A Silver King

FYI rappy mod is a mod(not sega staff) and a GM(sega staff) said they have no stance on it last week.

FYI rappy mod is a mod(not sega staff) and a GM(sega staff) said they have no stance on it last week.

I'm aware, but good to share that with the topc too. We've had a few slightly conflicting statements in the first half of July and I feel it would be good to get a firm and first-hand announcement of what's not allowed.

Miraglyth
Reply Quote
last edited by
A
A Silver King

@Miraglyth Ya its weird getting conflicting statements. Hopefully they post something on the site soon.

lol all this extra trouble to enforce with no real official word from Sega. Just remove meseta from red boxes and make weeklies per character on your account. Less problems and less work for them that way.

Well nothing a non-sega staff has to say about it really matters in the end. always figured discord mod =| sega staff that can clarify

Reminder that each account is also a "copy" of the game Therefore this applies to redbox Therefore I TOLD YOU SO.