This topic has been deleted. Only users with topic management privileges can see it.
last edited by Ezodagrom

@Xaelon I could be wrong, but, it's possible that the map that will be available at launch may not be much bigger than what we had in the closed beta.

Based on the locations of the blurred names in the map that was shown in the puso ni comi episode in the jp pso2 channel last week, I marked in the CBT map below where I think the 4 areas that were announced yesterday are located: 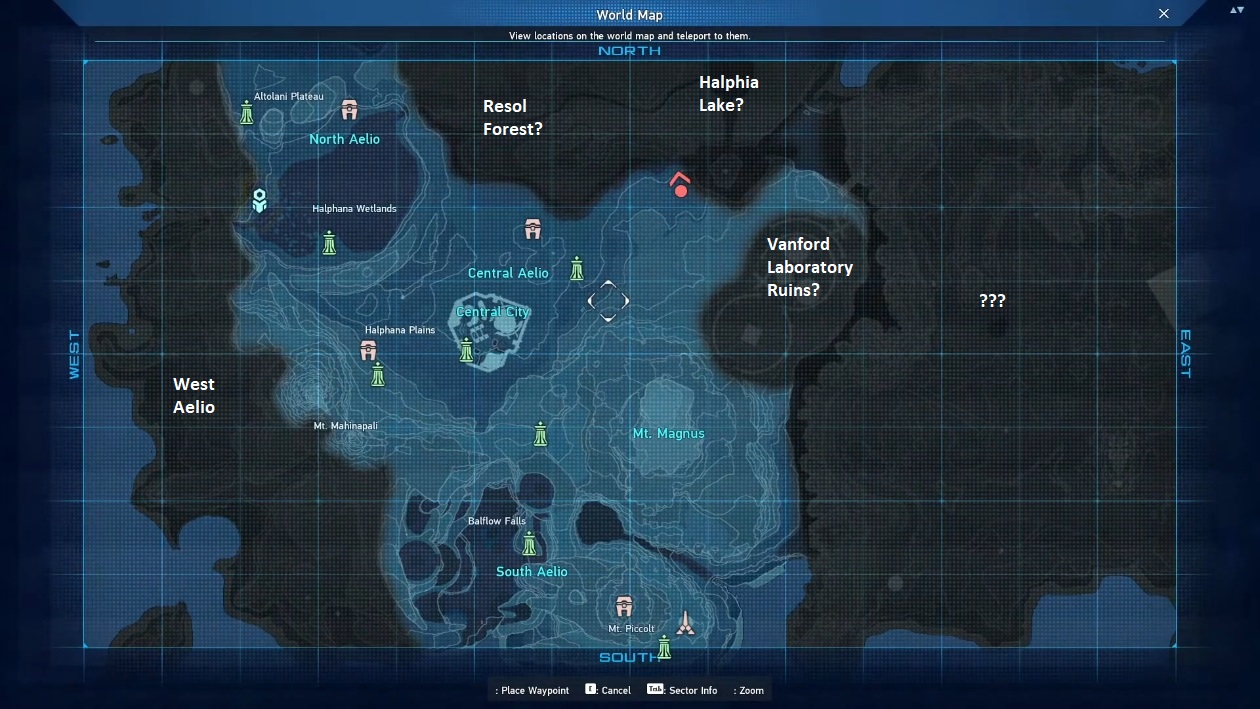 So when compared to the CBT, the additional locations where we can find mats would be the whole western section and maybe the lake in the northeast of central city (while vanford ruins and resol forest are combat areas).

The ??? region to the east, it's likely that it won't be available at launch at all (maybe it'll be the region added in the winter?)...

Mt. Magnus had no materials; it was just Central Aelio (Monotite), South Aelio (Dualomite) and North Aelio (Trinite), which all happen to be exploration sectors. If that's a consistent aspect of the exploration/combat distinction then only West Aelio and Halphia Lake will have materials, while Vanford Laboratory and Resol Forest as combat sectors would not.

North Aelio (Trinite) suffered primarily because it was small and didn't have many Trinite locations, and wasn't helped by some people not starting to gather Trinite until almost halfway through CBT which really ate into its already short respawn time. With more time and hopefully taking up some of the space to the west of the bordered-off area on the map, it won't really be a bottleneck for the few third-tier potentials you'll want to unlock unless potential costs are higher in the full game or these materials have other purposes.

It's possible 4★ equipment might have different potential unlocking costs as well, like perhaps starting at Dualomite and needing a fourth-tier material in one of the new exploration sectors. But that would be getting a bit further afield with speculation; the important thing is with weeks of respawning rather than two days, we'll have access to substantially more of those materials already and to anyone who doesn't mind spending a few minutes collecting them all those volumes of those items in the Rappy Dash pack are basically pointless and accomplish nothing other than inflating the pack's price.

@Miraglyth During the closed beta, for me my biggest bottleneck for upgrading equipment was actually meseta and not the materials, though I only played casually.

That makes sense; playing more gives a broadly constant proportion of meseta to playtime, but a reducing proportion of materials the longer you play after they have been gathered.

@Xaelon I could be wrong, but, it's possible that the map that will be available at launch may not be much bigger than what we had in the closed beta.

As I mentioned earlier in this thread:

Gathering materials may have been difficult during CBT, but that's likely due to the limited number of areas we had access to.

At launch I fully expect there to be multiple areas for each of the Mono/Di/Tri mats. Which should make it much easier to gather enough stuff to unlock potentials.

So yes, I agree that the difficulty gathering materials during the CBT was due to the limited number of areas we had access to.

When looking at the Start Dash Rappy Pack to enumerate, 30 days of Premium works out to $13 and 30 days of Material Storage is a bit more variable because of the scale purchase bonuses for SG buying but works out to $12 at the least cost-effective and $2.40 at the value of SG we're no longer making thanks to the loss of Mission Pass from nerfed Premium purchases. SDRP is $49 so that's $24 to $33.60 for four cosmetics and a bunch of worthless consumables.

When you remember that the original Ragol Pack was around that price even before you took out the Premium and then had more cosmetics and 12 AC scratch tickets, or that the Sonic Collaboration Pack was a slightly higher price after Premium was removed but had more cosmetics and better extras like expansions for Inventory (50) and Character Storage (250), this pack feels quite expensive. I'm hoping at least it'll give two of every cosmetic that needs two to be account-wide (presumably the [Fu] and STP), otherwise it'd be a bit of a joke at that price.

@Xaelon I think you misuderstood my post. I was saying that the number of areas available at launch that allow for gathering mats may still be quite limited, the launch version map doesn't seem like it'll be alot bigger.

@Ezodagrom I seemed to have missed the "not" in "may not be much bigger at launch" in your other post somehow.

I hope this isn't the case though. Here's to hoping the map we could view during the CBT isn't the whole play area at launch. If you do end up being right we'll have to hope the node respawn timer is 24 hours or less. Otherwise we'll be stuck having to gather every time nodes are up if you want enough resources to do anything.

Now if Sega would only give out the release date so we will know when we'll be able to find out.

If you do end up being right we'll have to hope the node respawn timer is 24 hours or less.

From all that I've heard, It's not clear what the timers are exactly, if they even are consistent. Though they seem to be very long (24hr or longer) according to most people. Unfortunately, in the response to the CBT2 survey, the team said that the current spawn rates for deposits is where they want it to be (despite negative feedback).