Sega/Microsoft you guys need to adapt your strategy and advertise by doing contracts with streamers/YouTubers.

This topic has been deleted. Only users with topic management privileges can see it.
last edited by Ezodagrom

@Miraglyth said in Sega/Microsoft you guys need to adapt your strategy and advertise by doing contracts with streamers/YouTubers.:

In a streaming world where every other game is super-awesome amazing I'm just not sure this is giving off the right vibe to attract new players.

One of the appeal of the popular vtubers groups (Hololive and Nijisanji) is the wide variety of personalities, some of them just have calmer personalities than others, some are just chill. Also I think the streamers in these groups usually have more genuine reactions than the every game is super-awesome type of streamer, though their reactions are still quite positive in general (though, I think it's likely that they just avoid games that they know they wouldn't like, after all, they want to be positive influences for their viewers).

And I'm sure they're very nice people too. But is the point to promote PSO2 to a new audience or to give the existing players of Ship 1 an occasional pseudo-celebrity visit to enjoy? I mean the latter is still a nice thing to do for players, but I don't think it's what Zeke was asking for with this topic.

Personally I really don't look at a Youtuber and think since they're having fun I should play said game. I think what they should really do is capitalize in moments in game that high-light what makes the game fun/worth investing time in or even focus on memes and their relation to the game.

@Maxwell On the Japanese side of things you especially see this with all of the merchandise (character drama albums, character songs, models for characters including the PSO2es character, and then even their adapted form of Puso Ni Comi that both encapsulates and parodies the Phantasy Star Online 2 experience, and more).

On the global side we have very little of any of this scope of how big Phantasy Star Online 2 is on the Japanese side of things or at least the Eastern side of things and in the censorship thread this is some of the "cut content" I would absolutely love to see show up on our end because our version of the game stands very well alone and on its own as an online game to play but there is no denial that there is a bigger world of smaller details and "treats" for players out there.

Though, even if SEGA were able to get huge streamers to play PSO2, I think it would be better to do it for NGS once it releases and not the base PSO2. There's only so much a streamer can do to make a game that is so messy in its early parts seem interesting, viewers will notice right away how overwhelming it is at the beginning, the problems with UI, enemies that die way too easily, they're just not gonna get interested in that. I don't think the end result of huge streamers playing the current PSO2 would be much different from the "pseudo-celebrity" visits, as you say.

When it comes to the hololive and nijisanji vtubers, it's not like they're unable to promote games with their approach, the early PSO2 just isn't really friendly towards creating entertaining content to watch especially when the streamer is a beginner at the game (other than the casino, which the sponsored vtubers did play on some streams).

And, well, as I said before, there's a wide variety of personalities in these vtuber groups, the ones sponsored to play PSO2 are a bit on the calmer side, but there's others that are alot more cheerful as well. Maybe if one of the more cheerful Hololive EN member were to get sponsored for PSO2, it could end up with more interesting streams (or maybe not), but then again, it's not a one side deal, for all we know SEGA may have already tried to approach Hololive EN for a sponsored stream and they weren't interested?

@VanillaLucia As a JP player I am aware of that as well. Like the PSO2 Merchandise there is pretty cool, I remember the monomate drinks they had and various class rings/keychains but on global there isn't much of anything nor are there real life events which PSO2JP has.

Luckily Maximilian Dood would gladly stream NGS when it comes out!

@RacsoZen Yeah, I think we'll be seeing more streamers in general playing once NGS arrives, even without being sponsored.

I wouldn't. I think there comes a point where if the only streamers / video makers available aren't going to generate enthusiasm for their viewers to play the game, maybe it's better to just not sponsor them than to insist on running a quota of sponsorships no matter how lacking in benefit for the game they'd be.

Though, even if SEGA were able to get huge streamers to play PSO2, I think it would be better to do it for NGS once it releases and not the base PSO2.

Yeah, it's not in the topic title but Zeke mentioned it in both paragraphs of the opening post so I'm pretty sure this topic is about looking ahead to NGS in particular.

@RacsoZen said in Sega/Microsoft you guys need to adapt your strategy and advertise by doing contracts with streamers/YouTubers.:

Luckily Maximilian Dood would gladly stream NGS when it comes out!

Honestly that's the only name I can even think of for someone who isn't already primarily a PSO2 content creator but has expressed excitement-generating interest in both PSO2 and NGS.

Speaking of this, I don't think the idea needs to be as simple as just sponsoring a streamer to do a quota (quantity or frequency) of streams. Clip and compilation videos also get clicks. It could be interesting either as part of a sponsorship term of a stand-alone effort to compile highlights of stream moments from multiple content creators into various highlight / reaction videos.

@Miraglyth Ah, since at the moment sponsored streams about NGS are not possible, I thought the topic was mostly about the current PSO2.

At the moment I think their current approach is fine, but I hope they're able to take a more global approach when it comes to sponsorships once NGS releases (instead of only ID vtubers).

I’d love to see Dunkey review this game but it’s not really his cup of tea, sadly.

They just need more advertising in general. I didn’t even know PSO2 made it to global until Steam release. Outside of MMO blogs I didn’t find anything about it.

Billboards in the middle of a pandemic 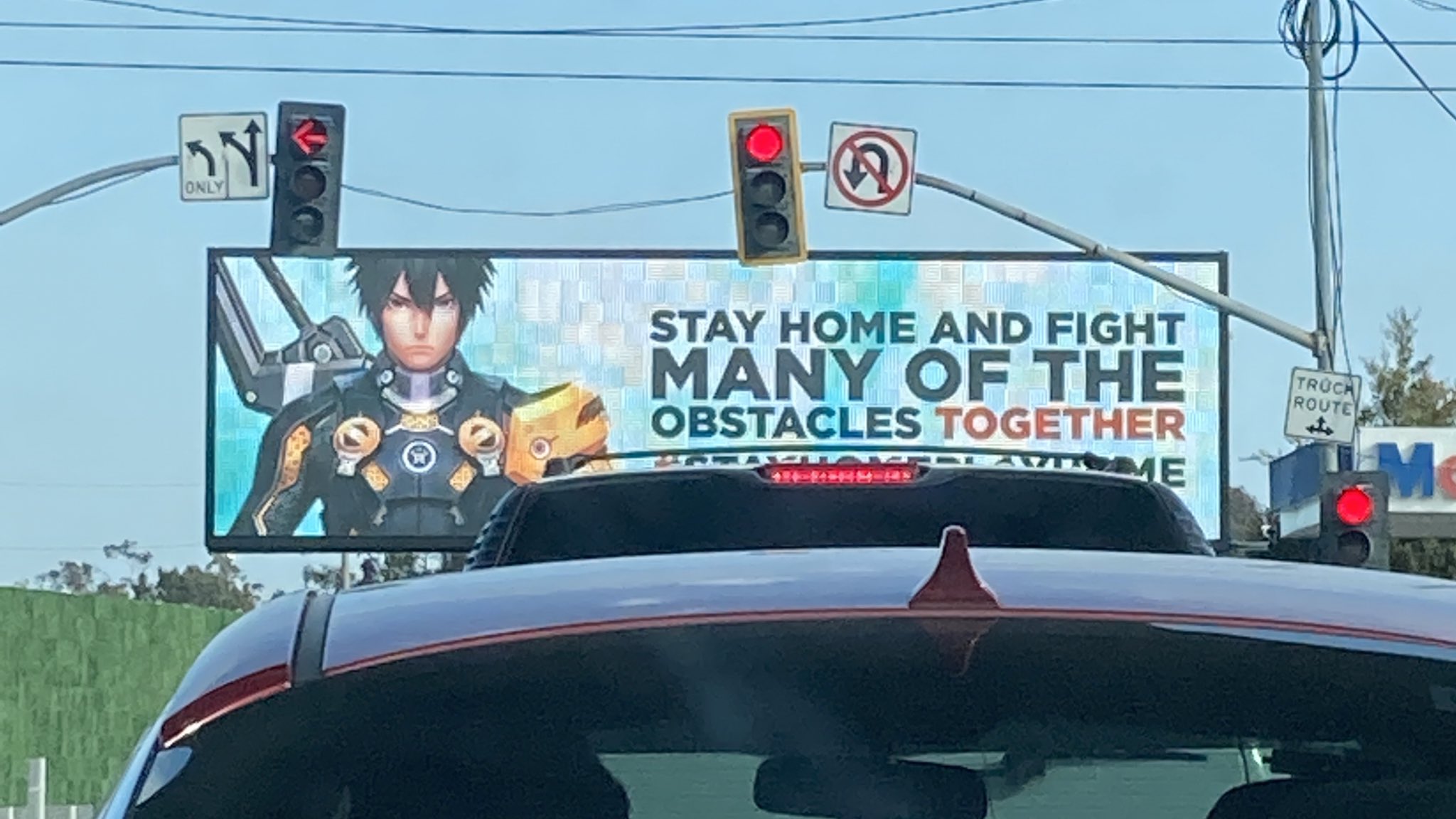 @HarmlessSyan said in Sega/Microsoft you guys need to adapt your strategy and advertise by doing contracts with streamers/YouTubers.:

Billboards in the middle of a pandemic

What State and/or is that in?