Client Order not working at all

This topic has been deleted. Only users with topic management privileges can see it.
last edited by
I
i48TonsOfSlaves

That's What Bein' A Ranger is All About

I have defeated these guys with Risa as a partner. I have tried defeating them on my own. IT WILL NOT COUNT THEM AS DEFEATED. What am I missing?

Hi there! Not sure, but I recommend you submit a ticket to support using the drop-down menu above. Click "contact us" then "contact us now." Then, after logging in with your MS account, you should be in the right area. 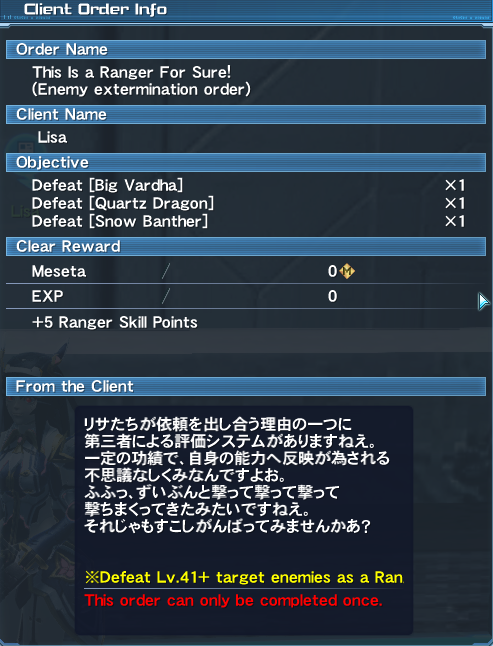 I am a Ranger. There is no level requirement. Anyone else have any insight other than submit a ticket?

What category do I submit a ticket under?

@i48TonsOfSlaves what he means is you are probably defeating lower level bosses from an easier difficulty than what it should be asking you to defeat due to bad translation. Have you tried killing a Lv41+ boss to see if that would register the kill? Looks like they missed a huge asterisk if it does register...

Here is the NA taken from my cell phone

@i48TonsOfSlaves it finally counted for me doing exploration on Hard.

She wasn't even my partner when I completed it.

Which one? There are 3 bosses to kill

Your guess was right. They neglected to mention the Level requirement. That's a big miss for 5 SP

@i48TonsOfSlaves yeah i just saw the pic you took, it's missing the entire blurb from the client lol...

Oh jeez, that seems like a really huge detail to leave out of the client order, I hope they fix it! Thanks for taking a picture of the NA version, I don't have access to the game so I don't know what's been changed!

In a similar category, you'll notice the client name as Risa. There are a couple client order descriptions that list her as Lisa.

I had the same issue with the Braver order. I think it's probably messed up for all classes.

Hello! We're addressing this issue, but thank you for providing additional documentation on it!