This topic has been deleted. Only users with topic management privileges can see it.
last edited by Viola Lance

I don't care about ages of virtual characters, but... Aina is part of new arks and she's just 15, also looks at the outfit she's wearing.

No more revealing that that of Margareta's "royal wardrobe" from EP.5, who is suppose to be what 14?

There are a cluster of NPCs ranging from modest to very little to the imagination in outfits they wear while being from a varying degree of ages with their designs of short to tall.

Comparing Aina to any of the current or past characters of near to similar age range, what she is wearing is seemingly modest - including thematic, given how the introduction starts off and ends. Not including how the other NPCs are designed in that specific region of the game / introduction hold similar aspects, not the same but similarities. Versus say Manon, Ran, Liu Li, Rossa and Oranje who if it wasn't for the difference in name and hair could all roughly be the same NPC with a generic wardrobe that doesn't stand out against the others. As well, outside of Manon looking like generic ARKs member, Crawford's gal pals seeming appear shorter than or close to her height Aina while being more ARKs themed in clothing.

If there wasn’t issues with something, this topic wouldn’t exist cuz the restriction wouldn’t have happened.

I just question who did it: ESTsoft, Sega, or maybe even Microsoft...

I'll assume it is most likely Microsoft's direction to ESTsoft working with Online R&D in collaboration with Sega to have the idea of a more westernization feel / approach versus letting the product do the work as intended, self imposed restrictions probably got placed during the first talks after given the time frame then. Focus Groups - who probably (I assume) made snark and snide of what was shown of the Players versus the content, but as well showed interest in in the game - which drew to what we have now versus what is in JPN.

I don't care about ages of virtual characters, but... Aina is part of new arks and she's just 15, also looks at the outfit she's wearing.

Yeah, you mean that outfit that I want when the related scratch comes out? Yeah, it's nice. Looks like it would be comfortable to wear in warmer weather, but still armored.

Also, I could understand if she was a real underage actor in a show, and they had her wearing something far more revealing, but that's not the case. She's not real, and thusly there are no ethical arguments to be made here. Same goes for the height issue. If people are getting that worked up over something so minor, they need to get out of the house, and live life better. People that focus that much on someone who's not flesh and blood, means they aren't focused enough on their own life, and getting that shit squared away.

It gotta take 8 years for them to lift the height restriction.

Probably when everyone is able to separate Reality and Fiction characters.

Height censorship in video games is and forever will be silly. Just as silly as someone telling you that you can't eat chocolate cause it is unhealthy for dogs to eat chocolate. 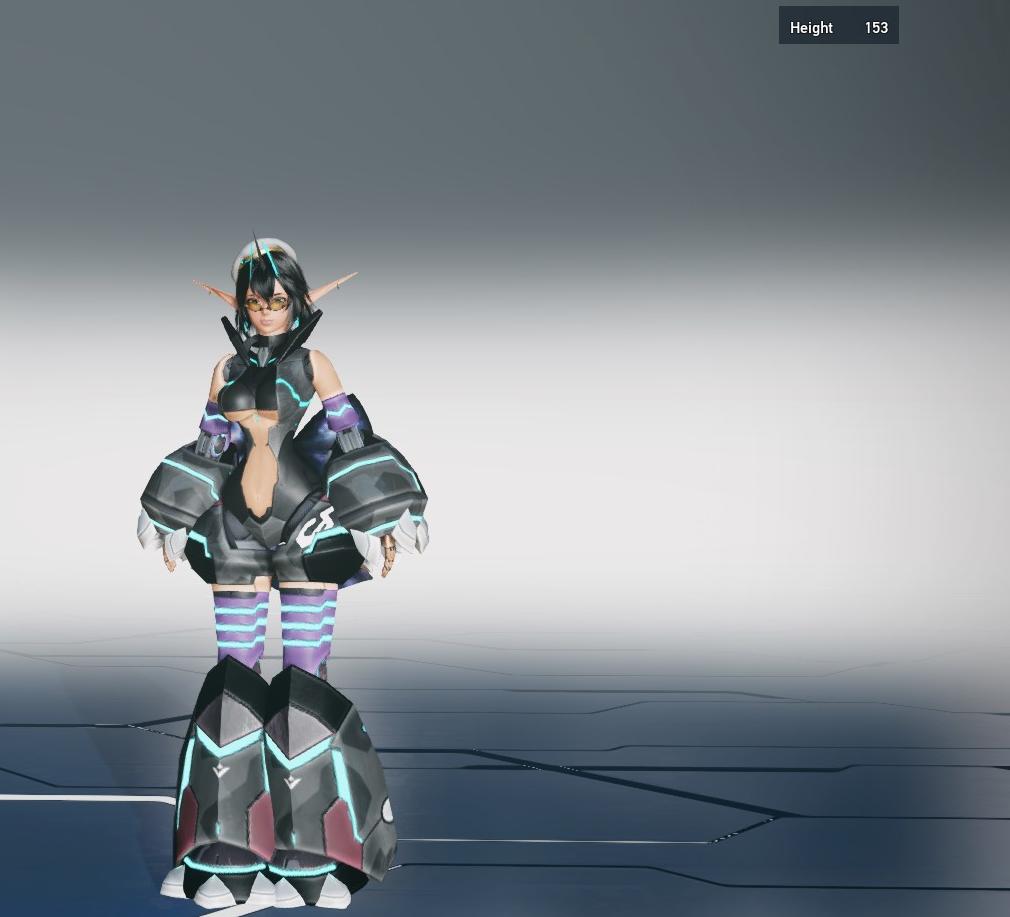 Probably the shortest I will achieve until they remove that obtuse restriction, and still not showing as much skin as those who sit at 160+cm

Now Just need a few extra stealth camos and I and live some arbitrary megaman fanfic crossover in real time.

I finally got a chance to settle down and do a size comparison with an npc.

And here the char creator from JP.

Now see? Why is there such a big issue about us being that height on NA? It’s literally making it to where we can’t make regular sized ppl, instead we have to make all characters Olympian sized that towers over npcs. XD

Been a while since I last posted on ye olde global Forums, but I show support for Height restriction removal, always have! although if it ends up like the last few posts, they'll find any silly excuse to shut the discussion down without any real explanation as to why the change was implemented in the first place.

I gave up hope for this a loooong while ago sadly, one of the main reasons I can't stand to play it full time, everyone else gets a representation, but if you're under 153 centimetres outside of Japan, then you shouldn't exist, or you're not appropriate for a western audience, pathetic honestly.

Just dont give up let try to gather a max amount of peoples who support the removal of height restriction.

We need to get more attention and hope our complaint end up in the JP team.

That no one official will get us the reason this was done, who decided, and on what basis it thought it was a good idea, is severely offensive.

We don't know who is responsible for this height restriction.

And I'm curious if SEGA are aware about this situation. lol

We don't know who is responsible for this height restriction.

And I'm curious if SEGA are aware about this situation. lol

They work on the game directly, and make all of our patches in game, of course SEGA knows.

@Anarchy-Marine The question is more along the lines of, does SEGA actually know that's not what the playerbase wants, is ESTsoft sending our feedback saying we don't want it or even are they falsely claiming we love it, and is Microsoft involved in keeping the restriction

At this point the most likely answer is they don't want SEGA to know how much we hate it becuase then they would be forced to change it.